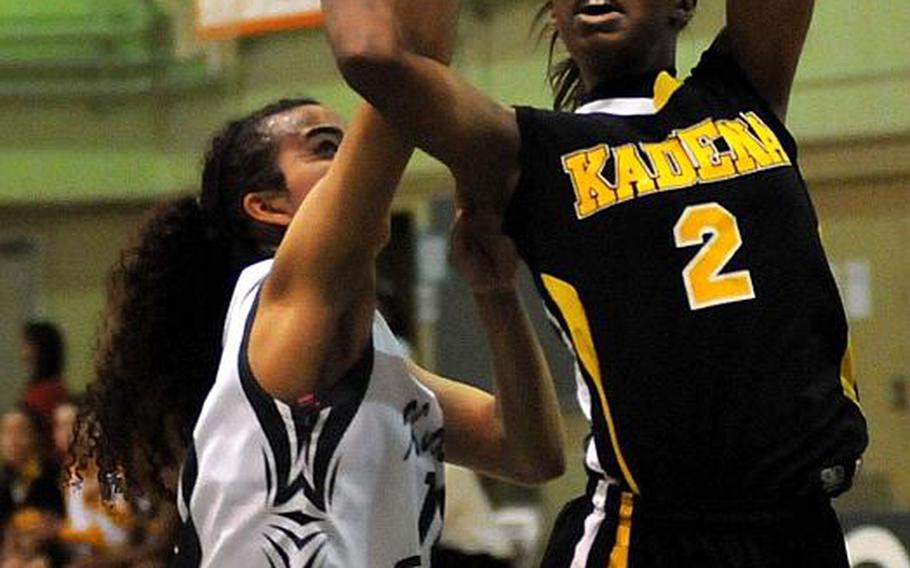 Kadena's Jasmine Rhodes shoots past Kubasaki's Ameyna Saunders-Jackson in a December matchup. The two teams take on adults this weekend in a Martin Luther King Day tournament in Okinawa. (Lisa Tourtelot/Stars and Stripes)

CAMP FOSTER, Okinawa – In-season tournaments have been a big role in why Kadena’s and Kubasaki’s boys and girls basketball teams are the most decorated in Far East Division I Tournament history, coaches say.

The next two weeks see the Panthers and Dragons entered in the Martin Luther King Invitational Tournament for adult teams at Marine Corps Air Station Futenma, followed by the Okinawa-American Shootout featuring Japanese teams at the Risner Fitness Center on Kadena Air Base.

“It’s always been an important part” of the schedule, said longtime Kadena boys head and assistant coach Robert Bliss, “but this year, that has increased because of the takeaways.”

Bliss was referring to two tournaments that have come off the board for both schools. The New Year Classic, held from 2007 to 2013 in the Kanto Plain, has been canceled and each school’s teams stopped attending the Hong Kong International School Holiday tournament in 2011 due to restrictions on homestays for student-athletes.

“We’re happy for any kind of games. It’s great that we get to play them” every year, Bliss said.

Marine Corps Community Services sponsors the MLK Tournament and has waived the entry fee for the high school teams since they began playing in the event in the mid-1990s.

The 11 men’s and two women’s adult teams in the MLK play “a lot more physical and we have to be ready to adjust to that style of play,” Kubasaki girls coach Bob Driggs said. “We have to use speed and not be afraid to shoot threes instead of slugging it out under the boards.”

Sandwiched between the MLK and the Shootout are semester final exams, limiting the amount of time the teams have for practice in the run-up to the tournaments, coaches said.

The MLK and Shootout are “a good learning experience for us, but our base is being student-athletes,” Driggs said of the finals.

With those semester exams looming, DODDS teams in other districts are restricted from making weekend long-haul journeys to outlying bases.

Among the outlying schools, Matthew C. Perry and E.J. King’s basketball and wrestling teams have the weekend off. Robert D. Edgren hosts Kamikita on Saturday in boys and girls basketball.

And Guam High opens the boys basketball season with home games Friday and Saturday against Notre Dame and Southern.

On the mats, DODDS Korea’s four teams get together Saturday at Seoul American for an individual freestyle tournament, while the Kanto Plain’s six teams gather at ASIJ for a dual-meet tournament.