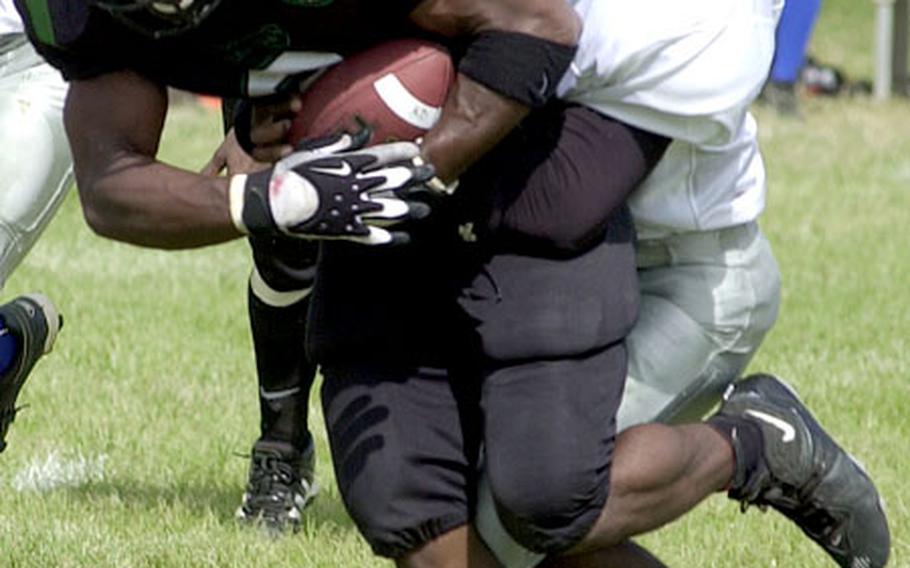 Kadena Dragons running back Trent Beavers is tackled by Darryl Davis of the Schwab Panthers during Saturday&#39;s game at Camp Courtney. Beavers ran 13 times for 156 yards and four touchdowns as the Dragons routed the Panthers 50-7. (Dave Ornauer / S&S)

Kadena Dragons running back Trent Beavers is tackled by Darryl Davis of the Schwab Panthers during Saturday&#39;s game at Camp Courtney. Beavers ran 13 times for 156 yards and four touchdowns as the Dragons routed the Panthers 50-7. (Dave Ornauer / S&S) 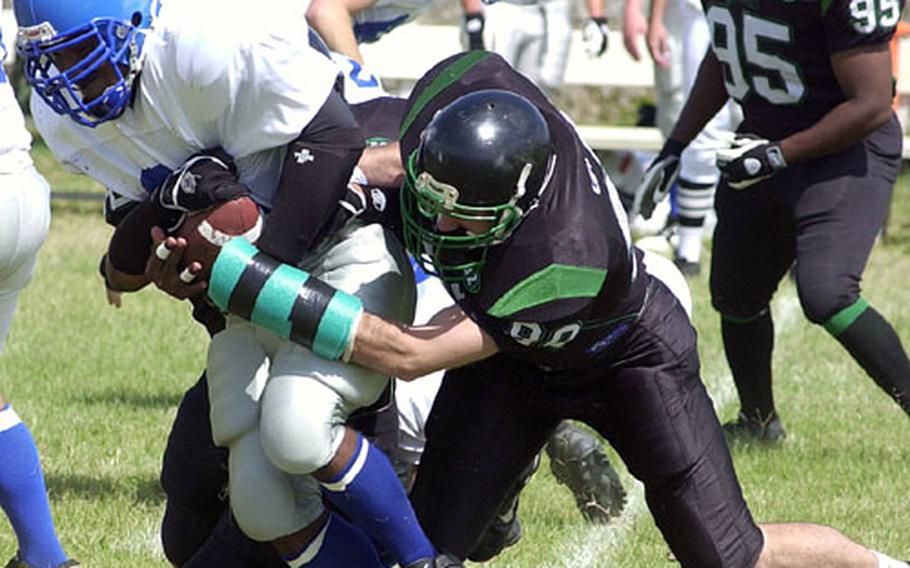 CAMP COURTNEY, Okinawa &#8212; Coach Will Cupp insists his Kadena Falcons are no one-trick pony. All-purpose back Trent Beavers might be his poster child.

Beavers racked up 232 all-purpose yards, rushing for four touchdowns, returning two kickoffs for big yardage, even blocking a punt, powering the Kadena Dragons to a 50-7 rout of the Schwab Panthers on Saturday as the Okinawa Football League resumed after a one-week hiatus due to bad weather and its effects.

Saturday was a day of blowout victories, as Foster-Futenma matched Kadena&#8217;s first-place pace with a 40-0 romp over Courtney-Hansen.

It was the first OFL action since Oct. 3. All three scheduled Columbus Day weekend games were scratched because rain associated with Typhoon Ma-on rendered Courtney Bowl unplayable. All told, five of the league&#8217;s first scheduled 12 games have been postponed due to weather.

Beavers had lots of help: Quarterback P.J. Robinson rang up 192 offensive yards, ran for a TD and passed for another; and linebacker Sam Wicks had three takeaways, including a 68-yard interception-return touchdown.

In scouting Schwab, Cupp said he&#8217;d noticed its defense had trouble with outside containment and would be susceptible to plays such as 44 Lead.

Beavers ran 13 times for 156 yards, returned two kicks for 71 and caught a 5-yard pass from Robinson, who went 6-for-13 for 160 yards, hitting Christopher Clarke with a 75-yard first-quarter TD pass and later running 9 yards for another score. Robinson had 32 yards on 13 carries.

A balanced Bulldogs running attack punished the Titans for 277 yards on 55 carries and four touchdowns. Foster-Futenma forced six turnovers and recorded five sacks in holding Courtney-Hansen to 43 yards, while the offense ground out 355 yards.

But the score could have been more lopsided, coach Lee Mew said, were it not for 175 yards on 15 penalties, nine of them personal fouls.

Warner Murphy ran 21 times for 96 yards and a touchdown. Jimmel Hardgrove added 41 yards and a TD on seven attempts. A.J. Hickman scored twice on quarterback sneaks and went 4-for-7 for 77 yards, including a 28-yard scoring strike to Donald Palmer, who caught four passes for 65 yards.

Defensively, Adrian Virges had two fumble recoveries and two sacks, and Clifford Sales had a sack and returned an interception 46 yards for a TD.

Thomas Aragon went 5-for-15 for 65 yards and Willie Simmons recovered a pair of Foster-Futenma fumbles before being ejected late for unsportsmanlike conduct.