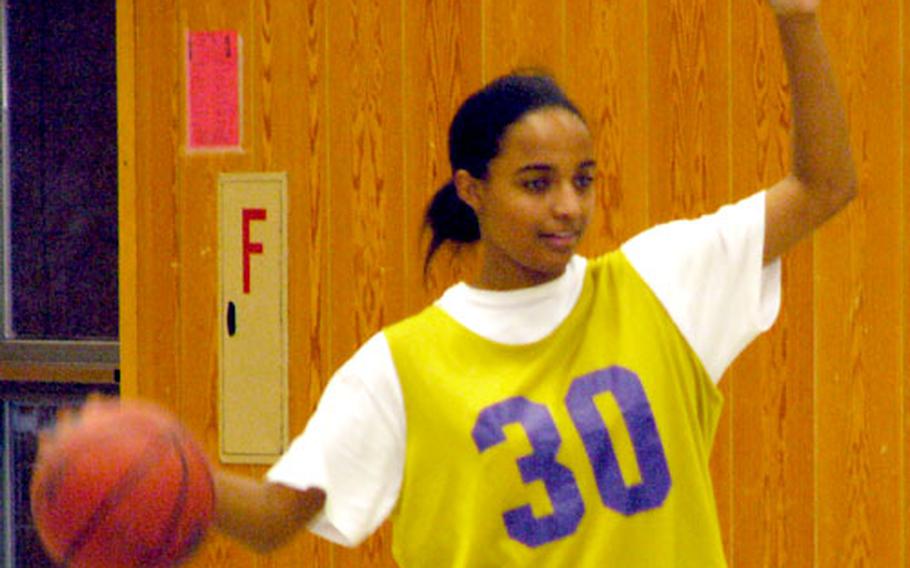 Mannheim sophomore guard Nyeshia Green is averaging 15.9 points a game for the Lady Bison, who are 7-2 overall and 3-0 in league play this season. Mannheim was 2-10 two seasons ago. (Rusty Bryan / S&S)

MANNHEIM, Germany &#8212; Two years ago, Nyeshia Green was a Mannheim middle schooler who couldn&#8217;t wait to play for the Lady Bison varsity, a team that went into that season&#8217;s Division II tournament with a 2-10 record.

Green and the Lady Bison both have come a long way.

This season, Mannheim is 7-2 overall and 3-0 in league play. Green, a 15-year-old sophomore, is averaging 15.9 points, four rebounds, four steals and two assists per game.

Those wins are due partly to players such as Green and teammates Amanda Knox and Kelsey Chavarria, who have breathed life into head coach Adrian Crawford&#8217;s system.

Like all of the Lady Bison, Green has bought wholeheartedly into Crawford&#8217;s system.

&#8220;We go out there and play good team basketball,&#8221; Green said prior to a lively Monday practice session which saw the Lady Bison honing their zone defense and transition game. &#8220;When we do that, everything else takes care of itself.&#8221;

Taking care of everything else is the essence of the system, according to Crawford.

As an example, one of those details has Green &#8212; who has found the three-point shot just out of her range &#8212; elevating her already potent scoring.

The detail paid off in Mannheim&#8217;s 43-21 victory on Friday against Black Forest Academy.

Crawford pointed out that Knox, a senior leader who endured that 2-10 season with him, has also helped Green&#8217;s scoring average.

It also emphasizes the team concept the Lady Bison swear by.

Crawford said Green&#8217;s scoring is also helped by her defensive prowess, particularly her skill at stealing the ball.

Crawford intends to see the team keep having fun, all the way through the European tournaments, which will be held at Mannheim from Feb. 22-26.

Easy enough to go from near-worst to first in just three seasons?