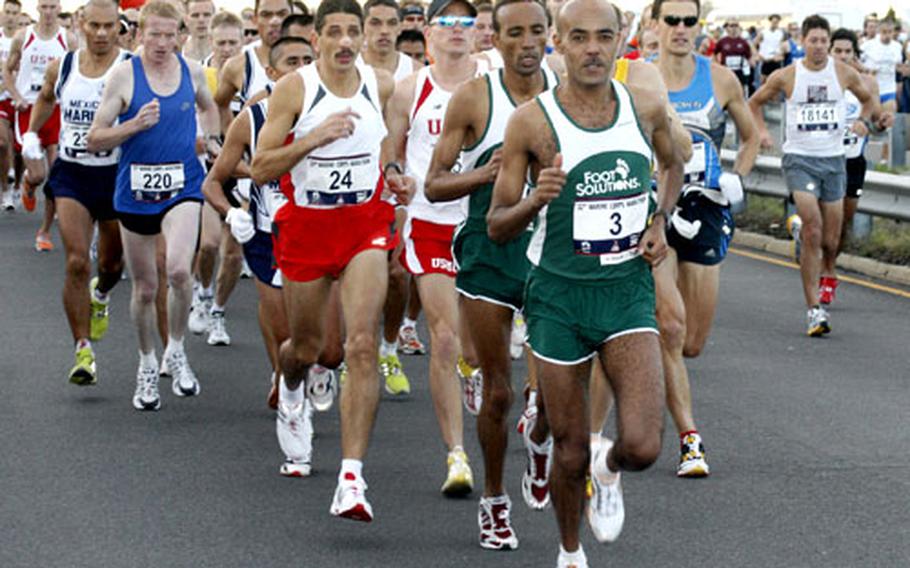 Tamrat Ayalew (3) of Atlanta, Ga., jumps out to an early lead as the runners break from the starting line at Sunday&#39;s Marine Corps Marathon at Arlington, Va. Ayalew won the race in a time of 2:22:18, two minutes ahead of runner-up Ruben Garcia. (Joe Gromelski / S&S)

ARLINGTON, Va. &#8212; Tamrat Ayalew, originally from Ethiopia, won the 2007 Marine Corps Marathon on Sunday, with an unofficial time of 2 hours, 22 minutes and 20 seconds.

About 20,000 people competed in the chilly, windy weather.

The first servicemember to cross the finish line was Air Force 1st Lt. Brian Dumm, who is stationed at Osan Air Base in South Korea.

Dumm, 24, whose unofficial time was 2:28:27, said it was great to participate in the rivalry among the services.

&#8220;It was a great honor to compete with them, next to them and against them, and of course it was great to come out on top,&#8221; said Dumm, originally from Fairfax, Va.

Navy Lt. j.g. Stephen Slaby was the second servicemember to finish, with an unofficial time of 2:29:18.

Army 1st Lt. Ivan Castro, who ran in the Army Ten-Miler earlier this month, ran in his first marathon since losing his eyesight in Iraq.

Both of his guides finished, and Castro said he had no doubt that he would as well.

Before the starting gun Sunday, Mark McVicker hugged two members of the Pentagon Channel who were running in the marathon to honor his son.

Mark McVicker, 48, said he met one of the people from the Pentagon Channel at this year&#8217;s America Supports You Freedom Walk in his hometown of Alliance, Ohio.