New DODDS-Pacific director Diana Ohman, who served the past 10 years in the same capacity in Europe, said she is open to adding track, softball and baseball championships to the Far East Activities Calendar. “There has to be planning time. It doesn’t happen overnight,” she said. (Dave Ornauer/Stars and Stripes)

New DODDS-Pacific director Diana Ohman, who served the past 10 years in the same capacity in Europe, said she is open to adding track, softball and baseball championships to the Far East Activities Calendar. “There has to be planning time. It doesn’t happen overnight,” she said. (Dave Ornauer/Stars and Stripes) 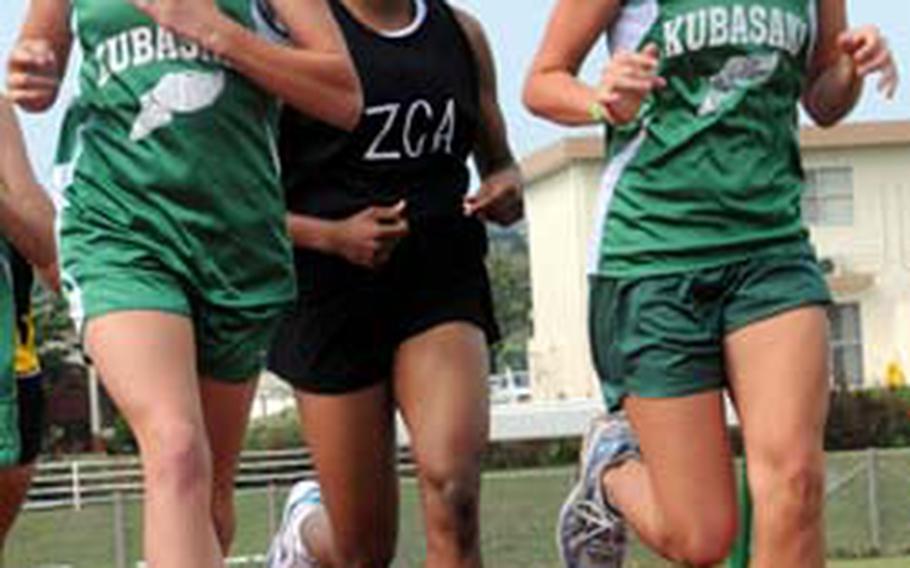 Kubasaki&#39;s Abbi Wall, left, and Jessica Powell, both underclassmen, could be among the first beneficiaries if DODDS-Pacific adds a Far East track and field meet to its activities calendar. (Dave Ornauer / S&S)

For years, baseball, softball and track athletes have suffered as their spring soccer counterparts would pack off to Far East tournaments while they sat home during May.

Ohman spoke Friday of making track, softball and baseball part of the Far East Activities Calendar during a wide-ranging interview with Stripes at DODDS-Pacific&#8217;s headquarters here.

The lifelong educator, who served the past 10 years in the same capacity in Europe, arrived in the Pacific with a reputation as a &#8220;sports enthusiast&#8221; with &#8220;new ideas&#8221; that could benefit Far East sports.

&#8220;One of the reasons I was willing to come was that I think we can add some things and make them our own and improve the chances and opportunities for young people,&#8221; she said.

Issues such as financing, weather, where the meets can be, how long they last, pitching arms, the two-week Advanced Placement testing period and Japan&#8217;s Golden Week travel period must be overcome.

One thing that might help is a new procurement system for buying air passage for student-athletes to Far East tournaments. Instead of base airline ticket offices, districts are now buying from local contracted vendors at a &#8220;huge&#8221; savings, Ohman said.

Just for Far East tournaments in November, the new system resulted in a 51 percent savings from a year ago, or more than $235,000. All of it stays within the activities budget, Ohman said.

Options include adding days to existing events, such as tennis, cross country and wrestling meets &#8212; or even readmitting non-DODEA schools to those meets.

&#8220;We would have to ensure that host schools have adequate facilities and sufficient billeting,&#8221; Hobbs said. &#8220;If non-DODEA schools are added to the mix, we will have to look closely&#8221; at optimum team levels.

Basketball, volleyball and soccer tournaments, to which non-DODEA schools are invited, are &#8220;working fine,&#8221; Hobbs said. &#8220;Teams are playing regularly and no team is being asked to play too many games. The question might be, do some of the tournaments have too many teams?&#8221;

Whatever the outcome, all those efforts, Ohman said, are being made toward the betterment of activities and students who participate.

&#8220;I&#8217;m not going to rule out one thing until coaches, athletic directors, principals, superintendents and military leaders have had some input, then some thoughts about organizing, time and expense have to be added in,&#8221; Ohman said.

Sports, Ohman said, is what got her through high school and &#8220;I just never let go.&#8221; They teach things that students cannot get in the classroom and are a perfect training ground for life, she said.