Netanyahu warns of widening conflict over Iran's actions in Syria 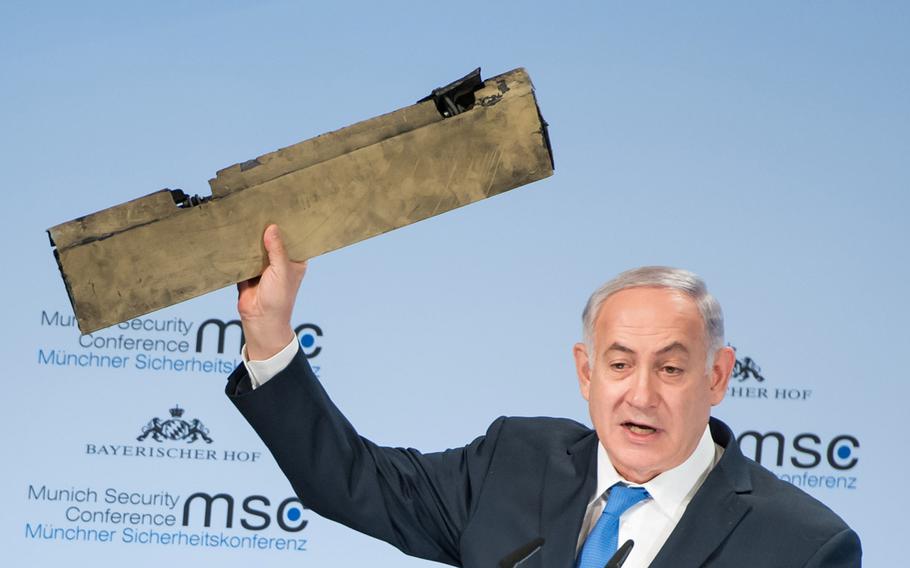 MUNICH — Prime Minister Benjamin Netanyahu, holding an alleged piece of a shot-down Iranian drone, warned Sunday that Israel it is ready to wade into the conflict in Syria - where it sees a growing Iranian threat.

In the aftermath of the Islamic State group’s demise in Syria, Iran “is trying to colonize Syria” with military bases that it wants to use to target Israel, Netanyahu told global leaders at the end of a three-day security conference in Munich.

“Mr. Assad understands if he invites Iran in he obviously is challenging us to a different position than the one we have,” said Netanyahu, warning a wider conflict looms.

“The hour for preventing war is getting late,” he said.

In Munich, where 11 Israeli athletes were killed by Islamic terrorists in 1972, Netanyahu suggested the Obama administration’s 2015 nuclear deal with Iran was like the 1938 Munich Pact that appeased the Nazis and led to World War II.

At the Munich Security Conference, the U.S. also brought a hard line to partners in Europe, who are wary about the Trump administration’s desire to change the Iranian nuclear deal.

U.S. National Security Adviser H.R. McMaster on Saturday said flaws in the nuclear agreement must be addressed. He also scolded Germany for allowing Iran’s Mahan airline to land at Munich’s airport, saying it might as well “cut a check” for Iranian terrorist activities.

“When we look at the biggest trading partners with Iran, we of course see Russia, we see China,” McMaster said. “But we also see Japan, South Korea and Germany. It’s time to focus business intelligence efforts to figure out who we are really doing business with and cut off funding.”

Former Secretary of State John Kerry, an architect of the nuclear deal with Iran, mounted a defense of it, saying it wasn’t perfect but that it bought the international community time to find a permanent solution.

Iranian Foreign Minister Mohammad Javad Zarif, who took the stage after Netanyahu, said the characterization of Iran’s role in the region was “hysteria.”

“We do not want to be the hegemony in the region,” Zarif said. “We believe the era of hegemony is long past.”

Zarif called Netanyahu delusional, and warned of consequences should the nuclear agreement be torn up. “If Iran’s interests are not secured, we will respond seriously,” he said.

But Netanyahu said the international community should impose sanctions on Iran that are “crippling.”

Meanwhile, some foreign leaders expressed unease. While the U.S. called on China to use its influence to pressure North Korea to give up its nuclear program, the Chinese delegation in Munich said it was doing all it can.

“I have to disappoint you, China does not have the magic tool,” said Fu Ying, China’s foreign affairs chief in parliament.

But on Sunday, the conflict in Syria and question of Iran’s intentions in the broader region was the hot button issue.

On Feb. 10, Israel shot down a drone it says crossed Israeli airspace. Israel then targeted an Iranian command-and-control center in Syria as well as air defense batteries, Netanyahu said. An Israeli F-16 was shot down during the operation.

“Israel has red lines it will enforce,” Netanyahu said. “We will act without hesitation to defend ourselves.”

Israel will “attack Iran itself,” if needed, he said.

Some of Netanyahu’s views coincided with McMaster, who a day earlier accused Iran of trying to extend its influence across the region with a wide range of proxy forces.

“The time is now, we think, to act against Iran,” McMaster said.