Naples' Genesis Mendez scores two of her 10 points on Friday, Feb. 1, 2019, in the Wildcats' 58-29 victory over the Aviano Saints. (Kent Harris/Stars and Stripes)

Naples' Genesis Mendez scores two of her 10 points on Friday, Feb. 1, 2019, in the Wildcats' 58-29 victory over the Aviano Saints. (Kent Harris/Stars and Stripes) Naples' Mia Rawlins and Aviano's Alyssa Hardy chase the ball down the court in the Wildcats' 58-29 victory over the Saints on Friday, Feb. 1, 2019. (Kent Harris/Stars and Stripes) 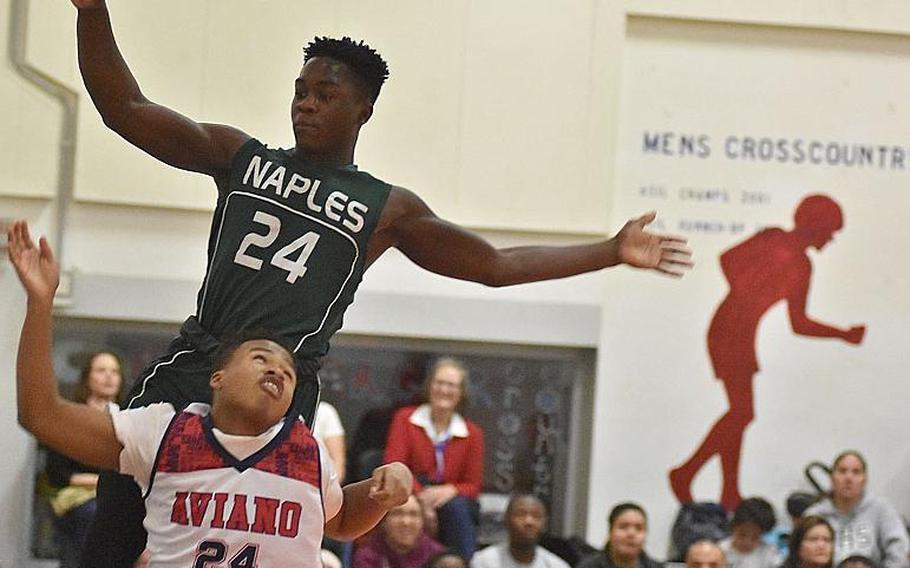 There was no question of which No. 24 could jump higher Friday night. But Aviano's DJ Vaughns managed to get off his shot and score in the Saints' 51-44 victory over Naples' Ashton Jeanty and the Wildcats. (Kent Harris/Stars and Stripes) Naples' Tye Thompson led his team with 20 points on Friday night. But he had to work hard for almost all of them against an aggressive Aviano defense. (Kent Harris/Stars and Stripes) 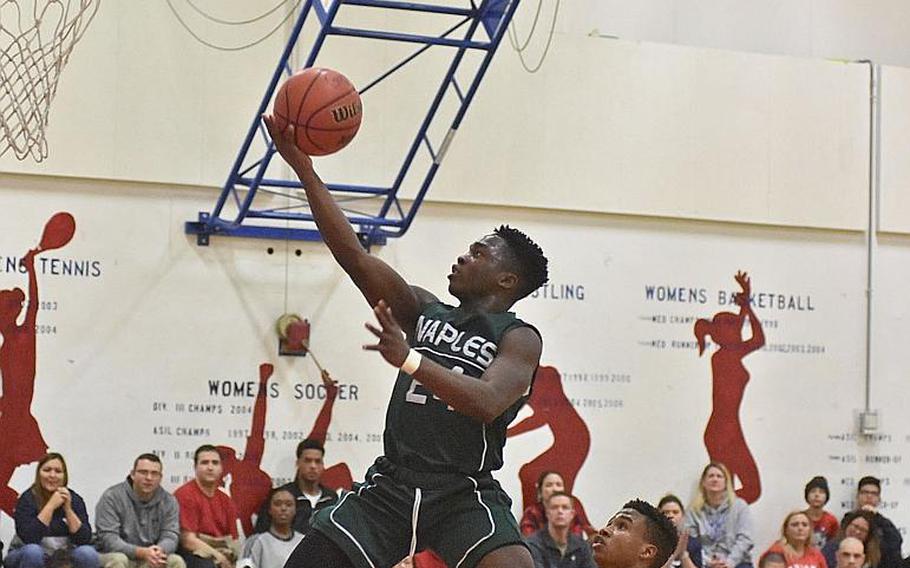 Naples' Ashton Jeanty goes to the basket for two of his 13 points in the Wildcats' 51-44 loss to the Aviano Saints on Friday, Feb. 1, 2019. (Kent Harris/Stars and Stripes) Naples' Roxanne Sasse gets up a shot and scores while surrounded by Aviano defenders in the Wildcats' 58-29 victory over the Saints on Friday, Feb. 1, 2019. Sasse had a game-high 23 points. (Kent Harris/Stars and Stripes)

AVIANO AIR BASE, Italy – Due mainly to geography, the Naples girls basketball team doesn’t get as many games against Division I competition as its peers.

That might be a good thing this year for the rest of D-I.

The Wildcats, 3-2 against large schools, doubled D-II Aviano on Friday, never trailing in a 58-29 blowout.

Naples lost games to Stuttgart (6-1 overall) and Vilseck (6-2) in early December and hasn’t lost since. Senior point guard Victoria Sasse twisted an ankle early in the game against the Panthers and didn’t play the rest of it. And center Trixie De La Cruz was injured in the second practice of the season and hasn’t played at all.

Coach Tim Smith said he expects that to change soon. But don’t try to get him to play up his team’s chances at the European championships, which are now less than three weeks away.

“We just want to play well,” he said, shaking his head with a smile while declining to make a prediction.

Roxanne Sasse, Victoria’s younger sister and an All-Europe selection a year ago, wasn’t offering much more.

“My goal is to make it out of pool play (at the championships),” she said.

In order to beat the top teams, she said, it’s going to take “a lot of hard work, hustle, passing the ball around and just not giving up.”

Sasse had a game-high 23 points Friday by doing most of those things. But she had plenty of help. Mia Rawlins had 14 points and seven rebounds, while Genesis Mendez added 10 points and a game-high eight rebounds. Victoria Sasse scored seven points and had four steals as the Wildcats forced the Saints into 26 turnovers.

“They’re very disciplined,” Aviano coach Monique Jones said. “They know who their shooters are and they get them the ball.”

Keyona Williams and Alyssa Hardy had eight points each for Aviano.

BoysAviano 51, Naples 44: The Saints’ 1-3-1 zone defense frustrated the Wildcats, who could never quite recover from a 21-point Aviano second quarter in a loss.

Aviano’s reserves actually outscored the starters, who combined for 13 points.

“That’s a bit misleading,” said coach Kevin Lehde, who said that DJ Vaughns normally starts for the team. Vaughns, who arrived at the gym just before the game, led the team with 16 points after sitting out the first few minutes.

Still, Lehde was particularly happy with the play of reserves Emmit Martin and Logan Hinchcliff, who combined for 15 points and six rebounds, and hit key shots down the stretch to help hold off the Wildcats.

But the Saints scored the last five points to improve to 8-2 on the season. Their only defeats thus far are a long trip to Rota that didn’t include any of the coaching staff.

“I was happy with our rebounding, especially,” Lehde said. “Just about every game we have, we’re out-sized. So we have to box out and be smarter. If we do that, we can take advantage of our depth.”

Thompson had 20 points for Naples, but had to really work for them, scoring most of his points on heavily contested drives or on free throws after them. Ashton Jeanty (13 points, 12 rebounds) also put up a lot of shots.

“They just outplayed us,” Naples coach Craig Lord said, citing the Saints’ defense as the likely source of his two stars’ frustrations. “They cut off our passing lanes, so they just decided to take it to the basket.”

The two schools meet again Saturday. Naples then hosts D-III Sigonella the following weekend to end the regular season, while Aviano doesn’t play next weekend and finishes up against D-I Vicenza.