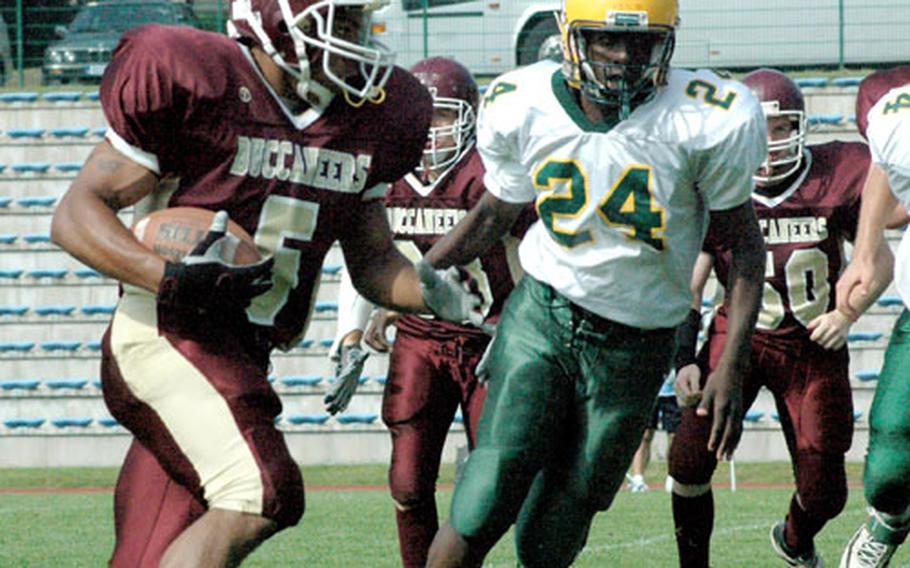 Baumholder senior running back Rashad Taylor turns upfield earlier this season against SHAPE. In the Bucs’ three games this season, Taylor has rushed for 698 yards and 12 touchdowns. (Courtesy of Dave Schwab)

Before coming to Germany, Rashad Taylor didn&#8217;t give much thought to playing football.

The 5-foot-10, 200-pound senior had taken up the game as a youngster in Pennsylvania, but quit playing when he got to middle school.

He didn&#8217;t resume playing until two years ago when he arrived in Baumholder and came under the tutelage of Bucs&#8217; coach Carter Hollenbeck.

He&#8217;s now one of the premier players in Europe with 698 yards rushing and 12 touchdowns through three games and he&#8217;s in position to academically and athletically circulate his highlight video among college coaches.

With his 16.6 yards-per-carry average, the 18-year-old Taylor may have the ability to play college ball somewhere. But unlike most Europe-based college prospects, Taylor thinks his chances to play on the next level were enhanced, not hindered, by his stay on this side of the Atlantic.

&#8220;If I had stayed in the States,&#8221; Taylor said Monday as his teammates watched a video of their 41-14 conquest of Mannheim last Friday night, &#8220;I never would have played football again.

Against Mannheim, he gained 303 yards on 18 carries, six of them for touchdowns. At middle linebacker, he stepped into a hole at his own 1-yard line on the last play of the first half and stood up Mannheim ballcarrier John Trosper &#8212; a 6-2, 190-pounder &#8212; short of the goal line to preserve a 34-7 halftime lead.

He powered through several of them on Friday, most notably on a 9-yard TD run in the second quarter that left two defenders&#8217; ears ringing.

The hard-to-tackle Taylor said he prefers finesse to power.

Given the size and experience of his offensive line, Taylor&#8217;s directional sense is well-advised. The only new face on the line is 6-foot, 270-pound tackle Evan Stroup.

Stroup&#8217;s not the only Stateside influence on this year&#8217;s Bucs. Hollenbeck has four volunteer coaches who played college ball, including two who started for Army.

In the process, they&#8217;re helping Taylor become even more dangerous.