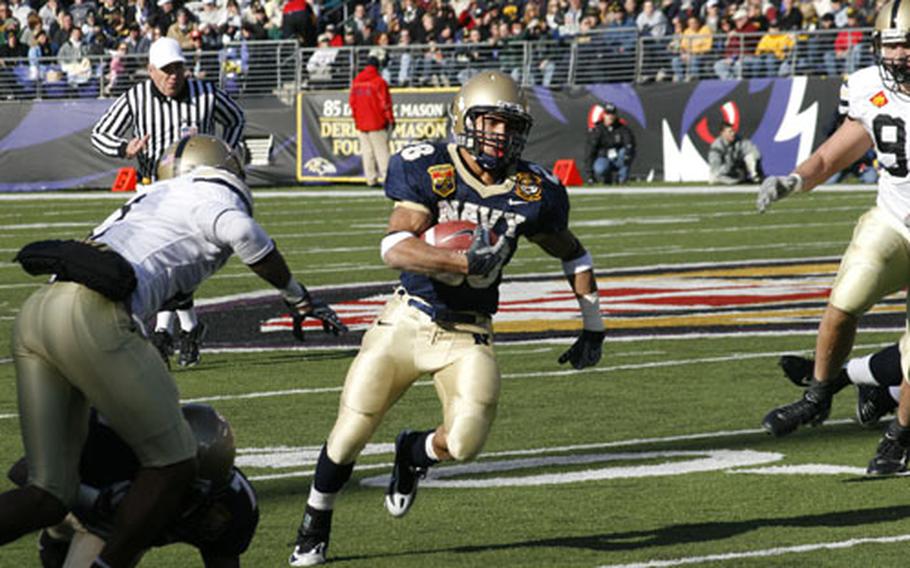 They might want to rename the Army-Navy Game, the Navy-Army Game or just the Navy Game.

Navy, 8-4, won its record sixth-straight Army-Navy game with a 38-3 route of Army on Saturday in the 108th meeting of the two academies. The Midshipmen will also keep the Commander-in-Chief trophy after sweeping the other service academies for the fifth-straight season.

Army, 3-9, could move the football, but could not score -- and that was the story of the day. Navy didn&#39;t move the ball at will like they often have this year, but they played polished football - the kind of football that has carried the Midshipmen to their fifth-straight bowl game.

The tone of the game was set early when Army received the ball first and had a methodical drive in which the Black Knights mixed the pass and the run, but failed to score after getting inside the red zone. Army even showed some big-game moxie with a gutsy fourth and 1 call on the Navy 11.

It appeared fullback Mike Viti was stopped short, but he lunged on his second effort and barely managed to get the first. But Army&#39;s drive stalled at the Navy 10. They had to settle for a 28-yard field goal atempt - not the worst outcome.

But senior kicker Owen Tolson missed it. It started a chain of unfortunate events for Army, as the Black Knights&#39; shot themselves in the foot with poor throws, suspect calls, a missed field goal, two fumbles and a blocked punt.

Navy tied its season high with three punts in the first half and was outgained by Army 134 to 125, but was still able to take a commanding 24-3 lead. Senior slotback and kick and punt returner Reggie Campbell was a big reason why Navy had a big first half and game.

Army pulled the game to 7-3 midway through the second quarter, but Campbell quickly erased any Black Knight jubilation with a 98-yard return on the ensuing kickoff. He took the ball straight up the middle into the heart of the Army coverage unit, juked right and left - back and forth - to leave several Black Knights grasping at air and then streaked down the left sideline.

He later had a big punt return right before the half and almost scored his second touchdown of the game, but he was tripped up as he was reversing field. Luckily for the Midshipmen, he left a second on the clock.

It seemed like an improbable field goal attempt with the whipping wind, but senior Joey Bullen hit a 51-yard field goal that grazed off the cross bar and barely skidded through the goal posts. If it was a half-inch farther back, it wouldn&#39;t have made it, but that was the kind of day Navy had - they got the bounces when they needed them.

Navy Head Coach Paul Johnson seriously considered attempting a Hail Mary instead of the field goal because Bullen only connected on one of sixth pre-game tries from 50-yards or more.

But Bullen was confident that he could make it when it counted.

Bullen, however, was adamant, and Johnson reconsidered.

Besides, Johnson reminded people of the obvious after the game, "38 is more than three."

Campbell had one last memorable moment in his final Army-Navy game. In the fourth quarter he ran around the right side into the corner of the endzone for a 12-yard score; his fifth of the season. Campbell was rewarded for his performance by being asked to conduct the Navy band in the playing of "Blue and Gold."

"Reggie has been a big play guy for us all four years," Johnson said.

It was fellow slotback senior Zerbin Singleton, however, who kicked off the route in style. He took a routine hand off down the right sideline for a 38-yard touchdown run with 46-seconds remaining in the first quarter.

The much-maligned Navy defense made big play after big play. The Midshipmen were statistically one of the worst defenses in the nation, ranking No. 107 in total defense by surrendering 458.3 yards a game and No. 117 in scoring defense by allowing defenses to score an average of 39.6 points per game.

That was then and this is now: Navy had seven tackles for a loss, five pass break ups and two forced fumbles.

"I told Reggie [Campbell], &#39;being the captains we got to step up and finish it off strong,&#39;" said senior linebacker Irv Spencer, who had a fumble recovery, five tackles and a tackle for a loss.

Army will have a lot to think about in the off season. First-year Head Coach Stan Brock has already said his team will have an off-season retreat to look at his offense, which was offensive at times this year. Brock has insinuated that the Black Knights will look hard at bringing back the option to the academy.

Navy also has a lot to think about as they prepare for another trip to the Poinsettia Bowl, and even though they were the bitterest of rivals on this cold, December day, the two schools realize they have a bigger, joint mission.