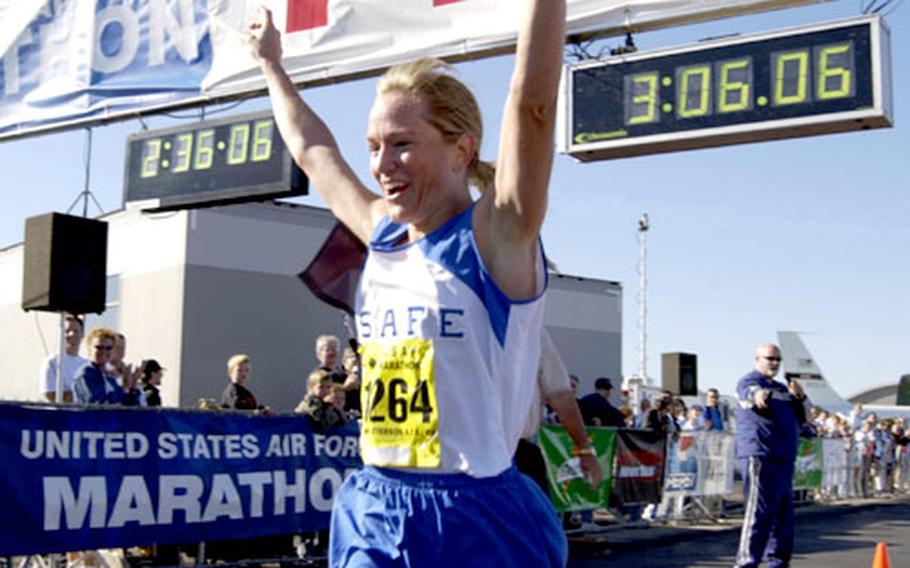 Even by the up-tempo standards of today&#8217;s military, the six-week break between the two races is the marathon equivalent of back-to-back missions.

&#8220;It wasn&#8217;t planned that way in advance,&#8221; Metzger, 31, said of her marathon-a-month schedule. &#8220;In August, a message came down from Air Force headquarters requesting people to represent the Air Force in the Marine Corps Marathon. Since I had won the Air Force Marathon the year before, I was kind of name-embedded in the request.&#8221;

Metzger, who has run in 16 marathons, knew that running in both races would be tough. Her training has been limited by her 12-hour days as executive officer for the operations section of U.S. Air Forces in Europe war-fighting sub-component.

In the end, however, her Air Force pride and her competitive juices tipped the balance.

And compete in a big-time event.

Although Metzger, who said she&#8217;s never had any formal marathon coaching, is quick to stress that she&#8217;s an amateur and not a professional, she&#8217;s hoping the strong field will help her reach a goal she&#8217;s set for Saturday.

Can she better that time just six weeks later?

Metzger is philosophical about the limited training regimen.

In Sept. 2002, Metzger ran the Air Force Marathon, then turned around the following weekend to run the Berlin Marathon with her friend, Capt. Angela Johnson, she said.

Metzger, who will start Saturday&#8217;s race with less emotional turmoil than in Berlin, said she hopes her Air Force victory will serve as a slingshot for Saturday.

To Metzger, a former college soccer player at East Carolina University who didn&#8217;t begin running seriously until commissioned in the Air Force eight years ago, competition is the staff of life.

Metzger downplayed her chances, however, of tasting victory for a fifth time in her career this Saturday.