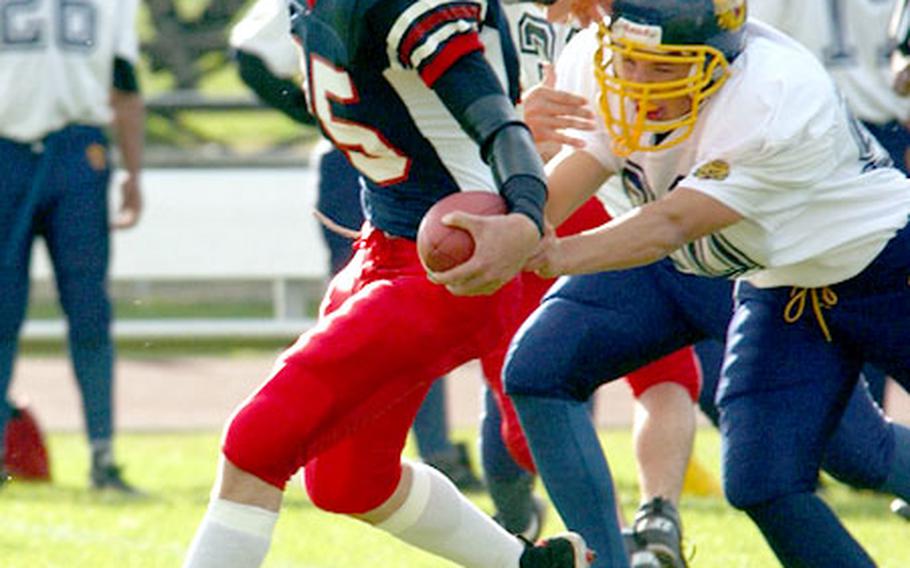 Menwith Hill QB Matt Bailey, a freshman, was 5-for-7 with a TD pass in a 50-8 victory over Alconbury last week. He also intercepted two passes. (Photo courtesy of Jeremy Lock)

Menwith Hill QB Matt Bailey, a freshman, was 5-for-7 with a TD pass in a 50-8 victory over Alconbury last week. He also intercepted two passes. (Photo courtesy of Jeremy Lock)

Matt, 14, made his varsity debut Sept. 18 by playing quarterback and wingback in a 38-14 victory over the Heidelberg junior varsity. All he did was rush three times for 106 yards and a touchdown and complete four of six passes, one for a touchdown.

Last Saturday, during a 50-8 victory at Alconbury, he was 5-for-7 with a touchdown pass (to brother Mike) and a rushing touchdown. He also intercepted two passes from his free safety position.

He followed that with 11 rushes for 160 yards against Alconbury. He also scored five touchdowns: two rushing, one receiving, one punt return and one interception return.

Just two games into the season, the team is on its way toward making the playoffs for the first time in school history.

Not that there&#8217;s much reason to. Thanks to a sizable and experienced line, which averages 220 pounds, and another gifted freshman in the backfield, 200-pound Le&#8217;Shawn Adams, Menwith Hill has shown it is a team to reckoned with despite a high school enrollment of fewer than 100.

Menwith Hill coach Pete Resnick, who has battled slim numbers since he launched the school&#8217;s first team in the mid-&#8217;90s, said he knew this year was going to be special.

The early season success has the Baileys thinking of bigger and better things.

Mike has his sights set on a more immediate goal, a homecoming game against Rota on Oct. 9 on the Mustangs&#8217; home field.

A victory against the Admirals would send Menwith Hill into the playoffs as the III-A conference champions.