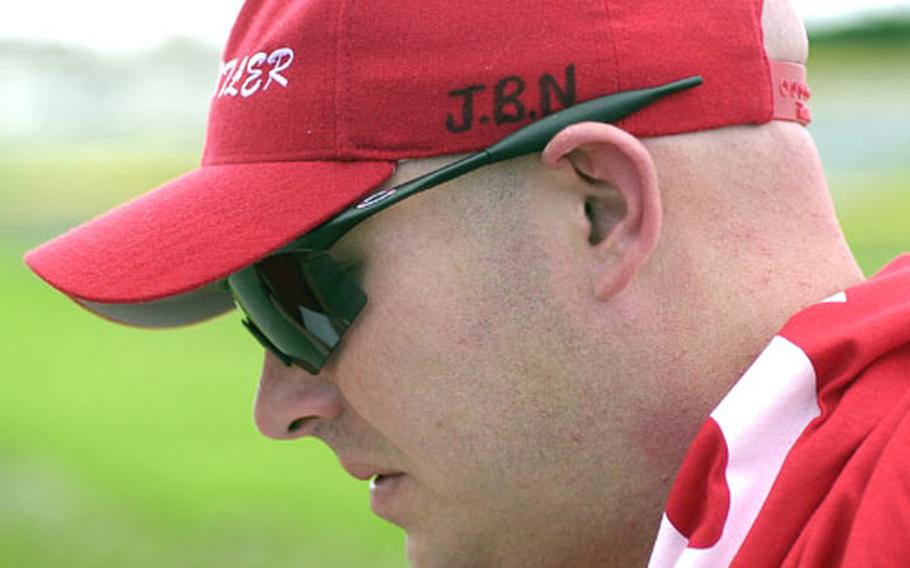 Coach Kip Hogan of Marine Corps Base Camp Butler wears a cap bearing the initials JBN on the side. Those are for Jamie Newberry, who coached the team the past couple of years and who died July 25. (Dave Ornauer / S&S)

Monday&#8217;s 10-8 tournament-opening loss to Marine Corps Base Hawaii was their first game since head coach Jamie Newberry died on July 25.

&#8220;He taught me to leave everything on the field. His fundamentals of coaching, how to split runners, hit behind the runners, know how to play your opponents, knowing the abilities of your players and pushing them to the limit,&#8221; Hogan said.

Newberry, a retired Marine Corps master gunnery sergeant, coached Camp Butler&#8217;s team for two years. He was 47. The cause of death is being investigated.

His death came as a shock to teammates, opponents and Marine Corps Community Services Semper Fit officials alike, they said.

Newberry coached the team to the Marine Regional championship in 2002 and to third place last year. He also was an assistant on 1st Marine Aircraft Wing&#8217;s title team in 1999.

Joe Sutter, a two-time All-Armed Forces outfielder, asked Newberry to coach the Base team in 2002 after coach Robert Harper had to go to the States on emergency leave.