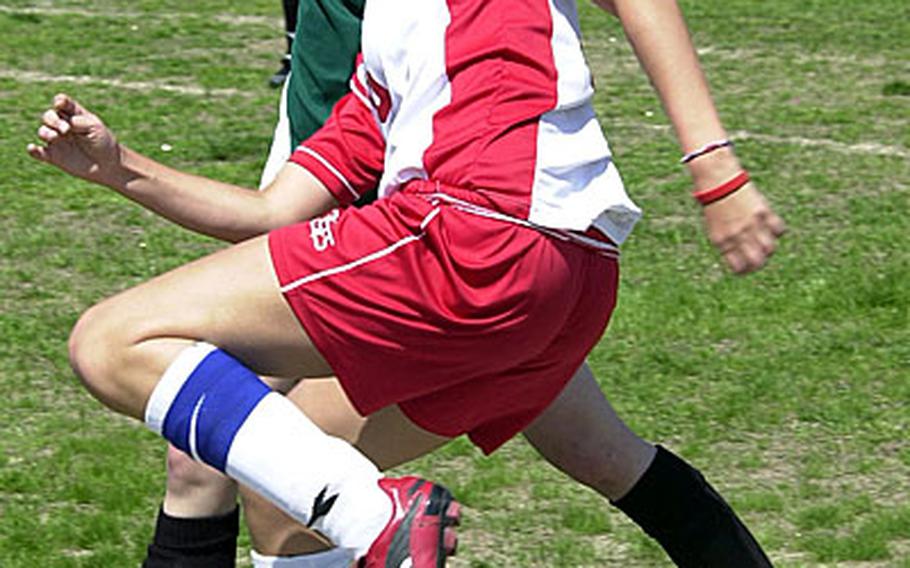 On Friday, the Trojans responded, this time with midfielder Whitney McWherter, injured for the last game March 24 at Camp Zama, in the lineup.

Aubrey Ashliman reached the 30-goal mark with two goals and Saki Johnson also scored twice as Zama downed the Samurai 4-2. McWherter, like Ashliman a newcomer and freshman, only had one assist. But her presence in the lineup meant a &#8220;night-and-day&#8221; difference, Zama coach Vanessa Little said.

Kobayashi scored on a penalty kick and a corner kick, giving him 15 goals for the season, and the Knights held the Panthers to a season-low output in a 4-1 victory at Yokota&#8217;s Bonk Field.

&#8220;They played with a lot of intensity. They finished well. They&#8217;re good,&#8221; Yokota coach Tim Pujol said, adding that the 2005 Far East Class AA tournament champion Knights appear to be a title threat once more.

And what a welcome she got.

Her Falcons needed a penalty-kick shootout to survive Taejon Christian International 4-3 to reach the finals of the Korean-American Interscholastic Activities Conference Division I tournament.

&#8220;I was worried,&#8221; Cannon said of the showdown. TCIS beat Seoul 3-0 in March, then the Falcons blanked the Dragons 4-0 earlier this month in their two regular-season meetings.

The Dragons surged to a 3-1 lead before the Falcons rallied for late regulation goals by Erica Anglade and Angye Law. For the shootout, Cannon inserted midfielder Anglade into the goal, where she&#8217;d played last year&#8217;s KAIAC tournament, and she stopped three of four shots.

Seoul Foreign had to survive a scare of its own. Unbeaten since the 2005 KAIAC tournament final, the Crusaders scored a season-low one goal, but escaped Taegu American 1-0.

&#8220;We had shots at it in the last five minutes. Very frustrating that none went in,&#8221; Warriors coach Ed Thompson said.

Kubasaki girls halt Kadena&#8217;s 45-match winning streakWhile Kadena&#8217;s boys celebrated victory, Kubasaki&#8217;s girls did something that no team has done to Kadena since the 2005 season &#8212; keep the Panthers from winning.

Goalkeeper Alix Mackey and the Dragons held Pacific season goal-scoring record-holder Jen Abel (70 last season, 41 this season) scoreless for the first time this year and Kubasaki and Kadena played to a scoreless draw.