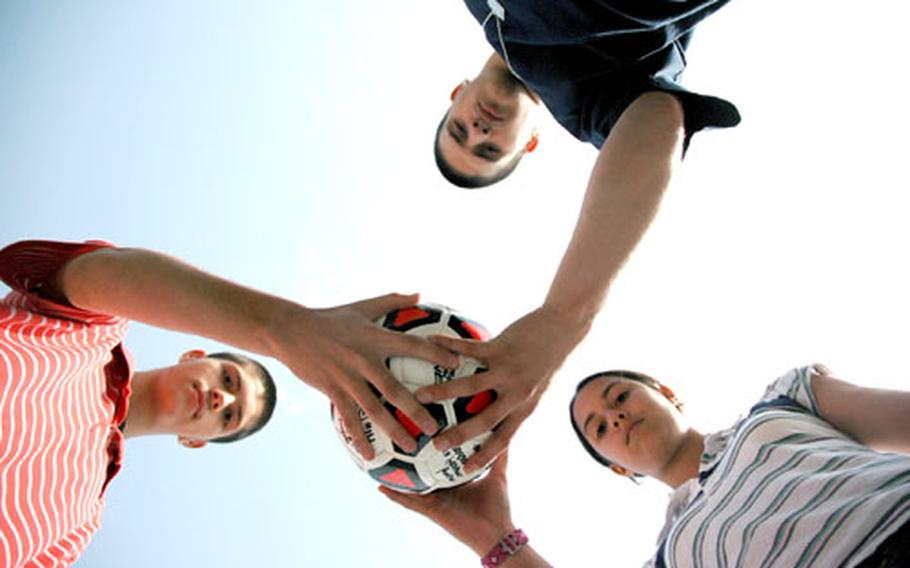 After three years of wandering in near-winless wilderness, signs of life are sprouting in the Matthew C. Perry boys and girls soccer programs.

The DODDS-Japan season was less than a month old when the Samurai boys (2-7-2) equalled the team&#8217;s victory and tie total of last season, while the girls (3-2-1) got off to their best start since 2001 and exceeded their win total of the previous three seasons. Both teams are aiming for more, as Perry hosts the Far East Class A tournaments next month.

An infusion of talented freshmen and transfers and a solid group of returnees has helped. But it&#8217;s mind-set that has led to Perry&#8217;s turnaround, players and coaches said.

Proof of that came on March 24, a frigid Saturday at Camp Zama, when the Samurai girls fell behind 1-0, then 2-1, but rallied for a 3-2 victory, their first over the Trojans since 2001.

From 2004 to last season, the boys enjoyed a brief stretch of success, beating all four DODDS-Japan Class AA schools before fading to a fifth-place finish in the 2005 Class A tournament. The Samurai went 8-34-1 during that three-season stretch.

The girls endured a far more terrible run &#8212; one victory and one tie in 38 matches, scoring only seven times in that span.

Along came a gaggle of youngsters, sweeper Sharnice Alexander, striker Taylor Dunphy and goalkeeper Kate Cutshall, nicknamed the &#8220;Berlin Wall&#8221; in salute to her German roots, from the eighth-grade ranks.

Then there&#8217;s Heather Hyson, a transfer from Okinawa who matriculated in the island&#8217;s U-14 Diplomats developmental program. She has six goals and four assists at center-midfield.

The girls were tired of hearing that they weren&#8217;t any good, Dunphy said.

Perhaps the biggest difference has been the addition of Hyson, Anderson said.

Hyson&#8217;s coach for the past three years with the Diplomats, Michael Callahan, knew the Samurai were getting a good player.

&#8220;She&#8217;s aggressive, very determined to win those 50-50 balls and is pretty good at finishing in front of the net,&#8221; said Callahan, an Amelia Earhart Intermediate School educator on Kadena Air Base. &#8220;She came to us in the sixth grade, and even at that age, you could see she was a soccer enthusiast, really energetic, athletic, ready to learn the game.&#8221;

Most of the boys&#8217; talent revolves around returnees such as Richard Naseer and junior striker Julio Rodriguez, who has a team-leading six goals. Freshman Ricardo Rodriguez compliments his older brother at midfield.

Just how far can the Samurai carry their rejuvenation?