Marymount's Mingazzini got a taste of title and wants more 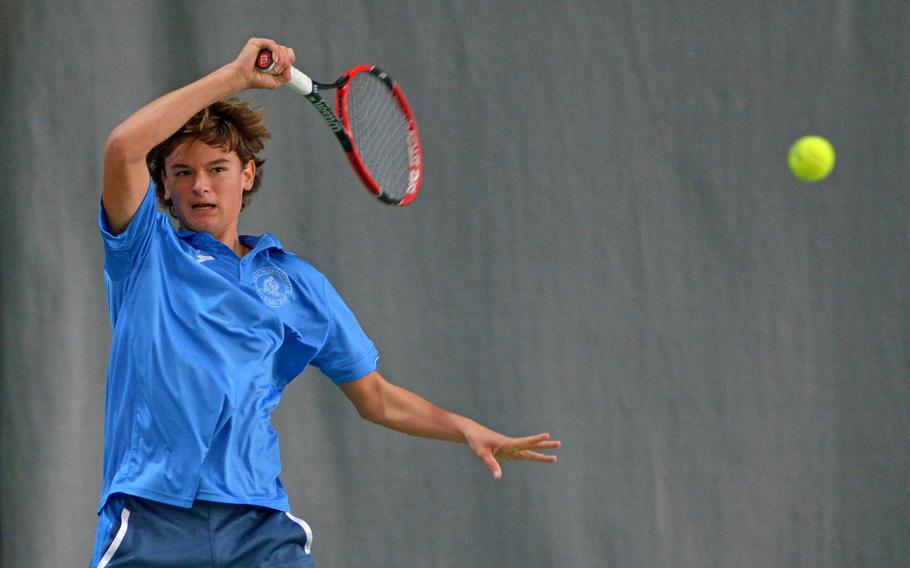 Marymount's Mathias Mingazzini returns a shot from Florence's Francesco Londono in the boys final at the DODEA-Europe tennis championships in Wiesbaden, Germany, Saturday Oct. 29, 2016. Mingazzini won 6-1, 6-4. He has been selected as the Stars and Stripes boys tennis athlete of the year in Europe. (Michael Abrams/Stars and Stripes)

You should see what happens to his enemies.

Mingazzini swept Londono 6-1, 6-4 to complete an undefeated run through the European tournament bracket. Now that performance has made him the 2016 Stars and Stripes boys tennis Athlete of the Year.

Though ranked as a No. 1 seed in the 10-player bracket, Mingazzini’s coronation was far from assured. Higher-profile opponents lurked in the dangerous field.

Felix Selvik of International School of Brussels was part of the team that had bested Mingazzini’s duo for the 2015 doubles title, and was a reasonable bet to replace his brother Fabian Selvik as European singles champion.

Senior Ting Lin, the 2015 European runner-up and Mingazzini’s local rival from crosstown American Overseas School of Rome, was back to attempt the leap from second place to champion.

And Londono, another familiar rival from Italy, awaited in Mingazzini’s pool prepped to launch an upset bid.

But as the tournament went on, it was clear that none were a match for Mingazzini. The Marymount ace dispatched Selvik in the semifinals 6-0, 6-1, then handled Londono in the finals after Londono ousted Lin.

After his triumph, Mingazzini finally took time to evaluate what he’d accomplished.

Then he took a moment to look ahead, and issued a statement that should inspire the rest of DODEA-Europe to spend a lot of offseason time on the practice courts.

“I look forward to coming back next year,” he said.