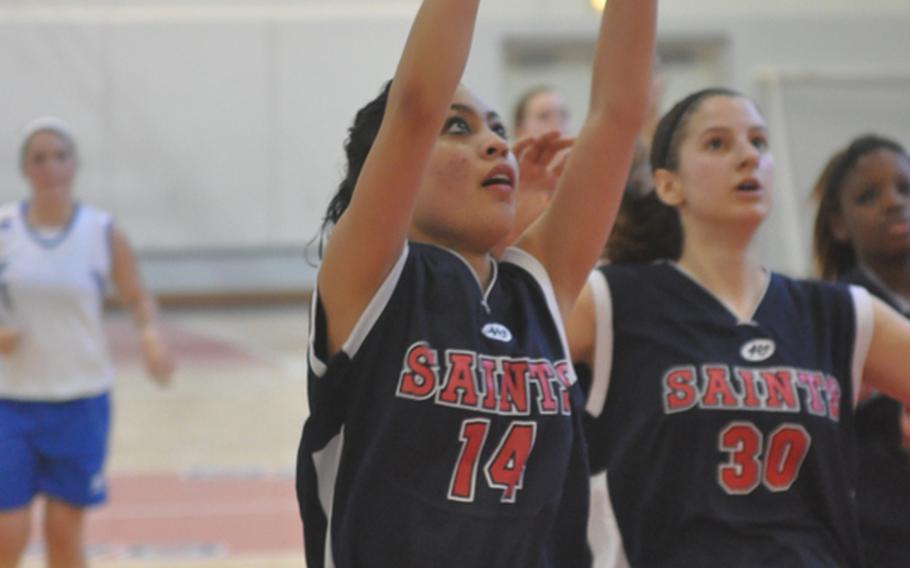 Aviano's Chiara Bustillo puts up a shot Saturday in her team's 51-9 victory over Marymount International, while teammate Katlyn Atchley looks for a potential rebound. (Kent Harris/Stars and Stripes)

Upset by Vicenza&rsquo; 45-41 on Friday night for their first loss of the season, the visiting American Overseas School of Rome Lady Falcons were in no mood Saturday to take any prisoners.

Martina Mannozzi scored a DODDS-Europe season-high 36 points,and her teammate Brittany Roberts poured in 20 as AOSR (3-1 overall and in Region IV) responded to Friday&rsquo;s loss with a 61-34 thumping of their hosts.

AOSR took a 29-13 lead at halftime and put the game far out of reach with a 24-13 fourth-quarter run. Along the way, the Lady Falcons held Vicenza&rsquo;s Lali Baratashvilli, who led her team with 22 points Friday, to just seven on Saturday.

AOSR will not play again until Jan. 14-15 at unbeaten Aviano. Vicenza (2-2) is scheduled to host Sigonella on the same dates.

In other girls games of note on a weather-plagued weekend:

Aviano 51, Marymount International School of Rome 9: Saturday at Aviano, the Lady Saints finished the 2010 portion of their schedule 2-0 with a second straight courtesy-rule victory over the Lady Royals.

Katlyn Atchley led the scoring parade with 14 points for Aviano, which got 13 from All-European Jasmine Mailoto.

Marymount fell to 0-4 overall and in regional play.

Wiesbaden 43, Baumholder 3: Saturday at Wiesbaden, the visiting Lady Bucs can be forgiven if they wished the bad weather that wiped out Friday night&rsquo;s scheduled Region II match-up against the reigning European Division I champions had stayed around.

In addition to Poitier&rsquo;s clutch charity shot, the Brussels defense played a large part in Saturday&rsquo;s victory, according to Brussels coach Dexter Bohn. The Lady Brigands held Menwith Hill scoreless in the third period and to just six points in the final stanza to go to 3-1 overall and in Region I.

International School of Brussels 32, AFNORTH 19: Saturday at Brussels, 11 points each from Amanda Stewart and Lucy Wollenstein were more than enough for the Division I Lady Raiders to turn back D-II AFNORTH in a Region I game.