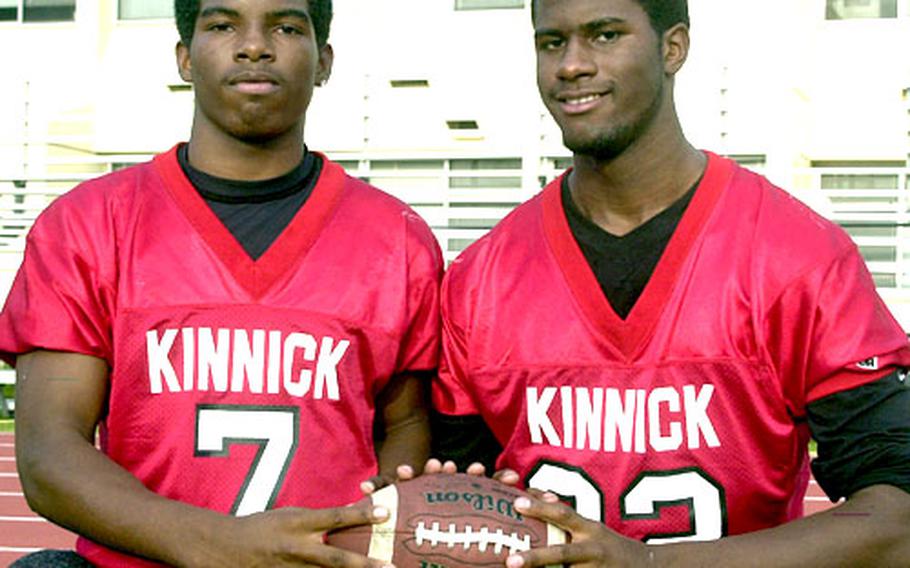 CAMP FOSTER, Okinawa &#8212; Three speedsters in red singlets led the pack as it turned the corner and sprinted for home in the 200-meter dash Mike Petty Memorial track meet.

&#8220;They&#8221; are the Lynce brothers, who since their arrival at Yokosuka Naval Base in Japan 15 months ago from Indian River High in Chesapeake, Va., have provided a much-needed spark for Kinnick&#8217;s boys basketball, track and football teams.

&#8220;I feel like we&#8217;re the power this year,&#8221; said Brenden, unbeaten in seven individual Kanto Plain events and, counting the Petty meet, holder of 10 individual golds so far this season. He has not lost a hurdles race in 10 events dating to last season.

Martinez has seen that impact in two sports, having served as defensive coordinator for a Kinnick football team that enjoyed its first winning season since 1998. The Lynces starred on both sides of the ball as the Red Devils went 7-3, a two-game improvement from 2002 and a five-game jump from 2001.

Leonard&#8217;s star outshined his brother&#8217;s on the gridiron, as he amassed 1,385 all-purpose yards and 17 touchdowns, at quarterback, tailback, linebacker and returner.

Brenden, at fullback, posted a workmanlike 847 yards and seven touchdowns on 84 attempts and terrorized many an opposing quarterback and running back from the defensive end position.

While the Lynce-pins piled up big numbers, they made it clear that it was a team effort.

On the hardwood, the Lynces joined a cadre of solid returnees, including Ekmark, a sophomore guard, and senior three-point specialist Kevin Logan, in sparking a basketball renaissance at Kinnick.

Martinez is hoping such improvements will translate into Kanto Plain track league results.

For years, the Red Devils have been relegated to finishing well behind St. Mary&#8217;s and American School In Japan, but he&#8217;s hoping that will change this year. They&#8217;ve already beaten ASIJ and Yokota, two teams that topped Kinnick a season ago.

Dare the Red Devils dream that they&#8217;ll overcome that St. Mary&#8217;s-ASIJ hurdle on the league&#8217;s biggest stage, the May 8 Kanto Plain finals at Oi Pier Ground near Haneda Airport?

Though Brenden will graduate in June, another Lynce will soon be along to carry on the family tradition &#8212; Tomika, who plays basketball and will be a freshman next year. And the brothers say she may be the best player in the family.