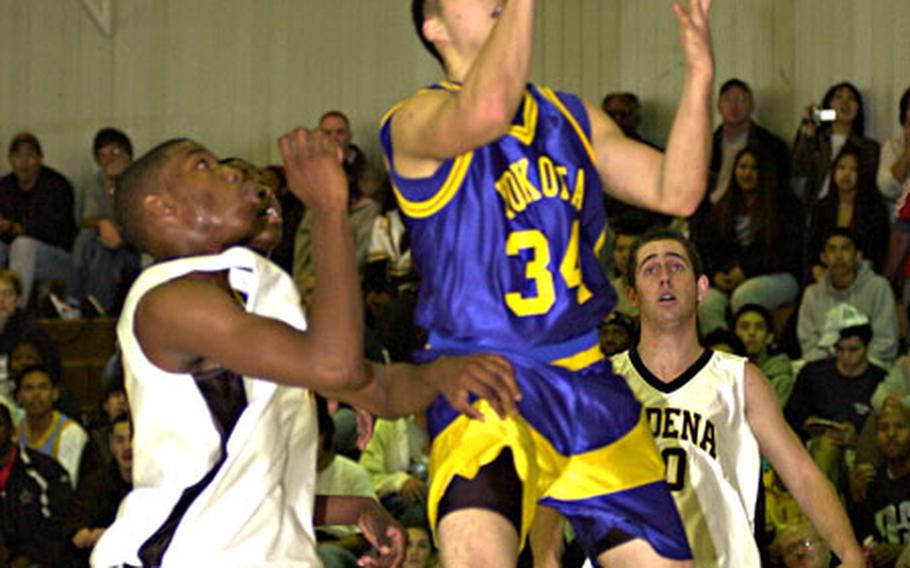 Love&#8217;s basket with 45 seconds left gave Kadena the lead for good and boosted the Panthers to a 66-62 victory in Saturday&#8217;s championship game of the Far East High School Boys Class AA Basketball Tournament before a packed house of more than 1,000 at the Panther Pit.

Excitement overflowed the last two days of the tournament for Kadena, which won its eighth Class AA crown by capping a run of nerve-wracking finishes. Gary Wright&#8217;s putback with 1.6 seconds left pushed Kadena past island-rival Kubasaki 85-83 in the semifinals on Friday.

His team had trouble finishing games at the start of the season, Bliss said.

The semifinal and championship victories &#8220;were the nice finishes we were looking for,&#8221; Bliss said.

Neither side led by more than six points in a close battle from start to finish. Senior guard Shawn Novak hit four of his five three-pointers in a first quarter that Yokota, with just seven players dressed, led 21-15.

Bliss said &#8220;perseverance and composure&#8221; helped Kadena get back into the contest and offset the 21 points scored by 6-foot-3 junior center and tournament MVP Z&#8217;aire Jackson, who ran into foul trouble.

&#8220;Novak got hot in the first half. Thomas is the best big man Z has played this season, an intelligent player. And we struggled offensively,&#8221; Bliss said. &#8220;Yokota played a magnificent tournament through adversity. They&#8217;re well coached and they play good team defense.&#8221;

It stayed nip and tuck, with the teams tied 50-50 after three quarters. Yokota led 62-61 with a minute left, when Kadena began one last push, sparked by Love&#8217;s game-winning three-pointer.

Despite the disappointment of the title game loss, Ettl said he was pleased with the effort his players gave during the regular Japan campaign.