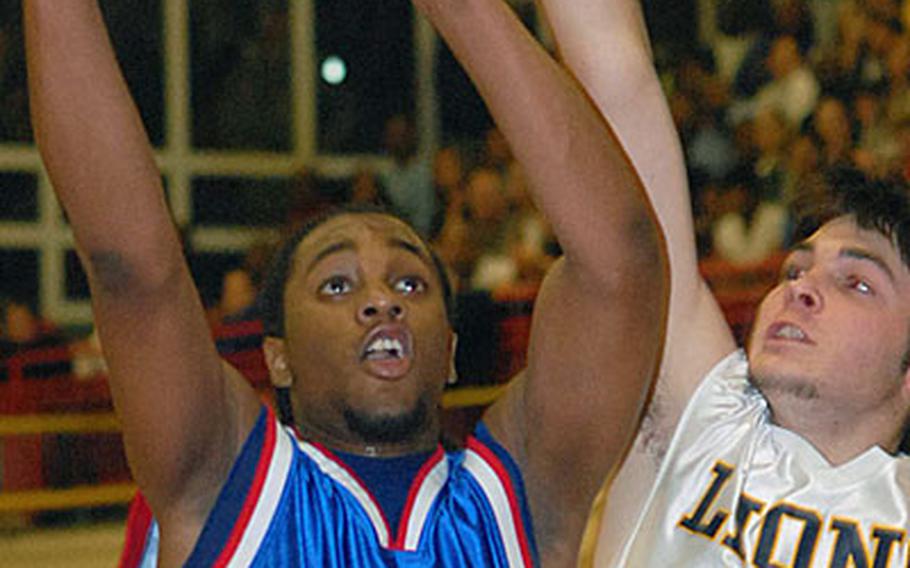 Ramstein&#39;s John Myrick, left, goes to the hoop against Heidelberg&#39;s Ryan Brlecic in the Division I title came at the DODDS-Europe finals in Mannheim, Germany, Friday night. (Michael Abrams / S&S)

Ramstein&#39;s John Myrick, left, goes to the hoop against Heidelberg&#39;s Ryan Brlecic in the Division I title came at the DODDS-Europe finals in Mannheim, Germany, Friday night. (Michael Abrams / S&S) 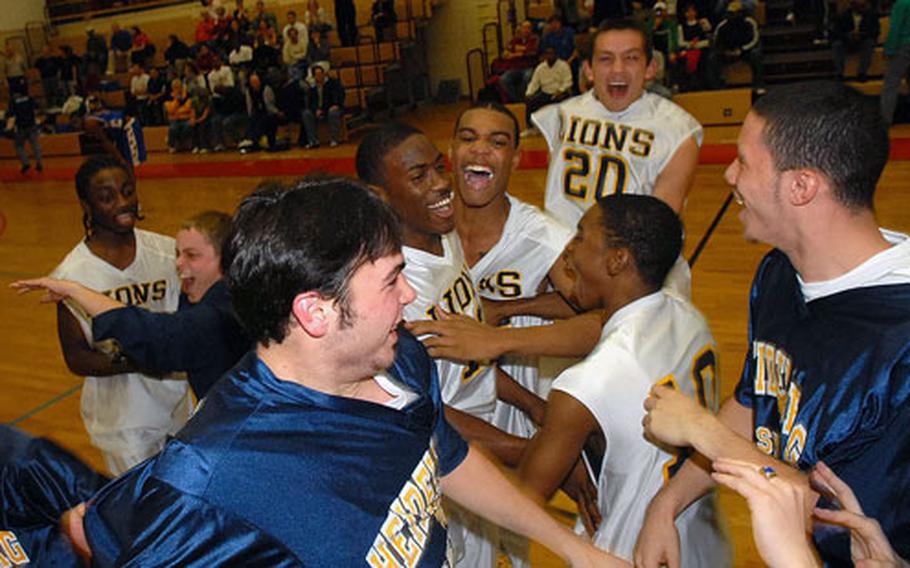 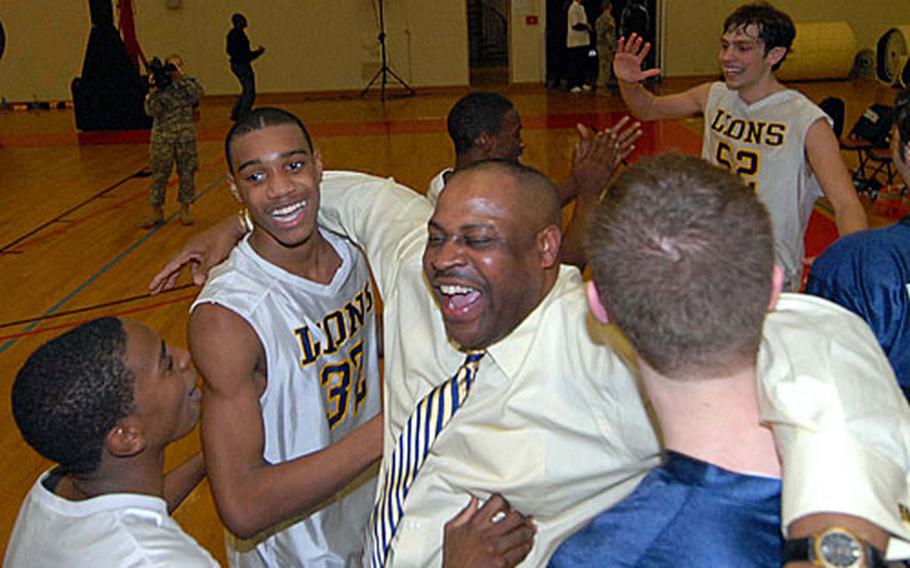 Heidelberg volunteer coach Claude Wesley celebrates with his players. Wesley took over the Lions from suspended coach Brad Shahan and guided them to eight straight season-ending victories and the title. (Michael Abrams / S&S) 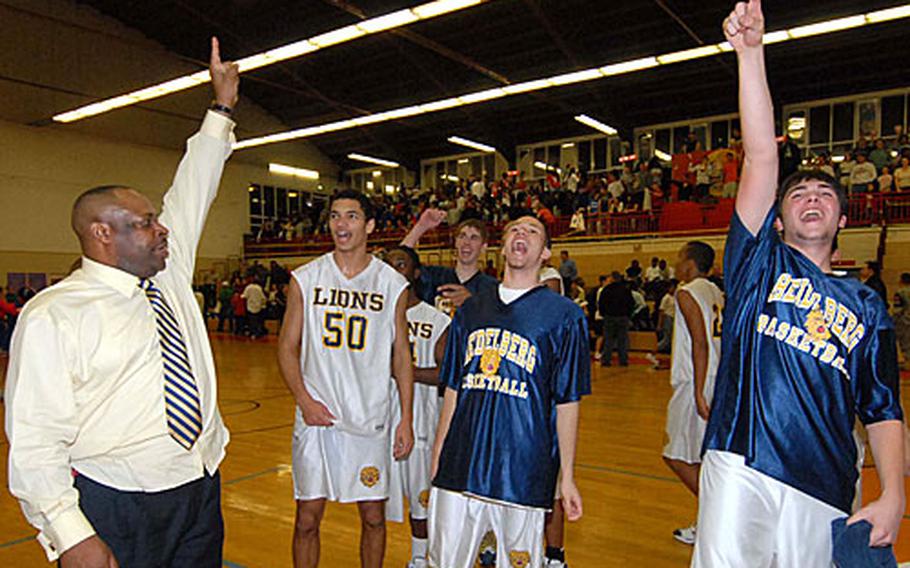 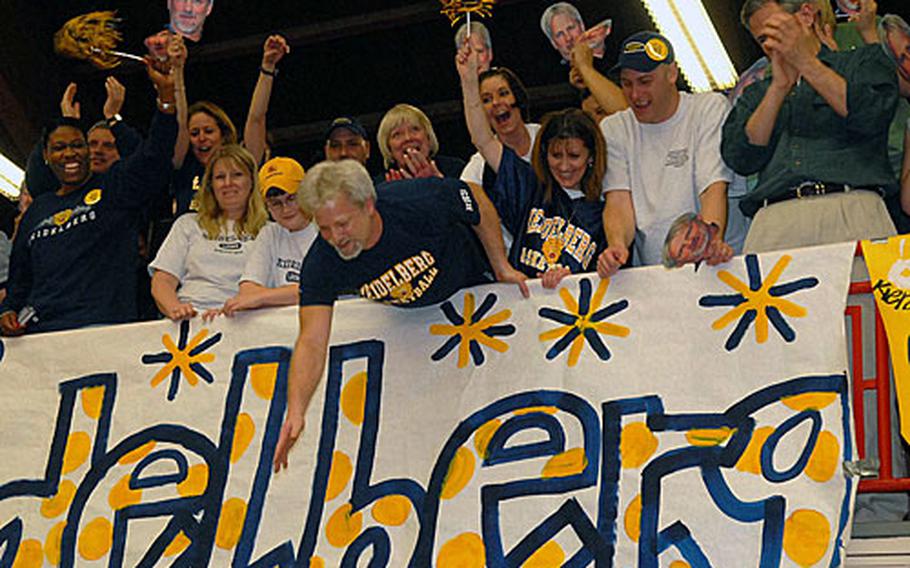 Suspended Heidelberg head coach Brad Shahan congratulates his players from the balcony of the Benjamin Franklin Village Sports Arena, amid cheering fans. Many of the Heidelberg fans waved cutouts of Shahan&#39;s face during the game. (Michael Abrams / S&S)

&#8220;I love these kids,&#8221; said Heidelberg&#8217;s volunteer coach, Claude Wesley, who guided the Lions to eight straight victories after taking over for coach Brad Shahan, who was suspended Feb. 8 for imposing what the school system deemed excessive physical punishment at an August football practice.

Certainly not Frazier&#8217;s 6-for-9 shooting from behind the three-point arc. His 21 points included four straight three-pointers in the second quarter that helped turn a three-point deficit after one quarter into a 24-21 halftime lead.

Nor could Wesley dislike Fisher&#8217;s seven assists, five of them in the second half to help Heidelberg build an eight-point lead with four minutes to go.

And why shouldn&#8217;t he love the effort by Sharer? Heidelberg&#8217;s 6-foot-5 sophomore center battled underneath throughout a game that seemed to adopt Ultimate Fighting Championship rules every time the ball came off the rim. He also scored all four of his points in the final quarter with the game on the line.

&#8220;The refs let us play,&#8221; Sharer said with a smile afterward as chants of &#8220;Sha-han, Sha-han&#8221; from fans waving images of the banned coach reverberated through the Benjamin Franklin Village Sports Arena.

Just as brutal as the contact underneath was Sharer&#8217;s first shot on the one-and-one with Heidelberg up 41-40 with three seconds to play. Much too flat and much too hard, the shot looked off when it left his hand.

Sharer&#8217;s second shot hit nothing but net, and Heidelberg was home free, European champs for the seventh time in Shahan&#8217;s 16 years at the helm and for the sixth time since 2000.

To celebrate, Heidelberg&#8217;s players gathered at the wall underneath Shahan&#8217;s bleacher seat 10 feet above the floor and slapped hands with their coach as he leaned over the railing.