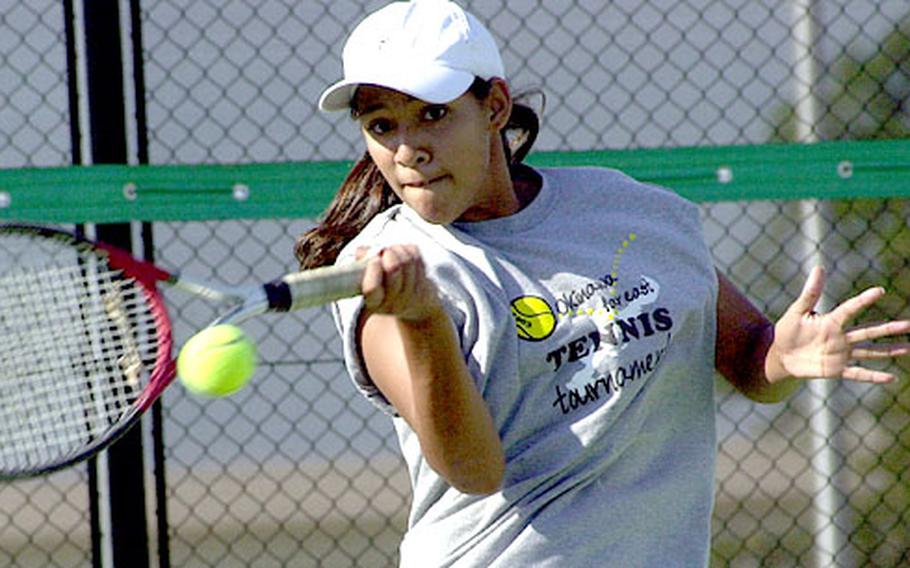 Bit by bit, year by year, the Kadena Panthers have crept toward the top of the Far East high school tennis heap.

Now, as the Far East tournament makes the transition from a biennial to an annual event, Kadena is primed to make a run at school history.

Not since 1989 has a Department of Defense Dependents Schools-Pacific team won a Far East team title. Not since 1995 has a DODDS-Pacific player won a singles gold medal.

They have reason to be both, since the past two Far Easts, in 2001 and 2003, have been exercises in frustration for the Panthers.

They finished fifth in 2001, trailing fourth-place Nile C. Kinnick of Japan by two points and runner-up Seoul American by 10.

Weapons such as Lopes, who bulldozed her way through the main draw until falling in the semifinals to eventual runner-up Amalia Nilsson of ASIJ 6-0, 6-3. In a third-place battle of hard hitters, Lopes succumbed to ASIJ&#8217;s Malika Hayashi 6-1, 6-3.

Kanikkeberg and Lopes could become a formidable team, Nguyen said, as might Soroka and Travis Deng, who like Kanikkeberg will play in his third Far East.

The timing was good for Far East to become an annual tournament, a decision made by DODDS-Pacific&#8217;s Far East Activities Council at its fall meeting in 2003.

Now, Nguyen said, DODDS-Pacific teams can have the luxury of keeping their players year in and year out, instead of watching them play other sports in non-Far East years, as happened in the past.

Still, Nguyen, Lopes and the Panthers still face formidable obstacles. International schools from Tokyo have ruled the roost in Far East tournaments every time but once since their inception in 1978.

Populating those teams are experienced players, many of whom cut their teeth on tennis during middle school years and sometimes stick around until graduation, providing a continuity base. A handful even play tennis year-round, taking lessons from club pros or playing for club teams.

All DODDS&#8217; programs are transient nature; players routinely come and go every two to three years.

&#8220;The international schools have a lot more continuity,&#8221; said Bruce Barker, who coaches Osan American in South Korea. &#8220;Their kids tend to stay from the eighth grade on. ... We have kids who rotate every couple of years. Many are underclassmen who are going to be gone next year, and that kind of hurts &#8230; all the DODDS schools.&#8221;

Also, Kadena&#8217;s only regular-season opponent is Kubasaki, and the Dragons only have a couple of boys players and suited up just one girls player a season ago.

Bloodlines follow this team, with senior Mary and junior James Edwards, seven-year veterans of the game, back to bolster the Panthers&#8217; lineup.