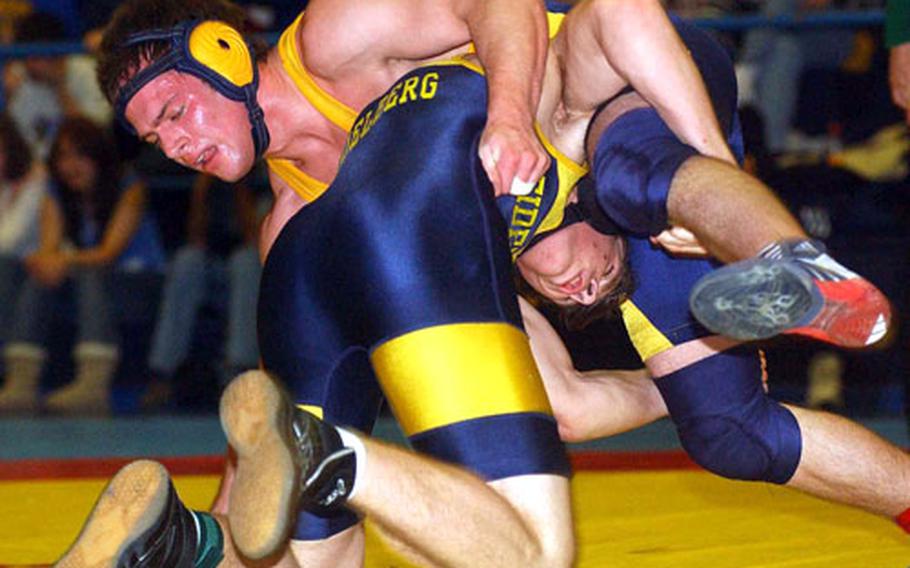 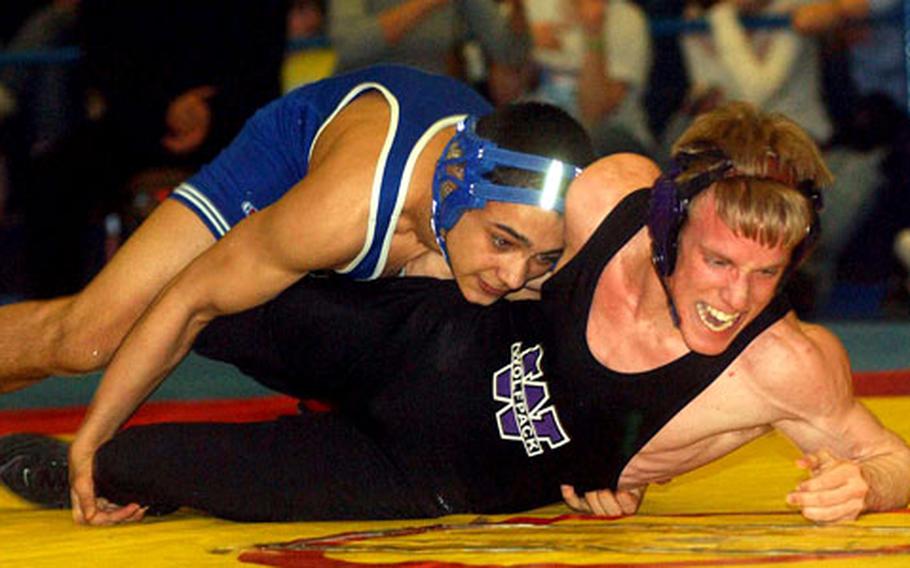 Würzburg&#39;s Jonathan Painter, right, tries to get out of the grasp of London Central&#39;s Jonathan Scott in the 130-pound final. Scott won the match to capture the 2005 DODDS wrestling crown. (Michael Abrams / S&S) 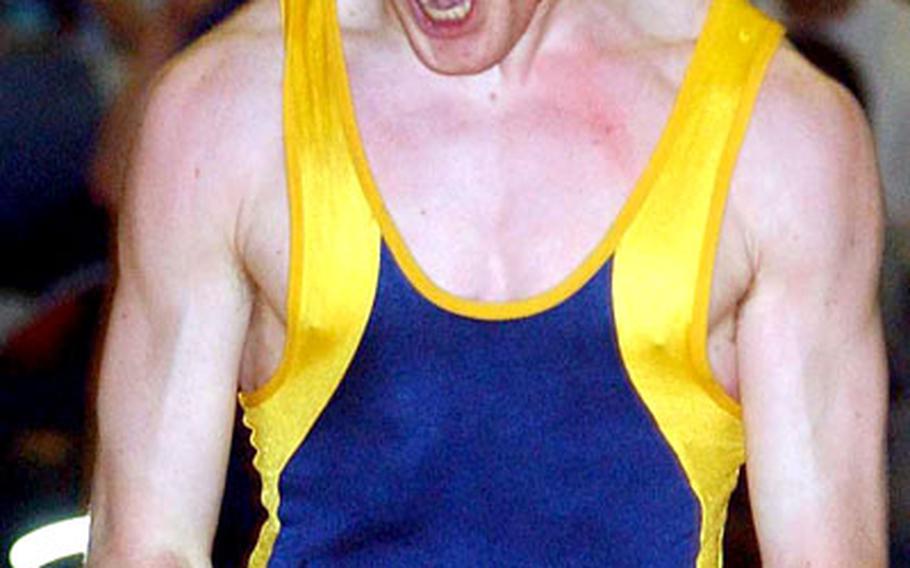 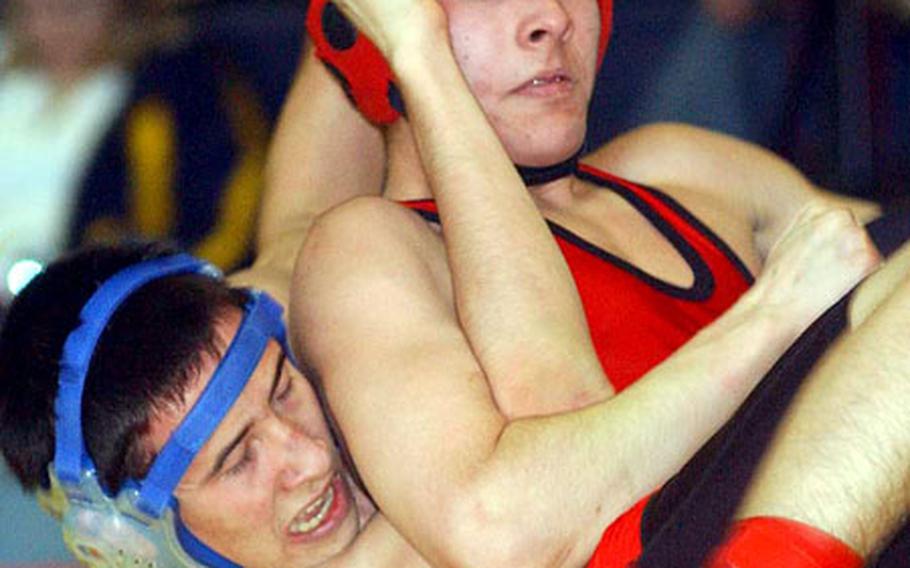 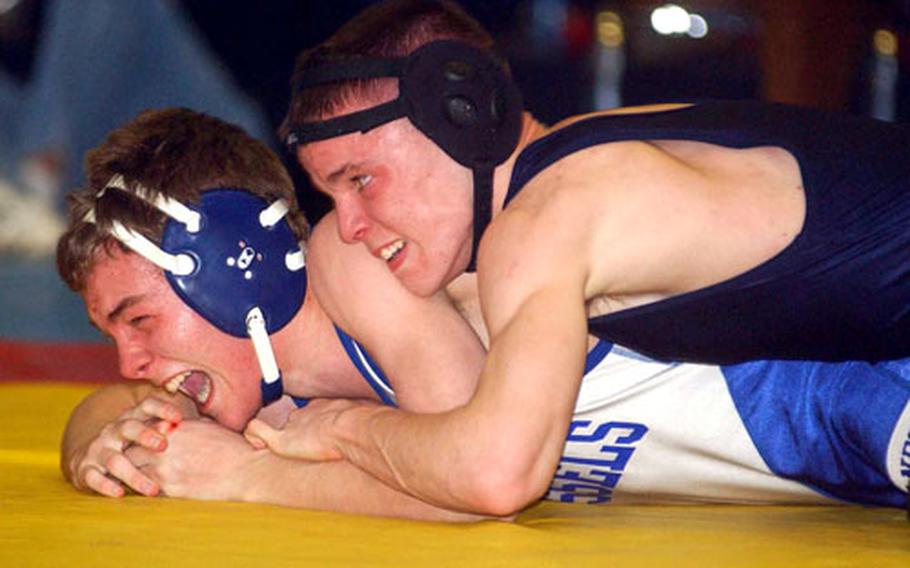 WIESBADEN ARMY AIRFIELD, Germany &#8212; Two of the five returning champions in the DODDS-Europe wrestling championships defied the No. 2 seeds they were given by winning their second straight titles on Saturday.

Scott took a 10-4 lead into the final 2:09 of the title bout before Painter closed with a rush.

Zachar defeated Wiesbaden&#8217;s Matt Alexander, who knocked off Flores in the semifinals, 8-5 by exploiting a trio of double-leg takedowns.

Three other returning champions failed to win titles. Karl Saucier was upset in Friday&#8217;s 145-pound quarterfinals, and Mike Monaco of Naples and Jesse Painter of W&#252;rzburg placed second at 140 and 135, respectively.

Monaco and Gardner were tied going into the final two minutes, but Gardner took a 7-6 lead with 1:45 left in the match when Monaco was penalized for locking his hands. Monaco threw everything he had into trying to turn Gardner over the next 90 seconds, but Gardner held on.

Painter, never short on muscle and desire, could do nothing with the technically proficient Reinhart. The Ramstein freshman, who placed sixth in the Ohio middle school championships last season, would not allow the determined Painter to complete any move.

Ramstein senior Cole Maxey turned a DODDS double when he added the European 215-pound crown to the Far East title he won last season in Japan. Maxey pinned Richard Rendon of SHAPE at the 5:20 mark of a gritty match.

Maxey trailed throughout the bout and was down 7-4 with 1:20 to go when his relentless pursuit of Rendon produced a takedown into a half-nelson body press for the fall.

Reinhart and Maxey were among five first-timers who won championships on Saturday.

Bitburg&#8217;s Daniel Brunal, who finished second at 103 last season, made the top rung in his fourth year of trying when he downed Seth Romero of Menwith Hill 9-6 for the 112-pound crown.

Bryan Isbell of Brussels joined Brunal in turning 2004 silver into 2005 gold with a freestyle-looking 12-8 victory over Heidelberg&#39;s Rex Ely at 171. Isbell, coming off a battle with mononucleosis, used his skill on his feet for the victory, taking Ely down four times and reversing him.

Aviano sophomore Gary Vogt improved on a third-place finish in 2004 with a 5-2 verdict at 119 over Paul Moseman of Brussels. Noah Sheppard of Ramstein, hurt during last year&#8217;s Europeans, manhandled Andrew Moon of Heidelberg 12-0 at 125. Both were top seeds.

James Horst of Ramstein made it 4-for-4 for Royals in the finals with a 4-1 victory over Gregg Surpris of Wiesbaden at 275.

But the home team got its treat at 145, when Tony Gagnon, another second-place finisher in 2004, reversed and pinned Vicenza&#8217;s Gary King 1:32 into their title bout.