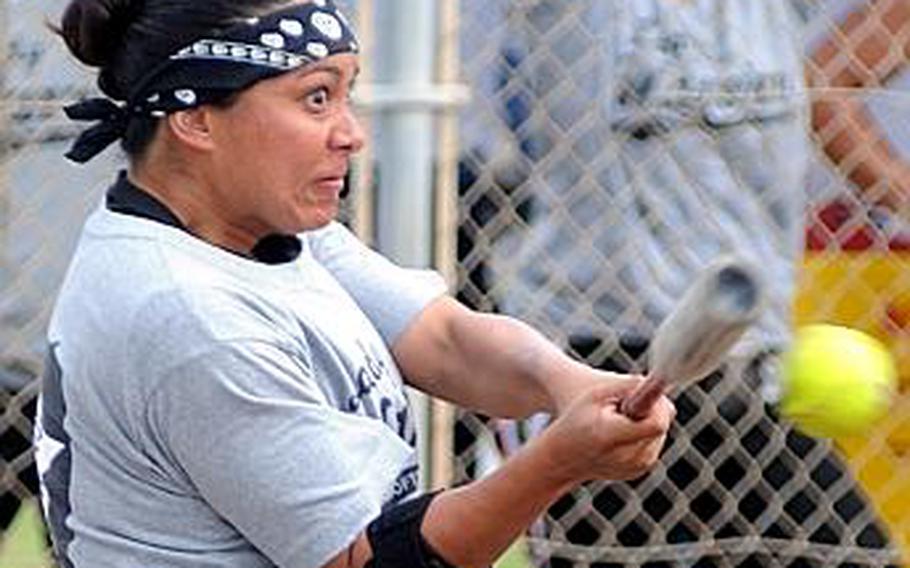 Catano went 2-for-3 with four RBIs to help power Casey past Camp Humphreys 23-3 for its second women&#8217;s title in three years. Meanwhile, Tiner was 3-for-3, also with four RBIs, as Legion repeated its men&#8217;s championship 20-0 over Casey. Each final lasted three innings.

&#8220;Everybody did their jobs when they needed to. Cat, usually she doesn&#8217;t hit it, but today, she was hitting, too,&#8221; said coach David Hill after his Warriors won their third Pacific Grand Slam tournament title and first outside of Korea.

Five-time All-Air Force slugger Chadd Malin went 3-for-3 with a homer and three RBIs, Mike Dochwat was 3-for-3 with two doubles and two RBIs and Dan Miller also drove in two runs for Legion, which sent 17 batters to the plate in a 13-run second inning.

In his swan song for Legion before leaving Okinawa after retiring from the Marines, pitcher Richie Krause held Casey to two hits.

Camp Casey 23, Camp Humphreys 3: The Warriors sent 17 batters to the plate and tallied 14 first-inning runs, then closed it with eight more in the third, taking advantage of 10 walks.

Smith was 3-for-3 with four RBIs, Lisa Harris had two triples and three RBIs, Kristen Wolf was 2-for-4 with three RBIs and Scarlet Pryor and Avonary Williams each drove in two runs.