Lakenheath rallies to win vs. Ramstein 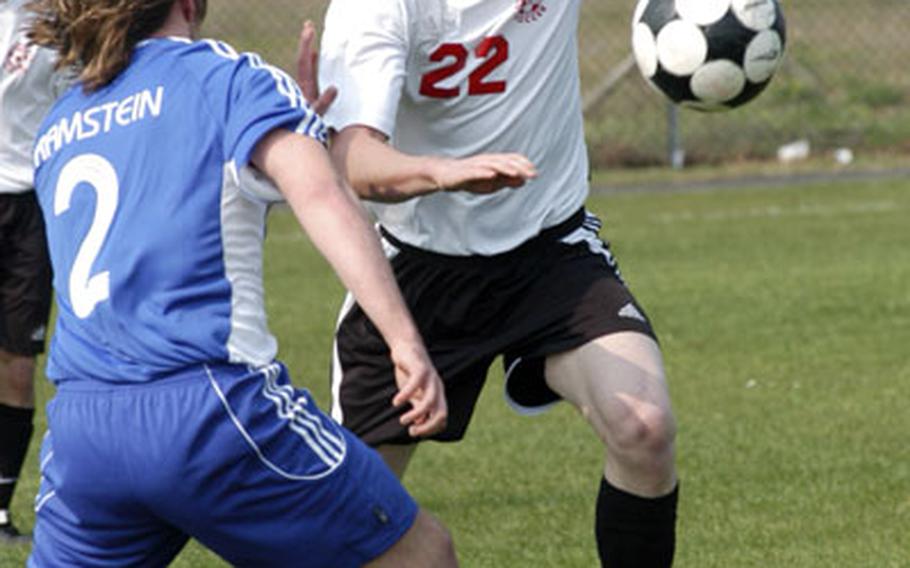 Lakenheath senior Carl Snapp, right, fights past a Ramstein player in Saturday&#39;s 3-2 home win against the Royals. Snapp scored two goals in as many minutes deep in the second half to break a 1-1 deadlock and put the Lancers ahead for good. (Ben Murray / S&S)

Lakenheath senior Carl Snapp, right, fights past a Ramstein player in Saturday&#39;s 3-2 home win against the Royals. Snapp scored two goals in as many minutes deep in the second half to break a 1-1 deadlock and put the Lancers ahead for good. (Ben Murray / S&S) 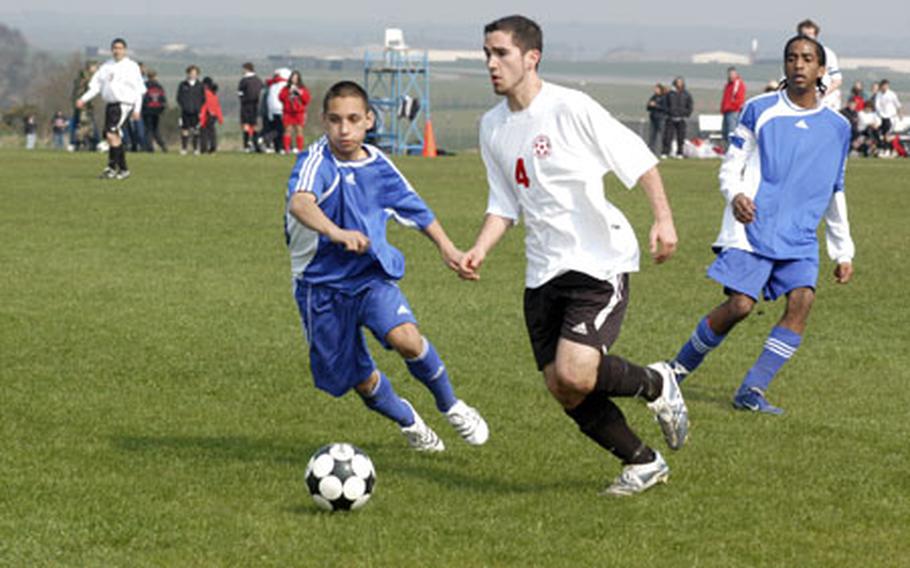 Lakenheath&#39;s Darin Taimanglo, in white, navigates around two players from the Ramstein Royals Saturday in the Lancers&#39; 3-2 victory over the visitors from Germany. (Ben Murray / S&S) 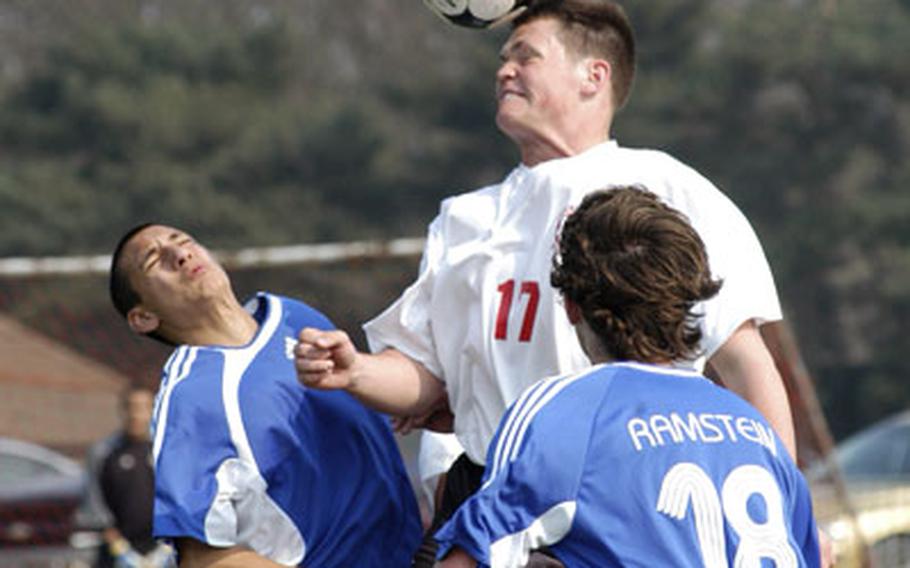 Lakenheath High School senior Wes Kleneic, center, fights off two Ramsten Royals for a header near the end of the Lancers 3-2 win Saturday on their home field. (Ben Murray / S&S)

RAF LAKENHEATH, England &#8212; Lakenheath scored two goals in two minutes Saturday, coming back from a halftime deficit for a 3-2 victory over Ramstein in a Division I boys soccer game.

The Lancers, who trailed 1-0 at halftime, tied the score on a floater by Kai Pope from just outside the penalty box.

Lakenheath won back the English flag the teams use as a traveling trophy in their rivalry. The flag had been in Ramstein&#8217;s hands since the 2005 DODDS-Europe championships.

Lakenheath coach Chris Davis credited a team effort for the victory, which leaves the Lancers (2-0 in Division I) in a tie with Heidelberg atop the D-I standings heading into the spring break. The Royals (1-2, 0-2) play Wiesbaden on Thursday before starting their break.

In other boys games of note Saturday:

Hohenfels 5, Bamberg 2: At Hohenfels, All-Europe forward Anthony Marshall scored three goals and assisted on one as the defending European Division III champion Tigers took the lead in Division III-South with a 3-0 record. Hohenfels is scheduled to host Giessen on Friday before starting the spring break. Bamberg fell to 1-1 in league play.

Vilseck 4, Hanau 1: At Grafenw&#246;hr, Jake Skells scored two goals, and Hanau transfer Juan Agosto added an assist and a solid defensive outing, according to Vilseck coach Billy Ratcliff, as the D-II Falcons turned back their D-III visitors and remained unbeaten. &#8220;He&#8217;s been a godsend for us,&#8221; Ratcliff said of Agosto. He also praised the defensive work of Justin Ingram.

London Central 6, Alconbury 0: At High Wycombe, England, Omar Yuksel scored three goals and All-Europe midfielder John Secules scored once and assisted on two goals as the Bobcats improved to 2-0 in III-North. London Central coach Jeffrey Black praised the defensive play of Samantha Beatty, the only female on his co-ed team.

Mannheim 6, W&#252;rzburg 2: At Mannheim, Jeff Hartke scored four goals and added an assist as the Bison won for the first time in two years, according to volunteer coach Martin Goering.

Goering said Mannheim (1-2 overall and in II-South) took 24 shots in the first half before turning it over to the reserves after intermission. W&#252;rzburg fell to 0-3.

Naples 6, Sigonella 0: At Naples, All-European Chris Campos scored three goals as the Wildcats upped their American Schools in Italy League record to 2-0 going into the break.

Incirlik 3-0, Ankara 2-3: At Incirlik, Turkey, Justin Nalley scored twice to lift the home team on Friday, but Ankara rebounded Saturday to even both teams&#8217; records at 1-1. They play again at Ankara on April 27-28.

Reporter Ben Murray in England contributed to this report.