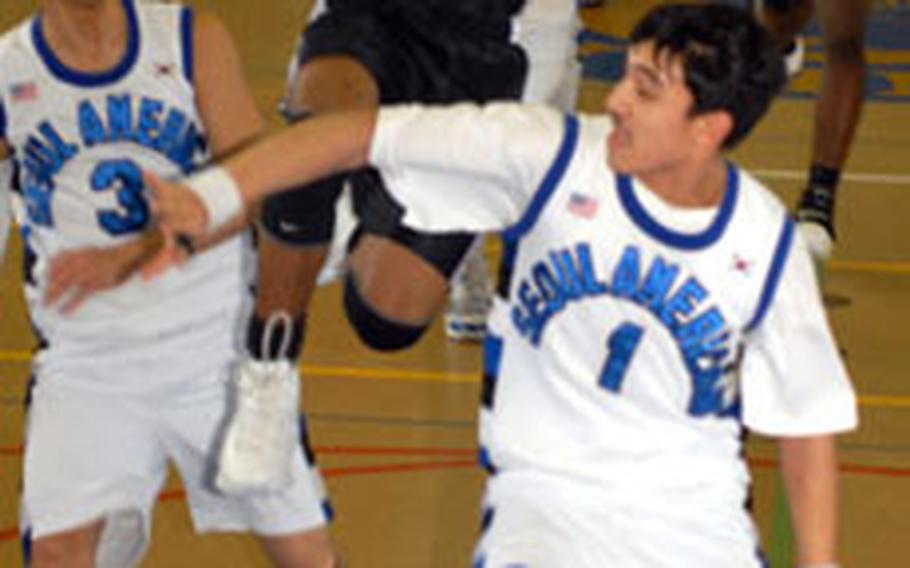 YOKOTA AIR BASE, Japan &#8212; Lightning, in the form of senior guard Chris Cooke, struck for the second straight day for the Kubasaki Dragons.

Cooke made a bank shot with 54 seconds left Saturday, completing a rally from a 15-point third-quarter deficit and lifting the Dragons to a 73-72 victory over Seoul American in the title game of the 2nd New Year&#8217;s Classic Boys Basketball Tournament.

The Dragons rallied from 25 points behind Kinnick on Friday for a 63-62 pool-play victory.

Kubasaki won the title in its third game of the day on Saturday. Seoul American played two, having earned the top seed and a first-round playoff bye. Kubasaki was the No. 3 seed.

Kubasaki (14-7) won its last five games in this tournament after losing two of its first three. Seoul American (23-3) went 6-1 in the tournament.

The early stages of Saturday&#8217;s final portended a see-saw battle until the Falcons pulled away behind junior Joe McLean&#8217;s 16 points in the middle two quarters. His shot in the lane put the Falcons ahead 47-32 with 6:20 left in the third.

As in Friday&#8217;s game against Kinnick, Kubasaki turned the tide thanks to its press and the shooting of James Smiley (22 points), Jacorian Callier (23) and Cooke (16). Kubasaki trailed 57-50 after three quarters.

Cooke&#8217;s shot with 54 seconds left were the game&#8217;s final points. During a scramble off a missed Kubasaki shot, Dragons guard Kardai Porter got a handle on and passed it to Cooke.

Seoul American had two shots to go ahead but missed, then regained possession with 4.9 seconds left on a Kubasaki backcourt violation. But guard Willie Brown was called for an offensive foul with 1 second left and Kubasaki ran out the clock.

Cooke said this may not be the last time the two rivals meet this season.