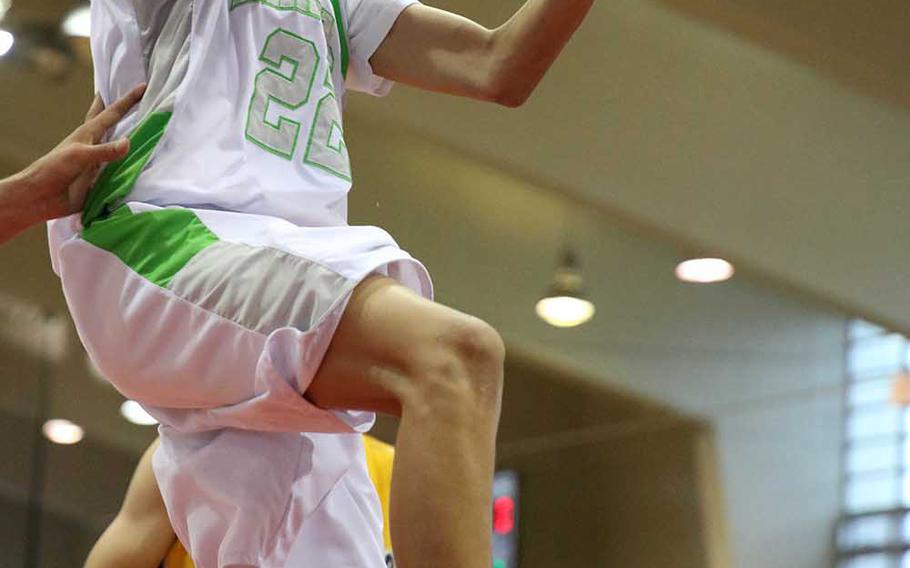 Kubasaki's Elonzo Higginson III puts up a shot past the Kitanakagusuku defense during Sunday's championship game in the 11th Okinawa-American Friendship Basketball Tournament. The Dragons lost to the Fighting Lions 63-50. Higginson leads the Dragons into the 12th edition of the Friendship Tournament this weekend at the same Foster Field House. (Katricia Aquino/Special to Stripes)

The 12th installment of the tournament runs Saturday and Sunday at the Foster Field House. Organizers said this year’s event will be an abbreviated one; just six boys and six girls teams, instead of the customary eight.

To Fick, this year’s Friendship Tournament takes on added meaning.

Basketball season is three weeks shorter this year than in past years because of the Winter Olympic Games’ effect on DODEA-Pacific’s winter season schedule, so every bit of preparation for the Far East tournaments Jan. 29-Feb. 1 is extra important.

“We were all excited about the January schedule,” Fick said; it also includes next weekend’s exchange with Taipei American School, also on Camp Foster. “But if you take a closer look, we only have 12 practices until the end of the season.”

Especially with the Dragons on a 2½-week break for the winter holiday, “we’re trying to get back into the swing of things,” Fick said.

One thing that has not changed about the Friendship Tournament is the level of competition, Fick said. Kadena’s and Kubasaki’s boys and girls teams must very quickly get up to speed playing international rules against some of Okinawa’s Top-rated high school programs.

Naha Kokusai and Kitanakagusuku will bring their boys and girls teams; the rest of the boys field includes Maehara and Oroku, while the girls field features Ginowan and Koza.

On the mats, Yokota hosts an all-DODEA-Japan wrestling tournament, while Humphreys hosts a DODEA-Korea four-way dual-meet event, each happening on Saturday.