Kubasaki, Kadena face off on diamonds 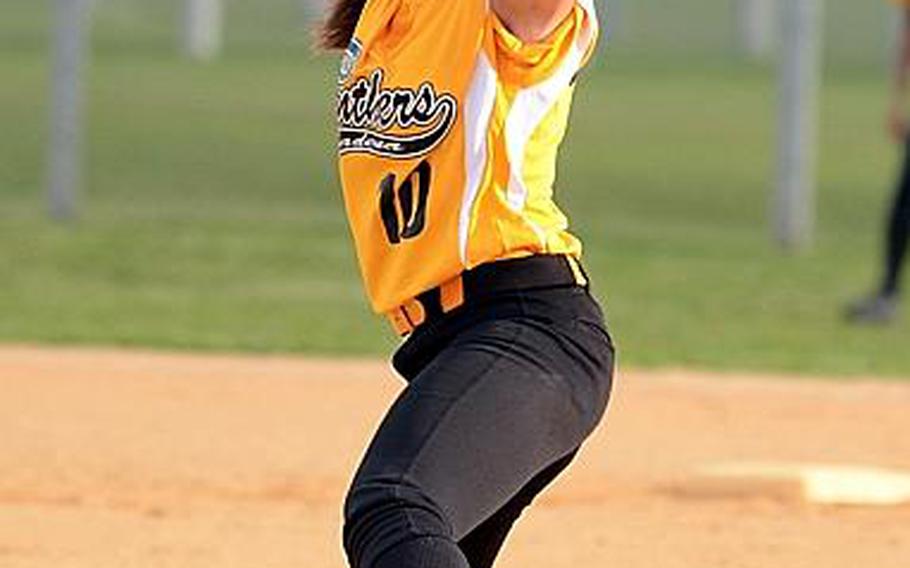 Freshman right-hander Bailey Prince and the Kadena Panthers hope this weekend to recapture the Okinawa best-of-three finals title they lost last year to the Kubasaki Dragons for the first time. (Dave Ornauer/Stars and Stripes)

It’s a point of pride for the Dragons, who played second fiddle behind Kadena for nine years’ running before seizing their first district title last May 12.

But it’s also a not-so-good thing, for the Dragons’ jerseys are now custom-fitted with front and back bull’s-eyes, especially after winning last Saturday’s regular-season finale 9-1 over the Panthers.

“The only thought I have is to have my girls together physically and mentally, and step out on that field with confidence and do what we do every single day,” Davis said. “One pitch at a time, one game at a time, and that’s where their focus needs to be.”

Kadena won the regular-season series 5-2, giving the Panthers home-field advantage for the 11th straight year. The finals begin at 5 p.m. Friday with Game 1 at Foster Field 2, followed at 9 a.m. and noon Saturday, if needed, by Games 2 and 3 Ryukyu Middle School, Kadena’s home field.

Most of the seven games were decided by big margins, Kadena winning by 10-run mercy rule twice and Kubasaki once for the first time in school history.

“When we’ve been beaten … we’ve beaten ourselves,” said Kelli Wilson, the Panthers’ second-year coach who led Kadena to the Far East championship in her first season last May. The Panthers beat Kubasaki in that final.

“Kadena’s a good team. Kadena’s a great team,” Davis said. “But we have to focus on what we do every day, and all they can give is their best.”

On the baseball side, Kubasaki is trying to make it eight straight titles on coach Randy Toor’s eight-season watch.

The Dragons enjoyed a perfect run this season against the Panthers, and hold home advantage. Game 1 is 5 p.m. Friday at Kadena’s Four Diamonds, and Games 2 and 3, if needed, are Saturday at Foster Field 4.

Track and field sees the last warm-up action for Far East with the Kanto Invitational on Saturday at Yokota High School’s Bonk Field, which will also host the Far East meet on May 20-21.

It’s the first time since 2001 that the Kanto Invitational will not field runners from schools outside the Kanto Plain. Kubasaki and Kadena are normally entered, but this year were not given permission to travel on the weekend between Advanced Placement exams weeks.

The Dragons and Panthers instead will run their Far East athletes in the island’s final regular-season meet at 9 a.m. Saturday at Kubasaki.