Krievs excels at Kinnick after transfer on eve of football season 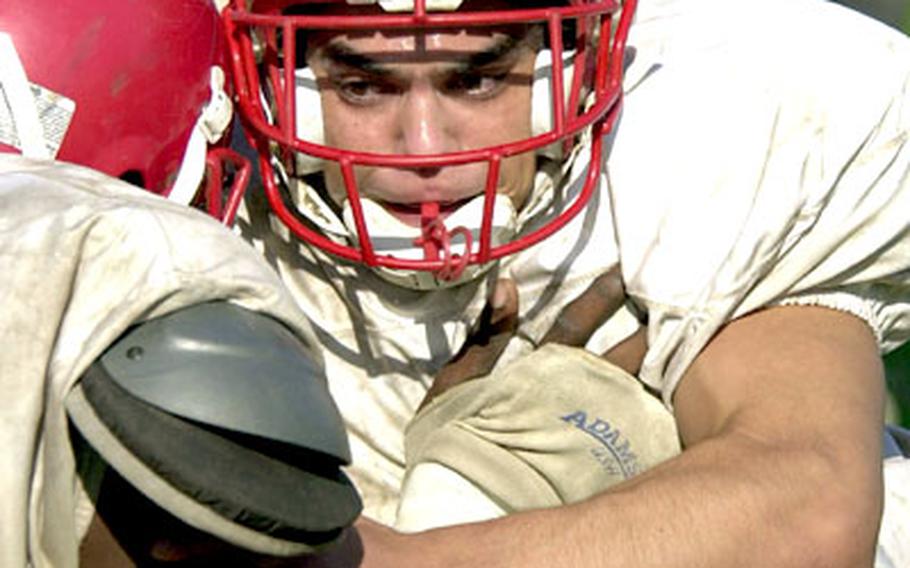 Still, when Perry Principal Alice Berard announced a day after school opened to fold the team for safety reasons, it felt like a hammer blow.

&#8220;We were there trying to pull things together, have enough players out and try to have a successful season,&#8221; said the senior linebacker/fullback.

But in the end, the players numbered 14 &#8212; not enough, said Berard and coach Kevin Crone, to compete safely.

Opportunity knocked, in the form of Krievs&#8217; uncle, retired Marine Tony Camacho, who works at Yokosuka Naval Base &#8212; home of Nile C. Kinnick High, which has a football program.

Arrangements were made quickly; Krievs enrolled at Kinnick and now plays for the Red Devils.

Said offensive coordinator Jimmy Davis, who coached him in the All-Star games: &#8220;The kids definitely respect his play.&#8221;

Krievs will remain at Kinnick until football season ends in November, then transfer back to Perry, where he&#8217;s to graduate in the spring.

Changing schools is more common for Department of Defense Dependents Schools students than for those stateside, DODDS-Pacific officials said, simply because of the military&#8217;s transient nature.

But Krievs made his presence at Yokosuka felt literally from the opening kickoff against Zama, planting a hard tackle on Trojans kick returner Donovan Nance.

During Kinnick&#8217;s 44-0 victory Friday over American School In Japan, Krievs even had some former classmates supporting him. After Perry&#8217;s tennis team finished its match nearby, it went to the Berkey Field stands.

&#8220;It really showed how well liked Adam Krievs is, at his former school and here,&#8221; said David Tran, Kinnick&#8217;s assistant principal, who held the same post at Perry.

At 2-0 this season, the Red Devils next take aim at five-time defending JFL champion Yokota. Krievs said he believes Kinnick has a shot at taking down the Panthers.

And, he said, he believes he was right to move.