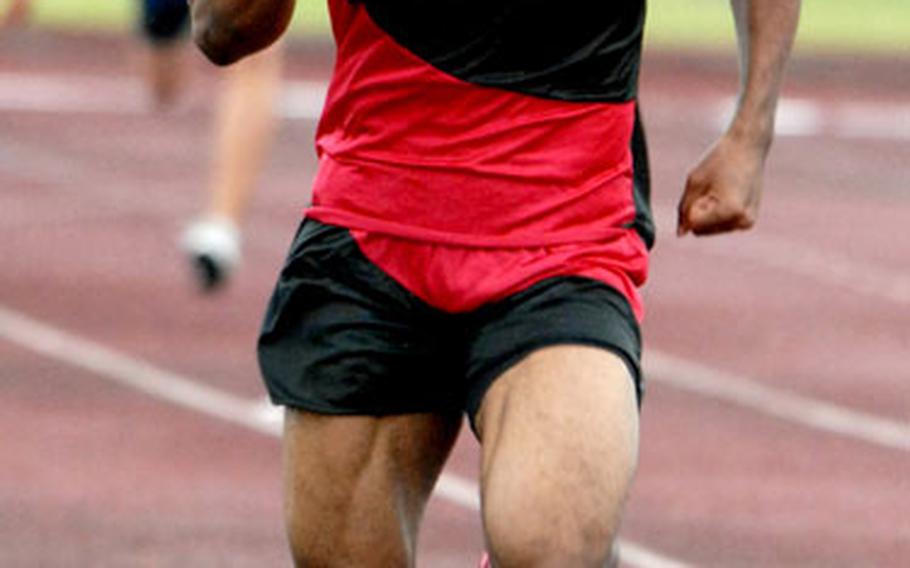 South Korea remains the only part of the Pacific without a DODDS-sponsored high school track and field program. An Army colonel based at Yongsan Garrison is trying to do something about that.

Two years ago, Kevin Madden formed the Seoul Track Club for high school athletes, in the hope that someday it might become a fully sponsored high school sport in Korea. This, despite swimming against a proverbial raging tide &#8212; lack of facilities, lack of money, lack of athletes &#8212; in a virtual cardboard rowboat with two matchsticks for oars.

A Level-2 International Amateur Athletic Federation coach, Madden has mentored high school and college programs in the States since he attended Northern Illinois University in the early 1980s.

When not working for the Joint U.S. Military Assistance Group-Korea, Madden has devoted time and money &#8212; for things such as starting blocks and the club&#8217;s red and black-trimmed uniforms &#8212; trying to convince DODDS higher-ups the importance of the sport.

From a handful of athletes in 2005, the Seoul Track Club has grown to as many as 37 athletes &#8212; 25 are signed up at this writing &#8212; including at least two, junior distance runner John Lohr and senior sprinter David Smalls, who ran for high schools in the States before coming to Korea.

Providing that opportunity at the high school level, however, may be far easier said than done, DODDS-Korea district officials said.

&#8220;We don&#8217;t see the initialization of a track and field program for our Korea district high schools in the near future,&#8221; assistant district superintendent Peter Grenier said.

For one, no regulation 400-meter track exists at any of the bases that house DODDS-Korea high schools. In fact, only one base in Korea has one, Camp Casey&#8217;s Schoonover Bowl.

For another, with the enrollment at Osan and Taegu at around 150 each, there simply aren&#8217;t enough students to field full teams at the same time as soccer, baseball and softball.

And then there&#8217;s the financial limitations, as the entire DODDS system has suffered borad budget cuts in the past several months, according to DODDS-Pacific officials.

&#8220;Funds, logistics, lack of facilities and an already eventful athletic schedule are the main reasons&#8221; that Grenier cited standing in the way of DODDS-Korea adding track.

To find athletes and build a program, Madden says he&#8217;s spent many hours watching Seoul American athletes in other sports, recruiting them face-to-face, as well as canvassing Osan and Taegu seeking interested parties.

A handful have responded, enough that Madden says he wants to bring them to Seoul or travel to Osan and Taegu for workouts.

Working to overcome the lack of facilities issue has taken some creative thinking. Madden&#8217;s assistant coach Ronnie Gray, an Army specialist assigned to Yongsan and a veteran of USA Track and Field competition in Arizona, has taken to lining training routes on Yongsan&#8217;s South Post.

A few times a month, Madden will take some club members to one of many dirt and cinder tracks along the Han riverside bisecting Seoul. Or they&#8217;ll make the 45-minute drive to the Chamssil sports complex, which hosted the 1988 Summer Olympic Games, where the warmup track is open to the public.

Lohr, who ran for the Loveless Academic Magnet Program in Montgomery, Ala., before transferring to Yongsan, says he and his teammates at times will rise at 4:30 a.m. to condition, or practice long after the dismissal bell.

&#8220;We&#8217;re wanting to get ready for the next level,&#8221; said Smalls, who ran for Norwich Free Academy in Connecticut before arriving in Seoul three years ago.

Madden brought four boys and four girls to the Petty Meet. The boys finished sixth as a team with 46 points, while the girls took ninth with 15 points out of 12 total teams.

That would be welcome news, Madden said.