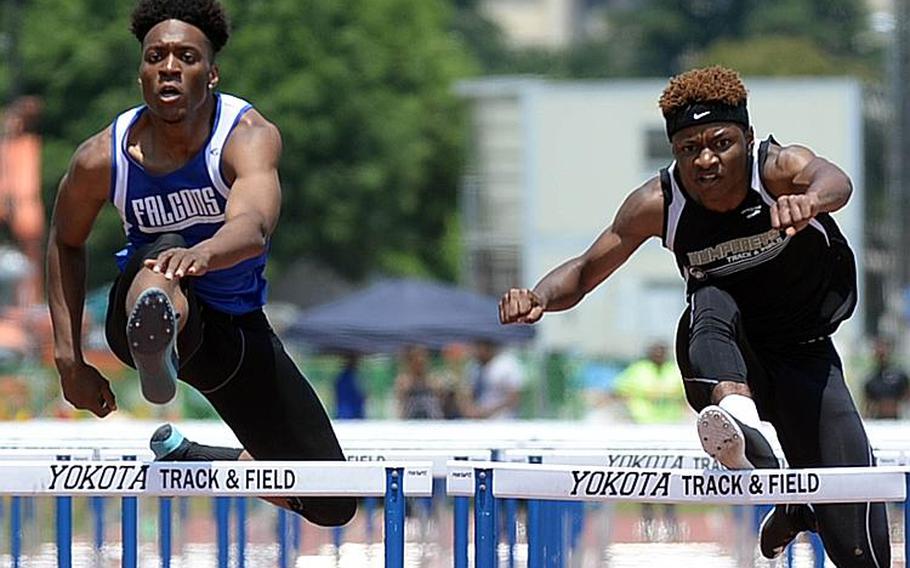 Seoul American's Christian Williams and Humphreys' Tim Ward negotiate the 110 hurdles, side-by-side, in the Far East track and field meet. The two hit the finish .01 seconds apart. Williams won the Division I title in 16.37 seconds and Ward the Division II in 16.38. DAVE ORNAUER/STARS AND STRIPES ()

Seoul American's Christian Williams and Humphreys' Tim Ward negotiate the 110 hurdles, side-by-side, in the Far East track and field meet. The two hit the finish .01 seconds apart. Williams won the Division I title in 16.37 seconds and Ward the Division II in 16.38. DAVE ORNAUER/STARS AND STRIPES () 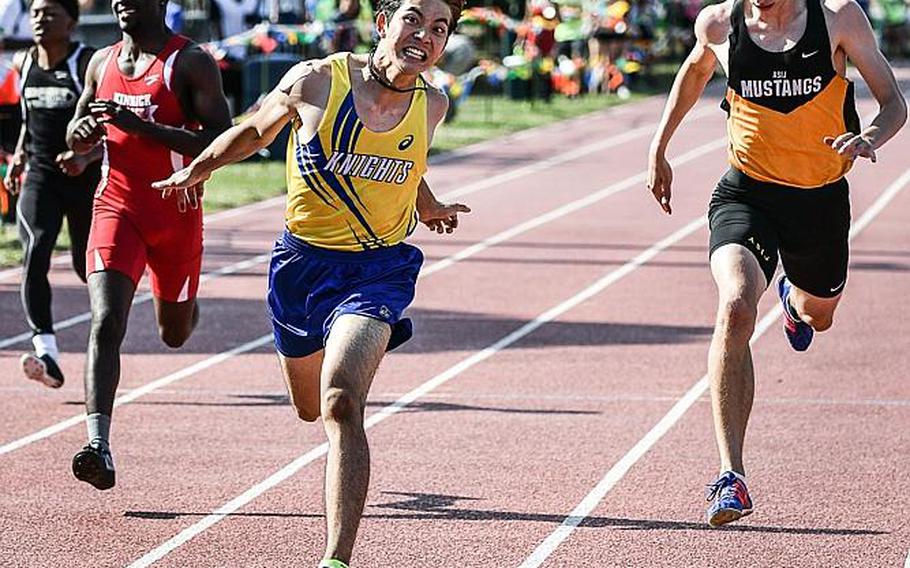 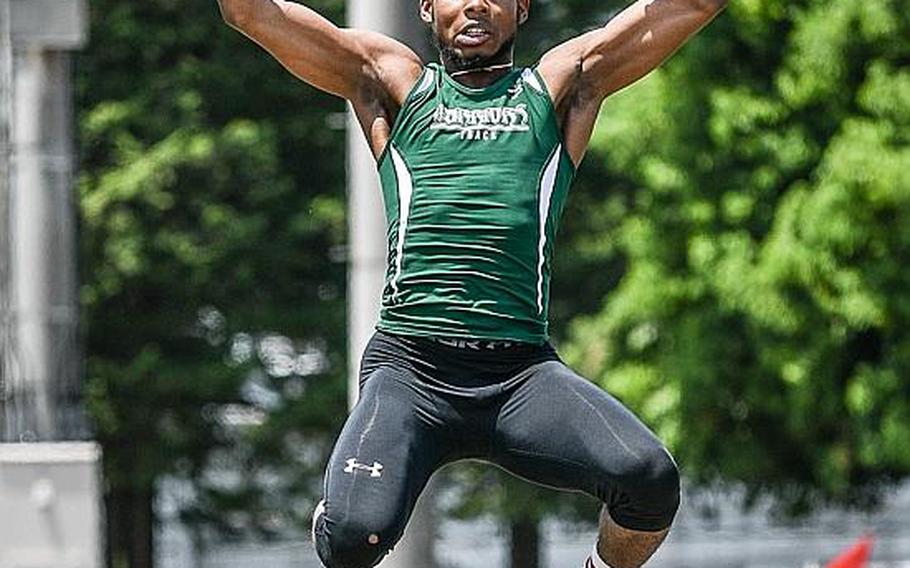 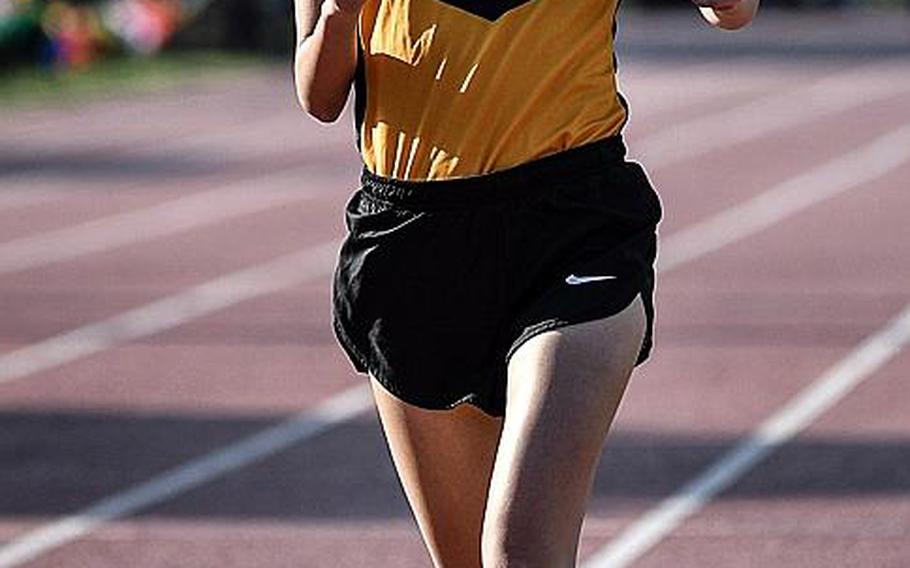 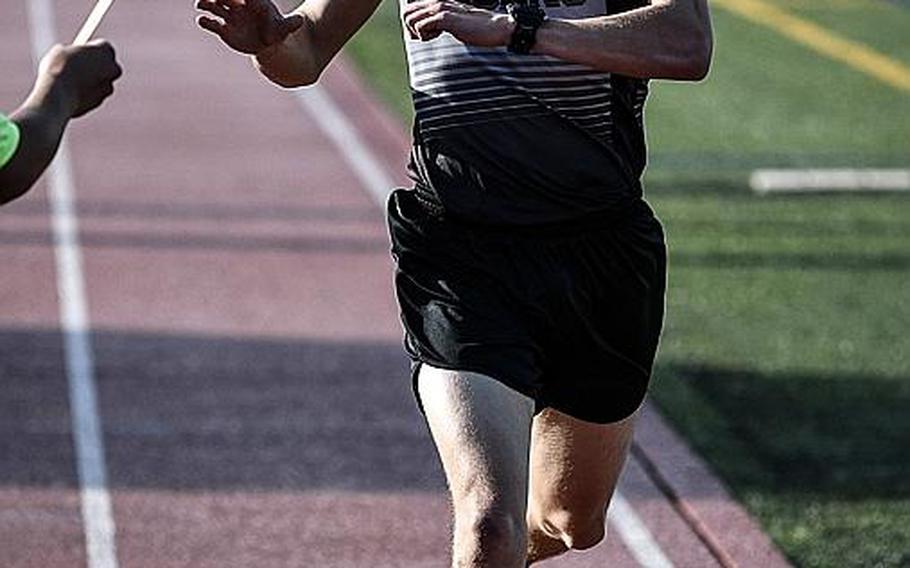 Zama senior Hunter Lund crosses the finish line in record time in the Far East boys 3,200-meter run, in which he was timed in 9 minutes, 43.44 seconds, topping the old mark of 9:57.80 set a year ago by Yokota's Daniel Galvin. JACK HIGBEE/SPECIAL TO STRIPES () 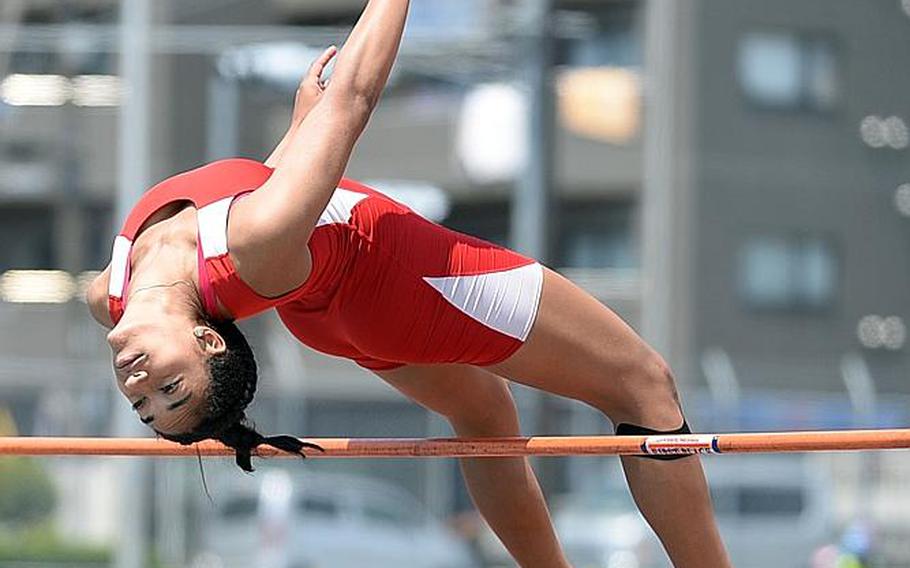 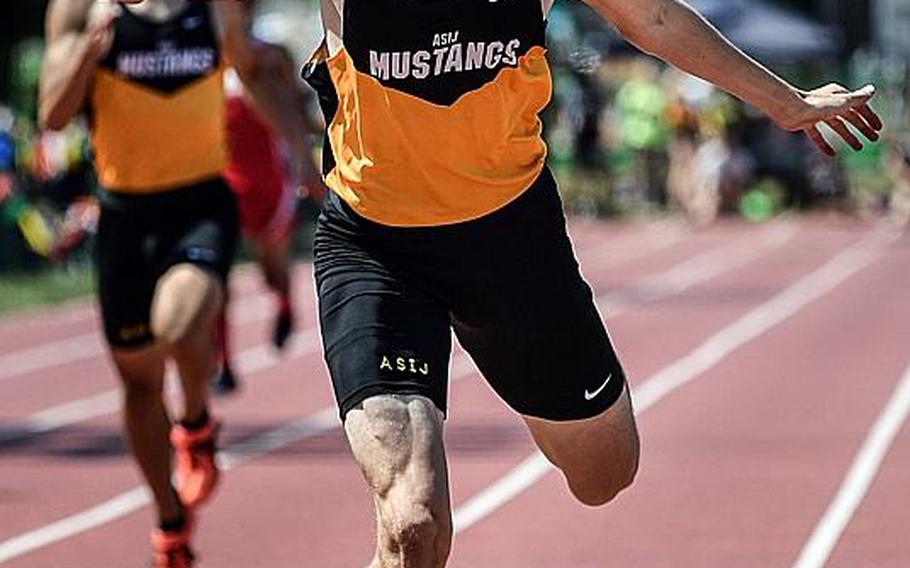 Despite a blister in his left foot, American School In Japan senior Britt Sease broke his own meet record in the 400 with a time of 48.16. He exits also holding the Pacific records in the 400 and 800. JACK HIGBEE/SPECIAL TO STRIPES () 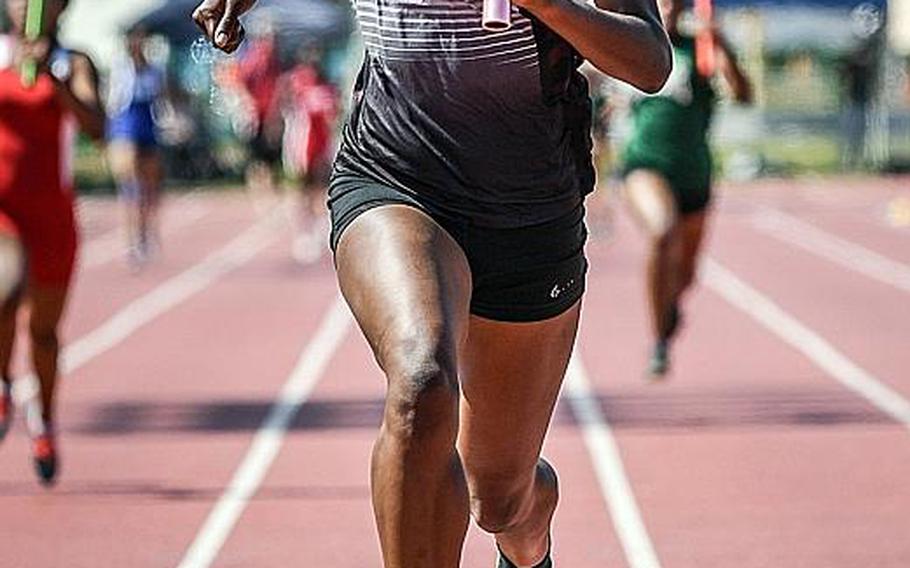 Zama senior Tasia Nelson pounds for the finish en route to breaking the Trojans' own meet record in the 400 relay, clocking 48.72 seconds. They ran 48.74 in the preliminaries on Monday. That came after Zama broke the Pacific record a week earlier, running 48.54 in the Kanto Plain finals. JACK HIGBEE/SPECIAL TO STRIPES () 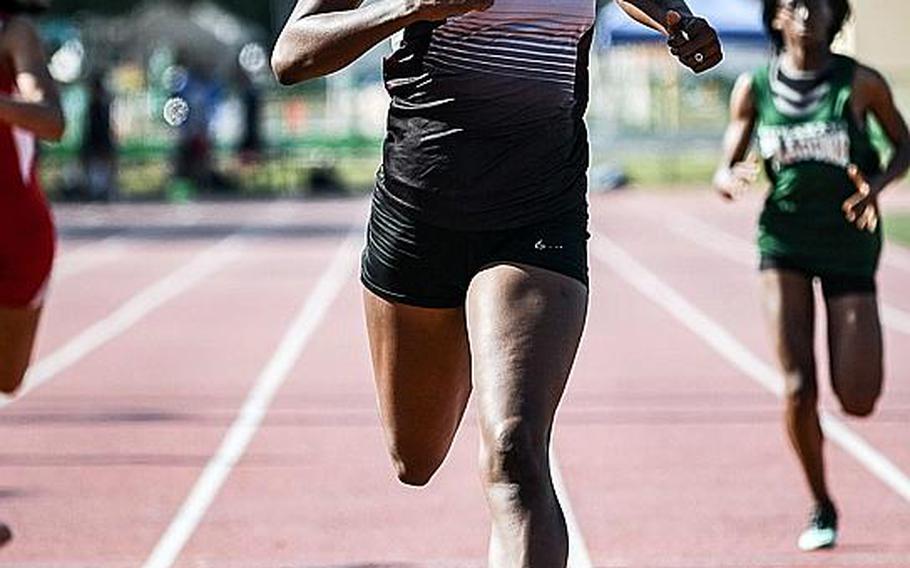 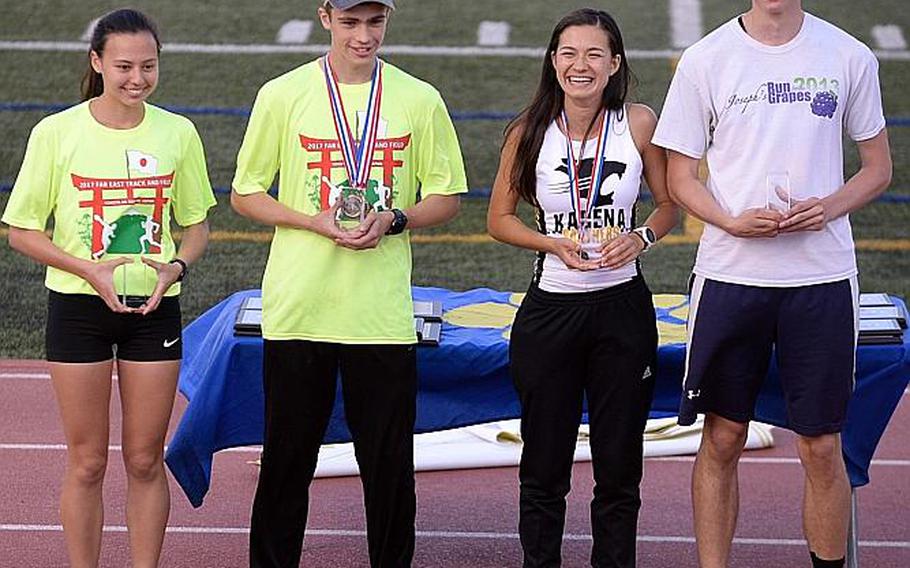 The Athletes of the Meet. From left, Zama's Jessica Hibler and Hunter Lund in Division II, and Kadena's Wren Renquist and American School In Japan's Britt Sease in Division I. DAVE ORNAUER/STARS AND STRIPES () 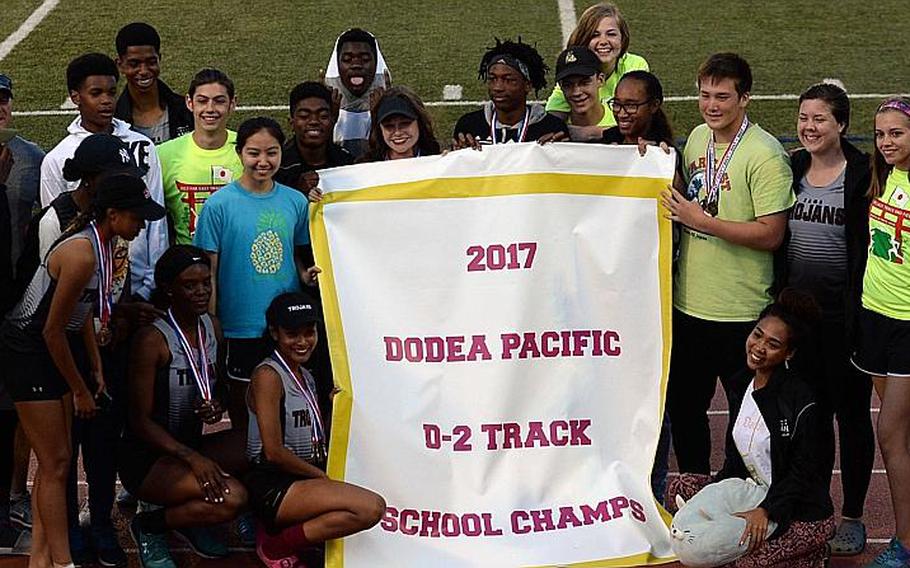 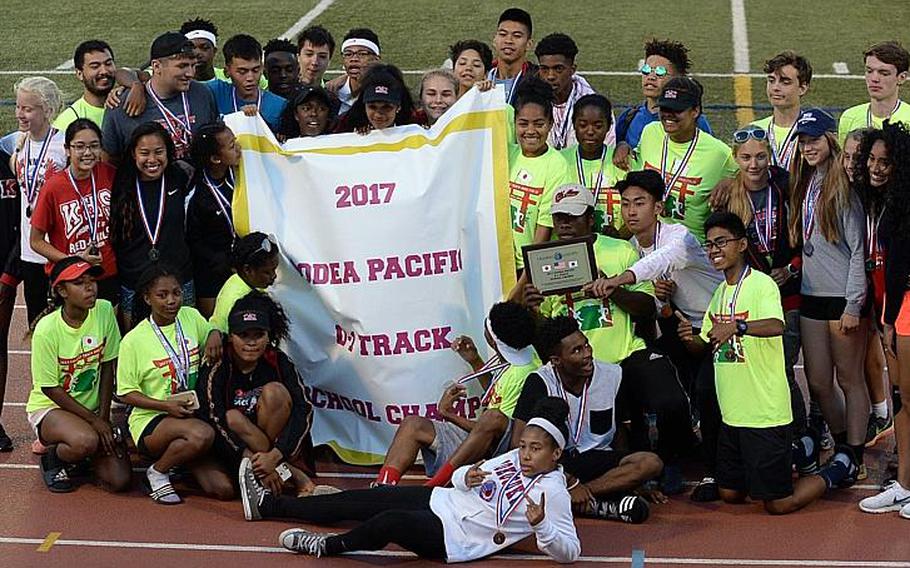 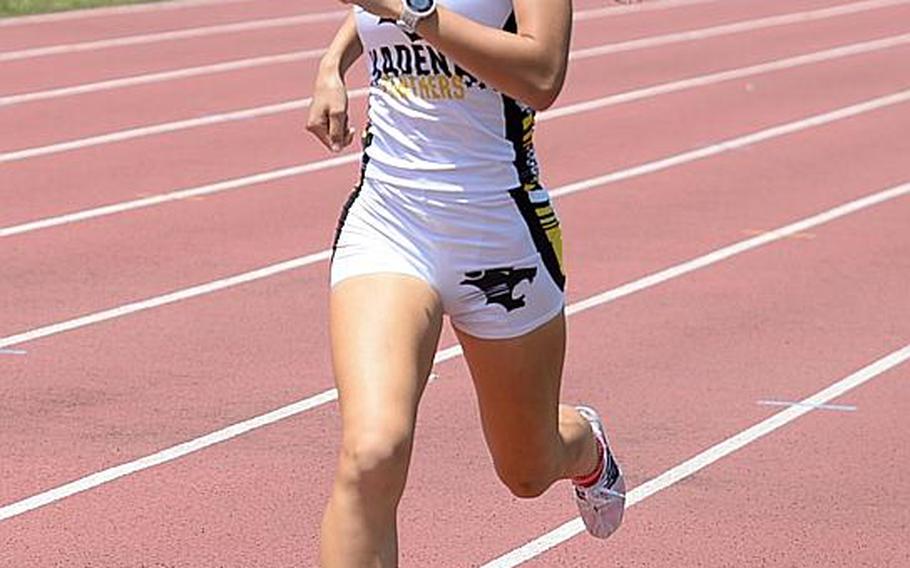 Kadena senior Wren Renquist hits the finsh in the 800 meters in the Far East track and field meet in 2 minutes, 23.44 seconds, her third race victory, which gave her Division I Athlete of the Meet honors. DAVE ORNAUER/STARS AND STRIPES ()

YOKOTA AIR BASE, Japan – Ti’Ara Carroll said she couldn’t think of a better end to her four-year career as a Zama sprinter.

“It’s a great way to end my senior year,” Carroll said after she, fellow senior Tasia Nelson, junior Faith Bryant and freshman Gwen Andersen broke their own meet record in the 400 relay. “That’s the way to go out, with a bang.”

The Trojans foursome on Tuesday shaved .02 seconds off the relay record they set in preliminaries Monday, clocking 48.72 seconds in the final. That came on top of the Pacific region record of 48.54 they set a week earlier in the Kanto Plain finals.

To top it off, the four also won the 1,600 relay, the last event of the two-day Far East meet, though not in record time.

“I’m sad that we couldn’t break our (Pacific) record” in the 400 relay, Bryant said. “But we got the (meet) record and I got to run with these guys one more time.”

For Andersen, the joyful moment also brought some sadness, as Carroll and Nelson graduate next month. “I’m getting a little emotional,” she said. “It’s the last time I’ll run with these guys. I’m kind of sad.”

For Red Devils coach Luke Voth, every one of the three titles “has something unique about them that makes them special. Our kids have high expectations. I attribute that to their hard work.”

Nelson bid her individual farewell to the Far East meet between the relay runs, topping the meet record in the 200, clocking 25.56 seconds, beating the mark of 25.73 set two years ago by Kubasaki’s Kaelyn Francis.

“I didn’t know what (the record) was,” Nelson said, adding that she was eyeing the manual timer at the finish line as she approached. “This was all out for me. The 200 is my main event. It’s the one I train for.”

The two records broken by Zama girls runners headlined the final day of the Far East meet as six meet records fell, bringing the two-day total to 10, including the Pacific girls shot-put record.

As a bonus for the Trojans, distance specialists Hunter Lund and Jessica Hibler were named Division II Athletes of the Meet. American School In Japan senior Britt Sease and Kadena senior Wren Renquist were so named on the Division I side.

“I’m so glad,” Kadena coach Maureen Taylor said of Renquist. “We were hoping she would get that. She’s worked so hard for it.”

Record breaking wasn’t limited to Zama girls athletes. Lund shattered the meet record in the 3,200-meter run, clocking 9:43.44, topping the previous mark of 9:57.35 by Yokota’s Daniel Galvin a year ago. His closest opponent was more than 17 seconds behind.

“He’s a machine. Nobody came close to him,” Trojans coach DeAngelo Galang said. “It’s a good way for him to go out, for sure.”

He said he could have gone faster had the blister not affected him in the first 100 meters. The blister developed during Monday’s competition in which he ran preliminaries in the 200 and 400 meters.

“But he still went for it,” coach Ryosuke Suzuki said of Sease. “He deserves it. Even with the blister, he ran every race perfectly. He ran this meet for the team.”

Brianna Hunter closed her brief career with Robert D. Edgren by shattering the meet record in the girls discus. The senior transfer from Missouri threw 33.89 meters on her last try, then broke down and cried as she realized what she had done on her final high-school throw.

“I let it go,” Hunter said. “I knew I was going to get something big. I was just going to leave it all out there, and I did.”

Helping lead the Red Devils to that D-I title three-peat was jump specialist Exotica Hall. The junior leaped 1.6 meters in the high jump, breaking the 5-year-old record of 1.56 set by Arrianna Guerra of Zion Christian.

Hall came up short of her personal-best 1.65 set a week earlier in the Kanto finals, and said she didn’t realize what the Far East meet mark was going into the event.

“I feel good about that now,” Hall said, adding that she’ll try to better her performance during her senior year. “For sure, on a good day, I know I can do it.”