Kinnick working to improve by a few points 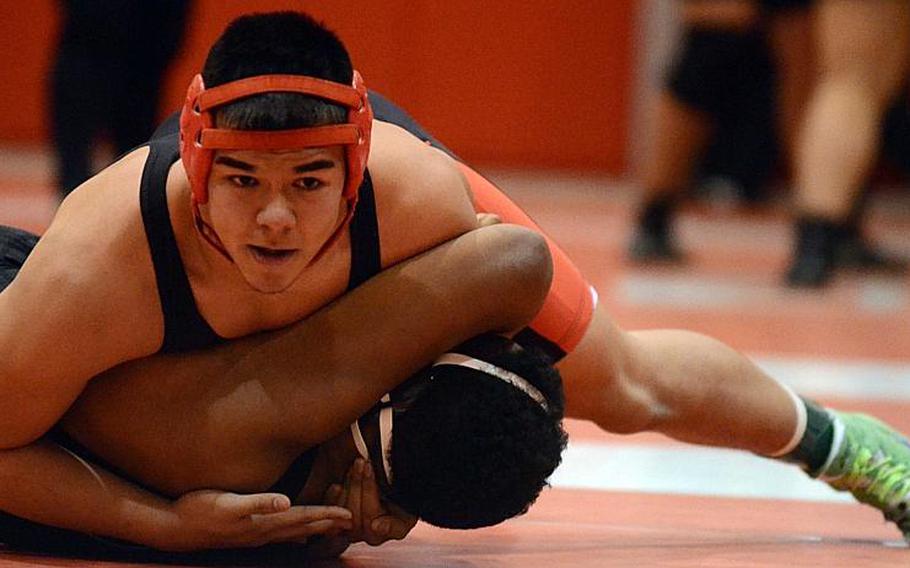 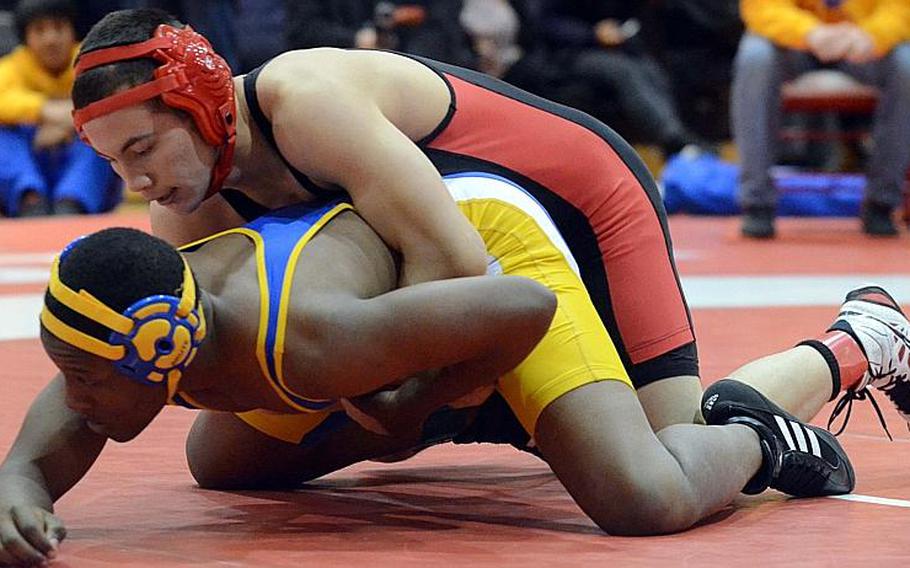 Senior 158-pounder Charlie Gann said he hopes that he and his Nile C. Kinnick Red Devils can pen a different ending than last year's Far East wrestling tournament, which saw he and five teammates finish second individually and the team finish second by one point in the individual freestyle standings and come up one victory short in the dual-meet tournament. (Dave Ornauer/Stars and Stripes) 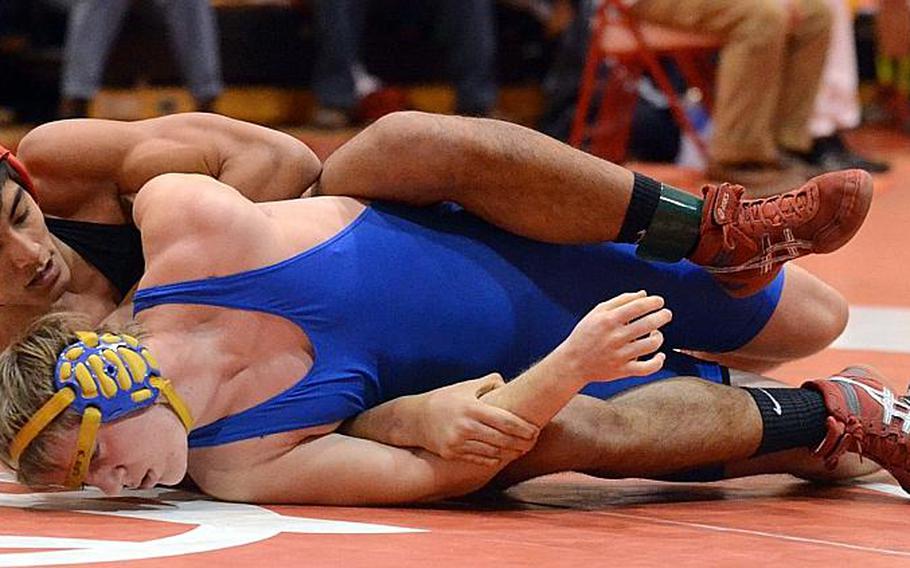 Senior 168-pounder Dustin Wilson said he knows Kubasaki, the reigning Far East wrestling tournament champions, have a formidable squad yet again, but that his Nile C. Kinnick Red Devils need not fear that, but step up and accept the challenge. "That's all we can really do," he said. (Dave Ornauer/Stars and Stripes)

YOKOSUKA NAVAL BASE, Japan – Heartbreak and disappointment ruled the day in the immediate aftermath. Just thinking about it seared like a raging forest fire in their bellies, hearts and minds through spring, summer, even through their DODDS Japan-championship football season.

One point. One match. That’s how close Nile C. Kinnick’s wrestling team came to capturing their eighth and ninth Far East individual freestyle and dual-meet team titles, only to come up just short, with Kubasaki extending its Pacific record for Far East titles in any sport to 23.

Seniors Charlie Gann, Dustin Wilson and Ian O’Brien, each of whom finished second last year, recall it vividly, and say coming up that short has provided all the motivation they need for this season.

“I thought it was our year to win it. It still bugs me today,” O’Brien said Friday, the day before Kinnick won its annual invitational tournament. “I hope this year, we can come back and get that title that we were supposed to have.”

“I thought about it all summer and I’d like to make a change to that,” Gann said.

All it would have taken to erase that 78-77 defeat to Kubasaki in the individual freestyle was for one of Kinnick’s six finalists to capture a title. Same held true for the dual-meet finals; had Wilson, Gann or O’Brien beaten their opponents, Kubasaki would not have won 32-26.

“It could have gone either way,” Dragons coach Justin Cook said. “One loss and we would have lost.”

Worse yet, the twin defeats occurred on the Red Devils’ home ground, the George I. Purdy Memorial Fitness and Sports Center, right across the street from the school.

“It’s terrible to lose from behind and on your home turf,” Wilson said.

“I think it’s harder if you lose a close one than if you get your hind end handed to you,” Kinnick coach Gary Wilson said, noting that St. Mary’s International beat Yokota by 39 points the year before. “It’s hard to feel too badly about that. This being one point, it’s tough.”

But rather than wallow in that disappointment and heartbreak, the one-point, one-match defeats have given the Red Devils incentive to take the next step, coach and wrestlers said.

The words “one point” are uttered often during Kinnick workouts in the Hawks Nest, one floor above the USO on Yokosuka Naval Base.

“That pushes everybody,” Dustin Wilson said. “The last 10 seconds, get that extra (repetition), spin, hit and move that you wouldn’t usually do. Work that much harder in practice.”

“It burns me deeply,” Gann said. “Whenever I hear ‘one point,’ I think about last year, and motivates me to bring that last 10 seconds of intensity. Work harder until I drop.”

So far, it has paid off. The Red Devils are unbeaten in every dual meet and tournament. Their next event is Saturday, a six-team Kanto Plain Association of Secondary Schools dual tournament at American School In Japan.

No matter whether they win or lose, Dustin Wilson said, it’s all about keeping their eyes on the prize. One point, one match is “motivation, but at the same time, it reminds you to stay humble to everything and keep your mind focused on your goals.”

Whether they’re able to achieve those goals is a matter of how much Kinnick can do with about half the squad that wrestled at Far East last year. Runner-up Zach Yoder graduated and fellow silver medalists Marvin Newbins and Daniel Costello transferred.

“Having experienced returning Far East wrestlers makes a huge difference,” Gary Wilson said. “Unfortunately, Kubasaki has a few more than we do. Our work is cut out for us. We have to try to get better, we can’t be complacent. Even if our league is down this year, that’s no excuse. We have to continue to get better.”

The goal for the coaches, Wilson said, is to get the Red Devils “back in that situation again, to get ourselves close, give us the opportunity to try it one more time.”

Cook is all too aware of Kinnick’s purposes this season. “They want revenge,” he said. “They were a very formidable team (last year) and it looks like they’re going to be a formidable team again this year.”

Likewise, the Red Devils know they’re also in for a battle. “You stay a little worried about every team you face,” Dustin Wilson said. “It’s not that we’re afraid, but that we accept the challenge and go after it. That’s all we can really do.”

If that formidable team can take the last step to a Far East team championship, “it would be a milestone, the best thing that ever happened in my high school career,” O’Brien said.