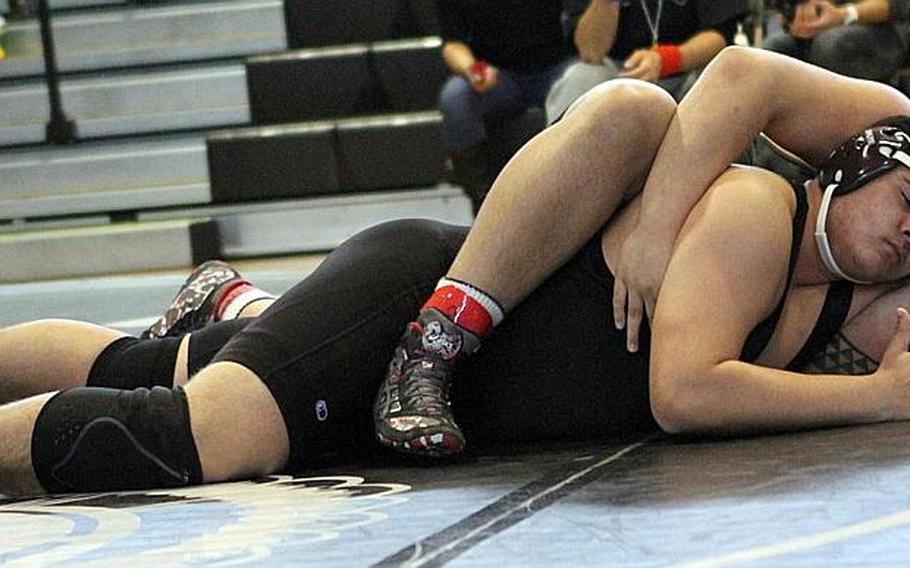 “That’s what we’re all geared up for,” Red Devils coach Gary Wilson said of tournament time. The Kanto finals are first on the docket, the final tune-up for the six Kanto wrestling schools before the Far East Tournament next Thursday-Saturday at Yokota.

It figures to be a two-team race, Wilson believes: His Red Devils against a host St. Mary’s Titans team that, while not as powerful as the one that scored back-to-back Far East Division I team title sweeps in 2011-12, can still be a major threat.

St. Mary’s is “solid at a lot of weight classes and good at the others,” Wilson said of a team featuring reigning Far East champions Ryan Vasconcellos and Jeffrey Koo. “They’re a formidable foe. With the varsity vs. varsity format, it’s going to be tough.”

It’s theirs and Osan’s and Humphreys’ last tune-up before their own Far East tournaments, scheduled for Feb. 17-19 in Division II and Feb. 17-20 in D-I.

Though tournament time will begin this weekend, some regular-season games remain in Japan and Okinawa on the hardwood.

Kadena visits Kubasaki in boys and girls basketball, with the Panthers’ girls and Dragons’ boys looking to seal their regular-season series at 3-1 and their opposite numbers seeking 2-2 splits. Kadena has not lost the girls four-game season series in 10 years.

Play in the Independent Interscholastic Athletic Association of Guam continues over the weekend and into Tuesday, when the league begins its annual two-week Far East tournament break. Guam visits St. John’s on Friday and entertains Simon Sanchez on Saturday.