King a contender in Class A 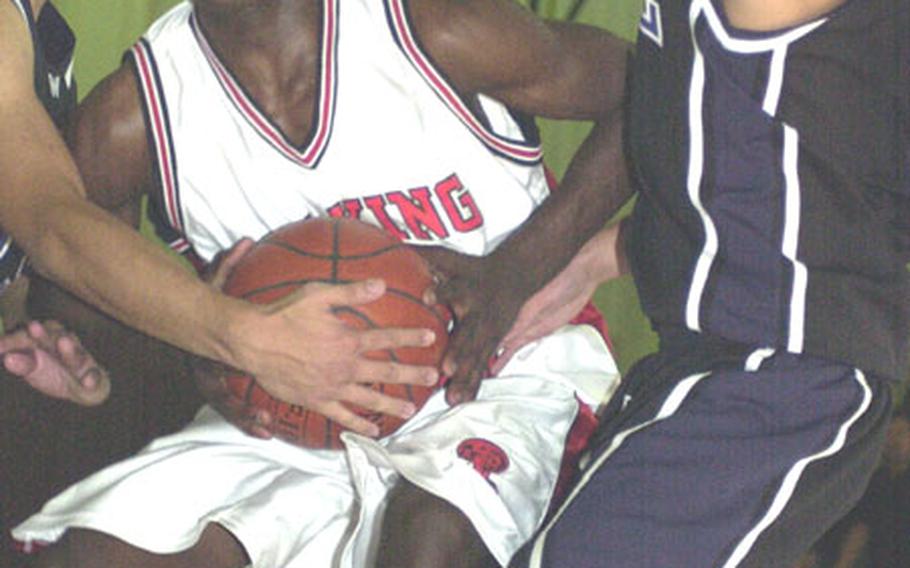 &#8220;We didn&#8217;t really show what we could do until today,&#8221; senior center Carlos Solorzano said Friday after the Cobras shocked defending champion Osan American 50-45 and came close to upending the other No. 1 double-elimination playoff seed, St. Paul Christian of Guam, before losing 57-53.

The second outcome was a far cry from E.J. King&#8217;s 77-52 loss Thursday to the Warriors, a defeat that had many observers leaving the Cobras for dead, despite a 3-1 round-robin record.

Such talk left the Cobras feeling like they were getting no respect from the rest of the field.

&#8220;We were thinking that we were the favorites coming into the tournament, even if nobody else did,&#8221; junior All-Far East guard Draonne Johnson said.

What caught people&#8217;s attention was the return to the lineup of Solorzano, hobbled by a sprained ankle suffered in warmups on the first day of the tournament, and a man-to-man defense that gave the Cougars and Warriors fits.

E.J. King forced the Cougars into six turnovers and 0-for-10 shooting in the first quarter. Osan didn&#8217;t get its first basket until 6:41 remained in the first half, and the Cobras led by 17 points early in the third quarter.

Johnson led the Cobras with 13 points and Andrew Stephens and Mark Bote each had 10. Solorzano grabbed 12 rebounds.

One third-quarter stretch, in which the Cobras turned it over five straight times during a 12-point St. Paul run, proved costly. The Warriors went up 43-36 and didn&#8217;t trail again.

Andrew Borja, who led the Warriors with 17 points, acknowledged the presence of Solorzano, who grabbed 16 rebounds and &#8220;made a difference on both sides of the court.&#8221;

That heart and the sudden transformation of the Cobras made it a wide-open race to Saturday&#8217;s finish line, with St. Paul needing one victory to seal its second Class A title. Osan and E.J. King were left to battle it out in the loser&#8217;s bracket.