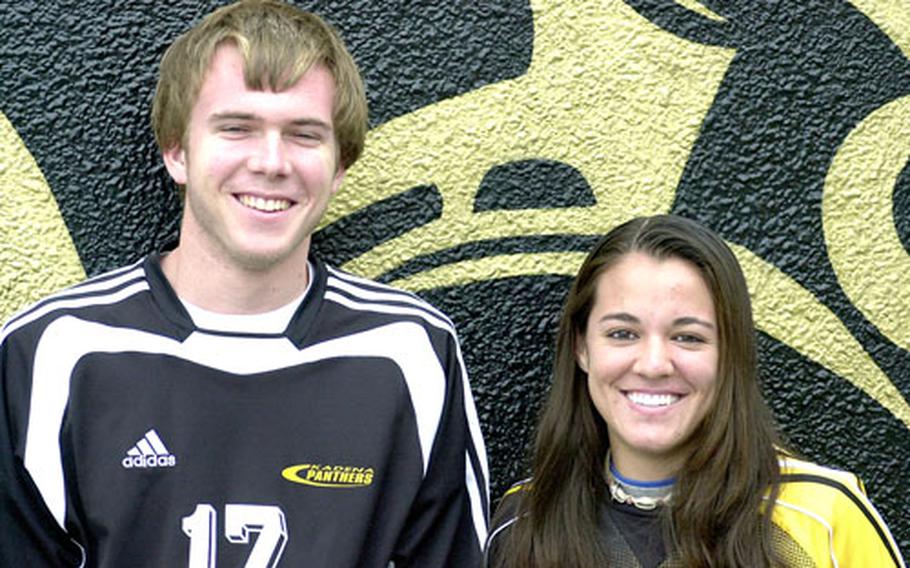 KADENA AIR BASE, Okinawa &#8212; Two star strikers for Kadena High School&#8217;s soccer teams have signed letters of intent and will take their games to NCAA Division I next fall.

Dianne Abel and Nathan LaGrave are the eighth and ninth former Panthers to play collegiate sports in the past three years.

Abel, a record-setting girls goal-scorer, will join her former Kubasaki Dragons archrival and closest friend, Erin Foote, at Winthrop University of the Big South Conference. LaGrave will suit up for Bucknell of the Patriot League. Each earned partial athletic grants-in-aid from their respective schools.

The Patriot League, which includes Navy and Army, does not award scholarships but grant-in-aid packages. LaGrave didn&#8217;t give specific dollar figures but said his award covers about 50 percent of the total cost.

The son of DODDS educators Lon and Janet LaGrave is a two-time All-Class AA center-midfielder and MVP of the 2004 Class AA tournament. He scored 25 goals and assisted on 14 for a Kadena team that has gone 39-1-2 the past two years.

&#8220;He is the kind of player every coach would like in their lineup,&#8221; Panthers assistant coach John Reay said. &#8220;He plays with a maturity well beyond his years. He possesses exceptional technical ability and tactical awareness, a combination rarely seen in a player his age.&#8221;

Abel, the daughter of retired Marine Corps Capt. David Abel, will join an Eagles squad that went 8-10-1 overall and 3-5, tied for seventh in the eight-team Big South Conference. Her &#8220;sizeable, significant&#8221; scholarship package covers from 50 to 60 percent of total cost, David Abel said.

Abel owns the Pacific season record with 66 goals, set in 2005 as a junior when Kadena won its second straight Class AA tournament title. She enters her senior campaign with 112 career goals for a Kadena team that has gone 39-1-2 the last two seasons. The reigning two-time Class AA tournament MVP had 100 goals and 46 assists in that span.

Abel and LaGrave each got exposure to their respective coaches by attending their schools&#8217; summer soccer camps, Bucknell&#8217;s at Lewisburg, Pa., and Winthrop&#8217;s at Rock Hill, S.C.