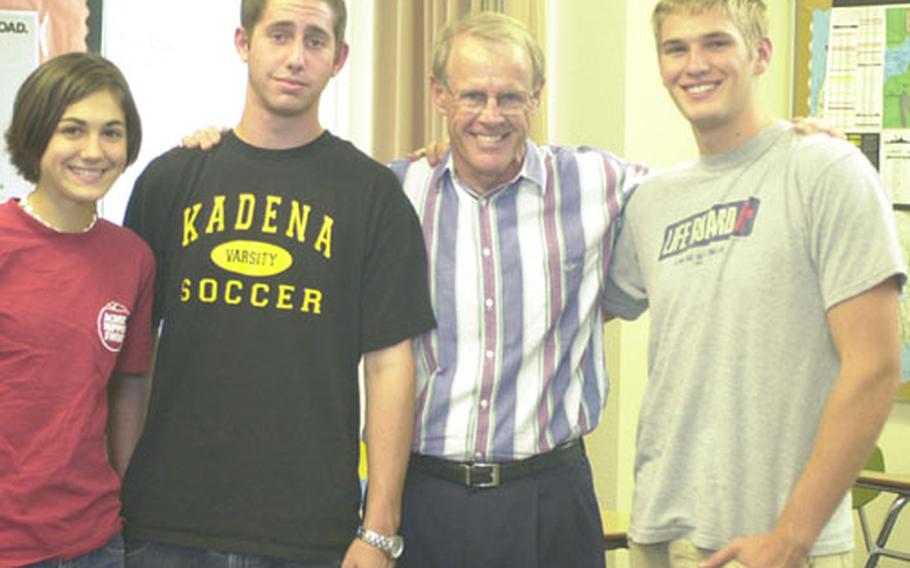 Niki Kauzlarich and Jon Turner, left, and Cliff Johnson, right, flank longtime Kadena Panthers cross-country coach John Dawson, who has coached the team since the school opened its doors in the fall of 1981. (Dave Ornauer / S&S)

KADENA AIR BASE, Okinawa &#8212; After nearly a quarter-century of being involved in Far East cross country, John Dawson is leaving Kadena High School.

After 35 years in the Department of Defense Dependents Schools system, Dawson, 60, the only DODDS-Pacific coach to win a Far East championship, is retiring. In 23 seasons, he led Kadena to team titles in 1984 and 2002.

&#8220;It&#8217;s tough to replace a legend,&#8221; said his successor, Tom McKinney, who transferred to Kadena from Seoul American last summer, took over the team last fall and led the Panthers to the Okinawa Activities Council championship.

&#8220;Knowledge, what to do in certain meets, how to run against certain competitors, what to do, who to push,&#8221; McKinney said of the things Dawson brought to the team. &#8220;He got his homework done. He knew how to push his team. They could have run blind this year. His teams were well-prepared.&#8221;

More than imparting wisdom about running skill, how to condition, how to adjust to the elements, how to adopt pace, Dawson was a great motivator.

The 2002 championship came as a surprise to Dawson, who felt his squad was an underdog to Guam public and Tokyo international schools.

Though the 2002 team was among the few that finally overcame long odds against Guam and Tokyo schools, Dawson emphasized that all of his squads brought similar traits to the course.