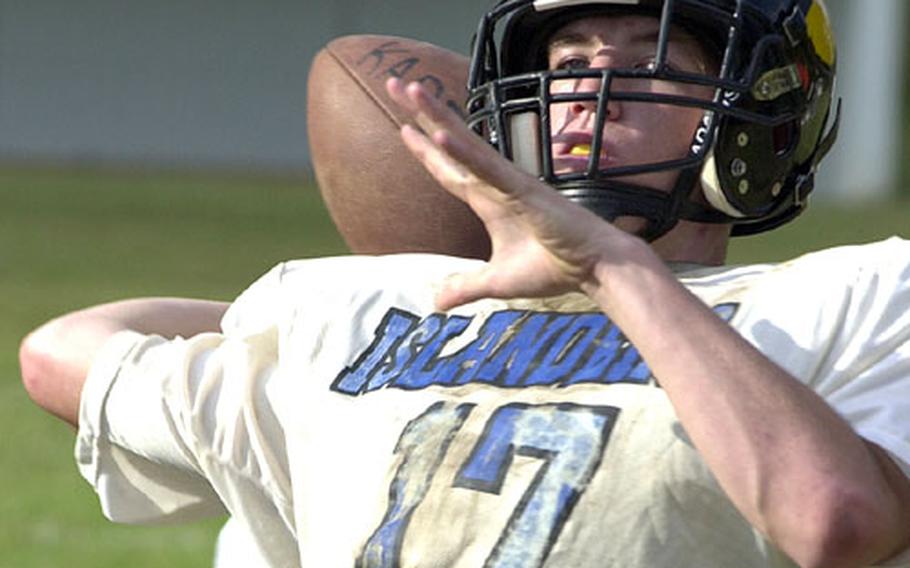 Hollywood couldn&#8217;t have scripted it better: Never in their 25-season rivalry have Kadena and Kubasaki football teams faced off with so much on the line.

With the Okinawa Activities Council best-of-three series tied 1-1, Kadena and Kubasaki do battle Friday night for island bragging rights &#8212; and a berth in the Far East Class AA semifinal Nov. 5.

It&#8217;s what both parties said they wanted when they designed the new OAC football system last spring.

Nine weeks of practice and scrimmage games preceded the best-of-three regular-season series, which Kubasaki opened Oct. 14 by routing Kadena 35-3. Then last week, the Panthers pulled off a riveting 7-6 overtime victory.

When Kadena and Kubasaki last took the field as Dragons and Panthers, the best-of-three All-Star series meant only bragging rights. It took place after the split-squad regular season, which determined the island champion and the OAC representative in the old Rising Sun Bowl.

Now, Kadena or Kubasaki will play Guam High on Nov. 5 for the right to host the first Class AA championship game Nov. 12 against the winner of the Yokota-at-Seoul American semifinal.

It also turned on its ear a series in which the Dragons clearly seized the momentum, turning three Kadena turnovers into touchdowns in the first half of the series opener at Kubasaki&#8217;s Mike Petty Stadium &#8212; which hosts Friday&#8217;s third game.

Game 2 began with a chip fracture and ligament strain sidelining a key Kubasaki playmaker, senior tight end Stephen Thompson, for the season. Now Kubasaki must replace the player who racked up 128 all-purpose yards and two touchdowns in the opener.

The big question, the coaches say, is which team will muster more offense. &#8220;We need to perfect the offense and turn it into a scoring machine,&#8221; said Wetherington. &#8220;Secure the football, no penalties, no turnovers which can affect the outcome of the game.&#8221;

Both teams worked quite a bit on passing this week.

The Top Ten teams in the Stars and Stripes2005 Far East high school football ratings, with records through Oct. 22, points and week’s rating, as compiled by Stripes sports reporter Dave Ornauer. Ratings are based primarily on teams’ win-loss records, quality of wins, strength of overall roster, point differential, team and individual statistics, strength of schedule and strength of leagues. Maximum rating is 500 points: