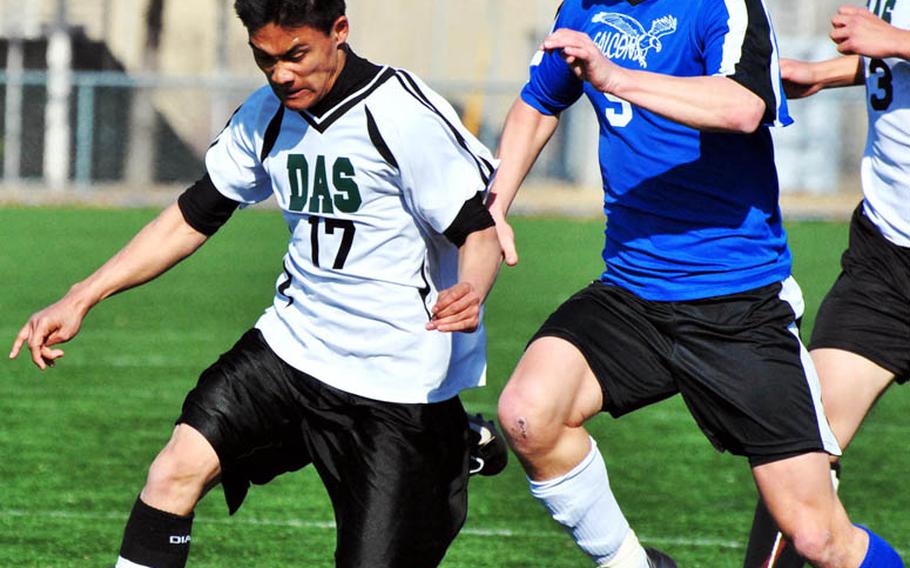 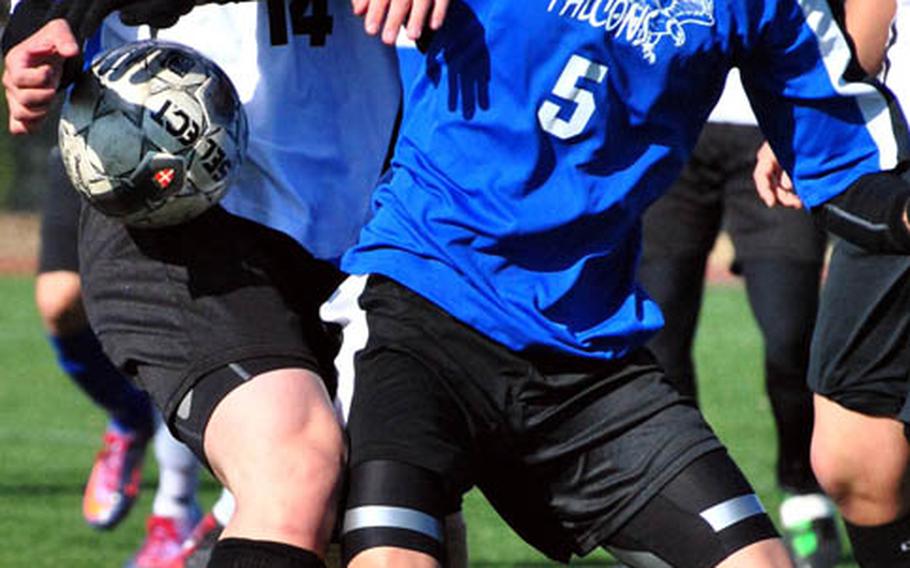 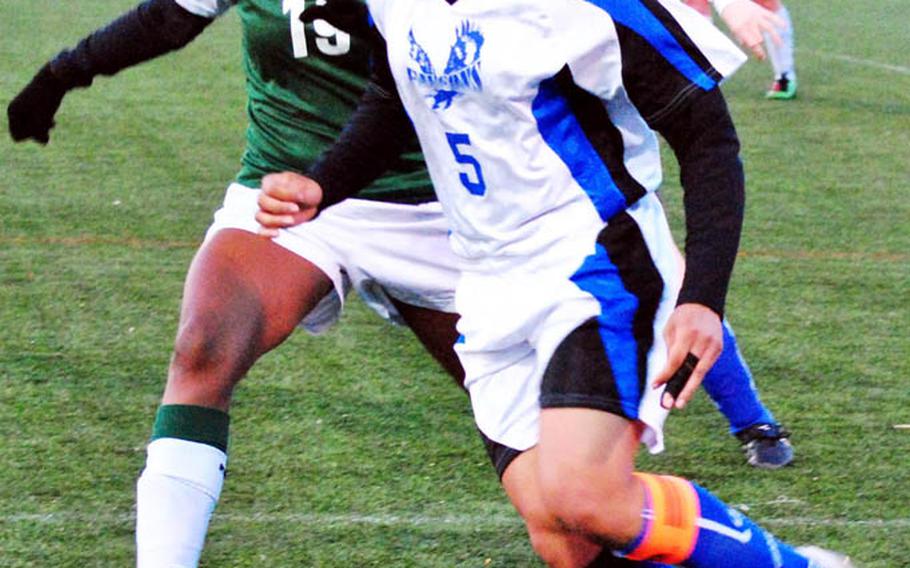 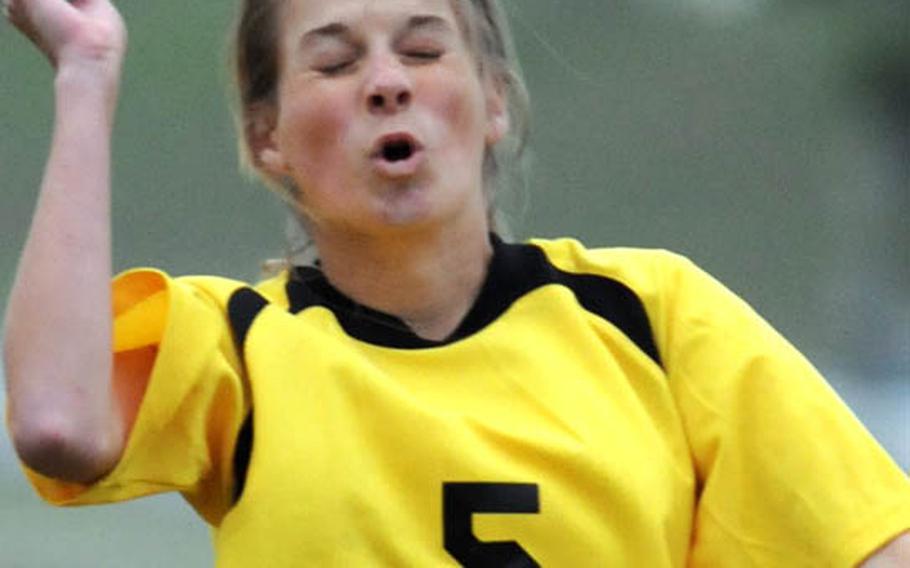 What a difference two weeks make.

After Kadena took a 6-0 pounding on March 11 at Kubasaki, Jasmine and Bria Pressley worked in tandem, combining for all of Kadena&rsquo;s scoring as the Panthers evened the Okinawa Activities Council season series with a 3-2 home victory Friday over the Dragons.

&ldquo;It&rsquo;s a matter of the girls getting to know each other better and working together better,&rdquo; coach Paul Chirichetti said after Kadena&rsquo;s first win of the season.

&ldquo;They&rsquo;re working more together as a team.&rdquo;

The teams are the most decorated in Far East Division I Tournament history, with Kadena holding four titles and Kubasaki three.

Jasmine Pressley, a senior midfielder, bookended the Panthers&rsquo; scoring with a pair of free kicks from 35 yards out on the left side, the first in the eighth minute and the second in the 74th.

Bria Pressley&rsquo;s goal in the 68th minute put the Panthers ahead to stay, 2-1.

&ldquo;Obviously, Jasmine and Bria kicking those goals was really good, but the more the team puts in its time, the more they&rsquo;ll know what they&rsquo;re supposed to do,&rdquo; Chirichetti said.

Kubasaki responded with Elizabeth Fabila&rsquo;s penalty kick in the 23rd minute. In the final minute of full time, Fabila cut the gap to 3-2, but it was too little, too late.

&ldquo;We didn&rsquo;t do a good job staying in front of the ball, and playing disciplined on defense,&rdquo; Dragons first-year coach Shawn Green said. &ldquo;I think we had some errors in the back, a couple of unforced errors.&rdquo;

Even after his Dragons routed Kadena in the first meeting, Green thought the teams were &ldquo;very evenly matched, no doubt about that.&rdquo;

&ldquo;And this series is going to swing back and forth, we know that. We&rsquo;ll take some positives from the negatives. We&rsquo;ll learn what we need to do and come back stronger next time.&rdquo;

Daegu girls escape with draw vs. FalconsIn a six-day stretch, Daegu American&rsquo;s girls came away with a win and a scoreless tie against defending Far East Division I champion Seoul American. The 0-0 draw came on a blustery, chilly Friday at Camp Walker&rsquo;s Kelly Field.

&ldquo;I&rsquo;m glad we escaped with the scoreless tie here,&rdquo; Warriors coach Ed Thompson said. &ldquo;Either of us could have scored. They had chances, we had chances.&rdquo;

Daegu is off to a school-best 4-0-2 start, but has Taejon Christian International, league-leading Seoul Foreign and two-time D-II Tournament champion Osan American in the way.

Chung, Naputi fuel run for Seoul American boysStriker Josh Naputi suffered an injury in Seoul American&rsquo;s boys&rsquo; second match of the season. With Naputi on the shelf, the Falcons struggled to a 1-3-2 start. Since his return to the lineup, he has three goals and Seoul American has won three straight matches.

Naputi scored twice and assisted on a goal, and midfielder Josh Chung added a goal and an assist as the Falcons blanked Daegu American 5-0.

Chung is &ldquo;steady, arguably the team&rsquo;s MVP, he can play almost any position,&rdquo; Boyd said. The two Joshes have &ldquo;good chemistry&rdquo; together, resulting in harder work and more scoring chances &ldquo;and it&rsquo;s showing in our play,&rdquo; Boyd said.