Kadena closes in on first place after throttling weary Misawa 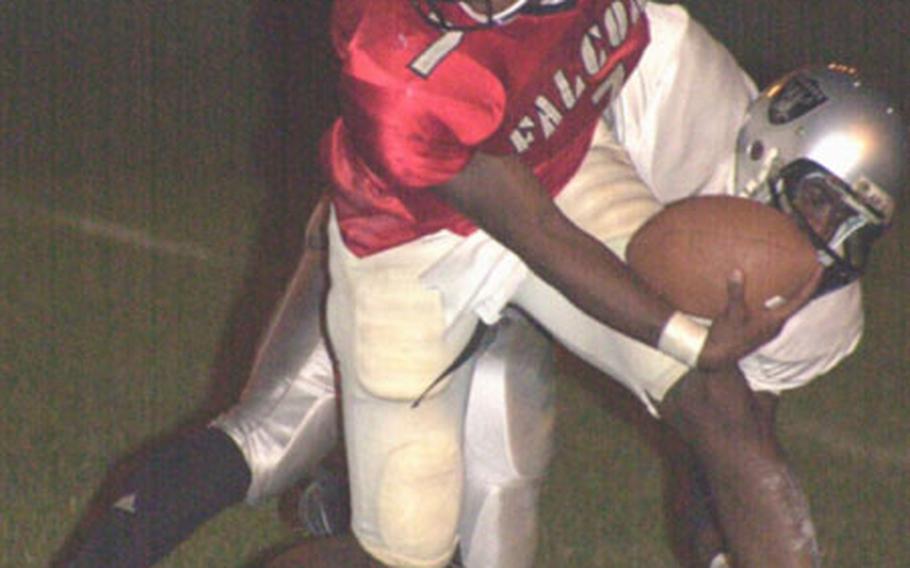 &#8220;The offensive line came out strong, controlled the line of scrimmage, pushed people around and moved the ball,&#8221; said Kevin Mattix, who served as Kadena&#8217;s head coach.

Glen Ballard was in the United States enrolling his son, Jason, a former two-way prep standout at Kubasaki, in college.

Hickman (6-for-12 for 90 yards) threw a 21-yard TD pass to James Francis at the end of the third quarter and capped the scoring with a 12-yard strike to Tarrick Jackson with 1:16 left. Trent Beavers ran 45 yards for a score and Kareem Eubanks had a 9-yard touchdown run in the first half.

Beavers had 126 all-purpose yards on eight touches, while Hickman added 105 yards on 14 plays. Shawn Patterson had a fumble recovery and sack for the Kadena defense, which recorded two sacks and forced three turnovers.

The victory gave the Dragons (4-2) sole possession of second place, a half-game behind three-time defending champion Yokosuka (4-1). They&#8217;re in the driver&#8217;s seat to host a first-round playoff game Sept. 13 against the third-place team.

The Marauders (3-2) fell into a third-place tie with Atsugi, though Misawa holds the tiebreaker after outscoring the White Dolphins by 16 points in their two encounters.

The Marauders, who fielded 26 players to Kadena&#8217;s 20, refused to blame the island heat, an environment 20 degrees warmer than Misawa Air Base this time of year, their four-hour flight to Okinawa on Wednesday morning or the uncertainty of billeting at Kadena Air Base.

&#8220;We simply got outplayed,&#8221; said Misawa coach John Hemphill, who learned after the game that billeting had been secured for his team. &#8220;When you play Kadena, they come at you wide-open, with speed, heart and a desire to play, which they did tonight.&#8221;

Lang finished with 104 all-purpose yards on three touches. The Marauders forced four turnovers but were outgained 307-142.

The loss severely damaged Misawa&#8217;s shot to win the regular-season title, gain a first-round playoff bye and a chance to host the league championship game on Sept. 20.