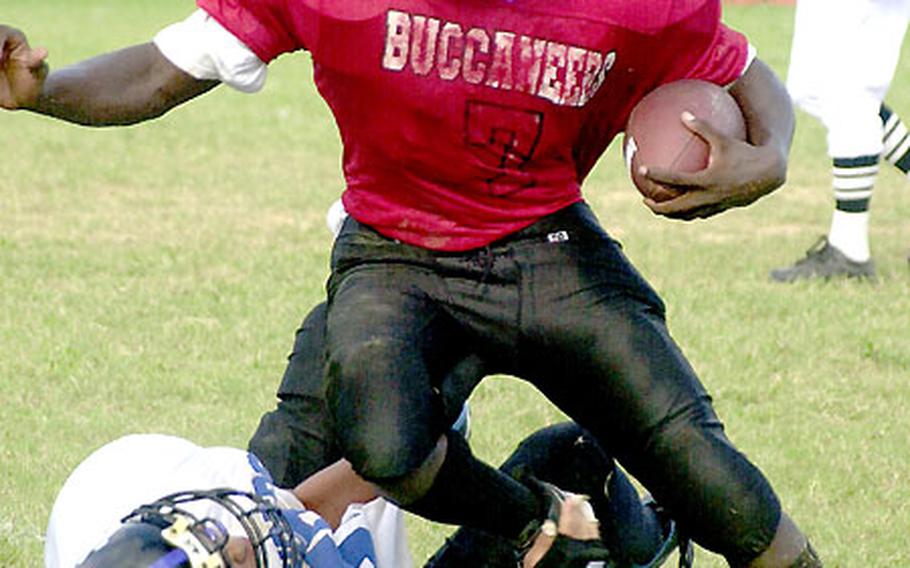 Kadena Buccaneers senior A.J. Morgan (with ball) has 487 all-purpose yards and 5 TDs in the past two games. (Dave Ornauer / S&S)

All eyes will be on Morgan, the Buccaneers&#8217; senior quarterback/tailback/linebacker/return specialist who has amassed 487 all-purpose yards, five touchdowns, three interceptions and a fumble recovery in the past two games.

Morgan rushed 12 times for 100 yards and a touchdown against the Islanders. He also had 63 yards passing and returned four kicks for 82 yards.

Bucs coach Brian Wetherington said Morgan always had the talent but has augmented his game with a huge dose of determination this season.

What has lighted such a fire under Morgan? Wetherington points to last year&#8217;s island championship game &#8212; in which the Samurai beat the Bucs 35-27 &#8212; for creating a hunger that is fueling Morgan this season.

That hunger is a big reason people such as Burns and Mendoza feel Morgan will be difficult, if not impossible, to stop.

&#8220;It takes focusing on him,&#8221; chimed in Mendoza, adding that keying on Morgan comes at the risk of not covering other Bucs weapons, such as running back Tyler Schmidt (46 carries, 368 yards, seven TDs), as carefully.

The Samurai get the first crack at Morgan. But some feel the Buccaneers&#8217; advance to the championship is a foregone conclusion.