A Zama Trojan is tackled by Edgren players. (Christopher B. Stoltz / S&S)

A Zama Trojan is tackled by Edgren players. (Christopher B. Stoltz / S&S) 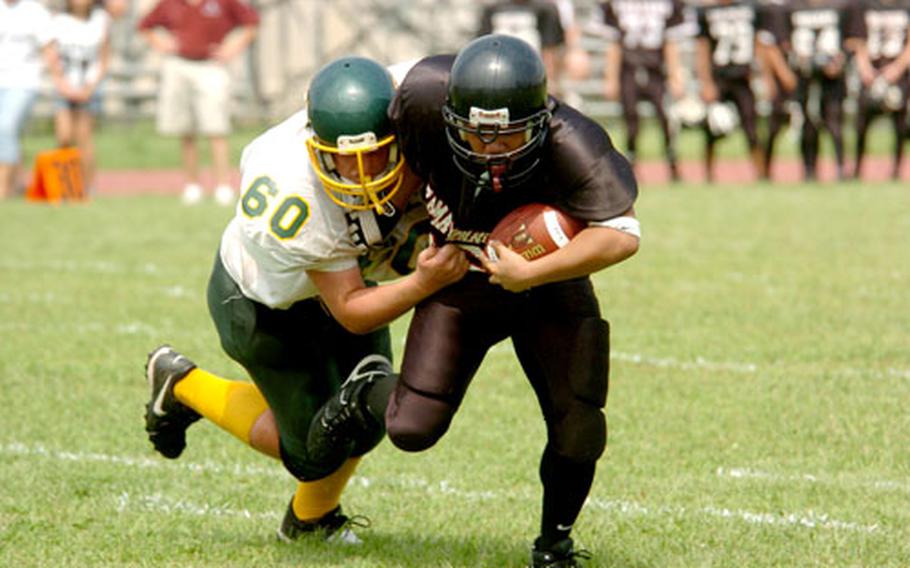 The junior outside linebacker tackled running back Christian Sandiko in the backfield on a two-point conversion attempt in the fourth quarter, preserving the Eagles&#8217; 7-6 victory over Zama American at Camp Zama, Japan.

Edgren evened its Japan Football League record at 1-1. The Trojans fell to 0-2.

That momentum came courtesy of Trojans junior quarterback Ben Bishop, who hit receiver Carlos Walters on an out pattern. Walters shook free of a tackler and ran down the left sideline into the end zone, completing a 40-yard touchdown reception and cutting the gap to 7-6.

Trojans coach Victor Rivera then opted to try for a two-point conversion and a one-point lead, instead of kicking for one point and playing for a tie. He called for a pitch-and-run play, sending Sandiko over left tackle.

The Eagles took advantage of a muffed punt snap with two minutes left in the first half. Edgren&#8217;s Darren Hall fell on the ball in the end zone and Patrick Pezoulas booted the extra point.

Burgeson, in his third year at the Eagles&#8217; helm, improved to 2-3 against Zama but sounded a warning that the Trojans could be a force to be reckoned with. Unlike past Zama teams, which were rife with dissent, players throwing helmets and bickering, this Trojans squad comported itself well, Burgeson said.