Johnson and Johnson a cure for Kubasaki ills 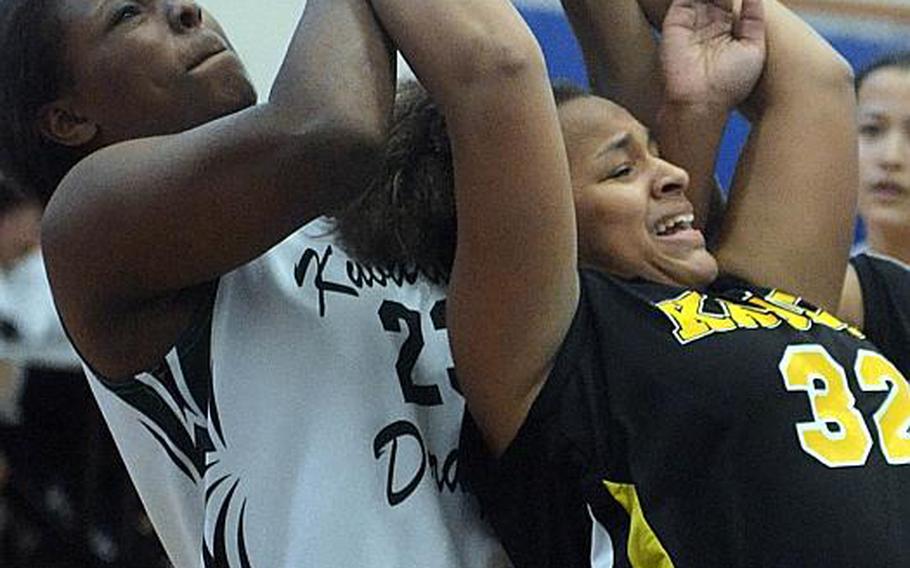 Kubasaki center Alyah Johnson, shown battling Kadena's Brea Garrett for the ball during the 8th Okinawa-American Friendship Basketball Tournament, transferred to Okinawa from Swansboro, N.C., and has become what coach Bob Driggs calls the team's "backbone" and "chairman of the boards" this season. (Dave Ornauer/Stars and Stripes)

Kubasaki center Alyah Johnson, shown battling Kadena's Brea Garrett for the ball during the 8th Okinawa-American Friendship Basketball Tournament, transferred to Okinawa from Swansboro, N.C., and has become what coach Bob Driggs calls the team's "backbone" and "chairman of the boards" this season. (Dave Ornauer/Stars and Stripes) 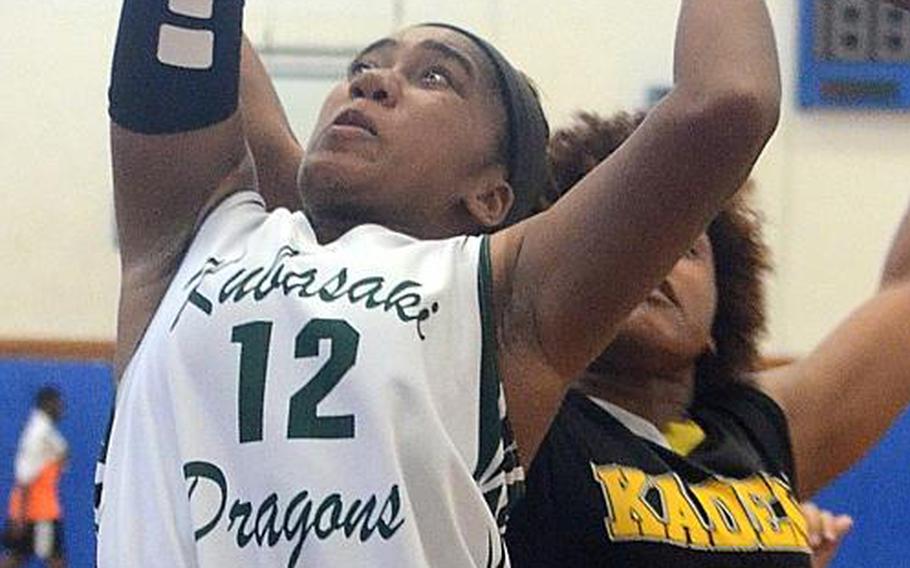 Kubasaki guard Sydney Johnson, shown shooting in front of Kadena's Montaya Jones during the 8th Okinawa-American Friendship Basketball Tournament, said she'd grown tired of what she termed the losing culture of Dragons girls basketball in her first three seasons, and is trying to help the team turn the corner onto a winning path. (Dave Ornauer/Stars and Stripes)

CAMP LESTER, Okinawa – Kubasaki girls basketball, the most decorated Division I program in Far East Tournament history, was mired in a stretch in which it went 35-142 from 2008-09 entering this season.

“The worst part is that people just expected us to lose,” said senior guard Sydney Johnson, who’s been around for three of those moribund seasons when they went 12-66 and lost every time they played arch-rival Kadena.

“That was the worst. People weren’t even asking if we were winning any more. And the team had the mentality of, ‘We’re losing; that’s OK.’ And I don’t accept losing.”

Slowly, that lack of acceptance is starting to pay dividends.

And a pair of players named Johnson, including senior transfer Alyah Johnson, is at the fulcrum of that turnaround.

The Dragons enjoyed their best day of the season Sunday, when they beat two Japanese teams convincingly and led Kadena by nine points before losing 45-37 in the 8th Okinawa-American Friendship Tournament finals.

The week before, they beat Storm, an adult team, 35-25 in the 20th Martin Luther King Invitational. They’ve played Kadena six times this season, winning only once but losing four other games by a combined 19 points. Kadena’s only big win came in an MLK knockout game 63-40.

And Kubasaki ended a 41-game regular-season losing streak to the Panthers last month, winning 48-42 on Dec. 20 at Kubasaki.

Why the change? Confidence, Sydney Johnson said, is a big factor.

Beating Kadena “sparked people up a little bit,” she said. “We’ve had skill in the past (but) we had no confidence. When we beat Kadena, it was like, hey, we’re not bad. We’re a good team and we have what it takes to win.”

“I see a growing team,” Alyah Johnson said. “I see a team that wants to come together and win. I see a lot of confidence. A lot of people knowing we were so close to beating Kadena in the first game,” a 46-39 loss at Kadena on Dec. 6, “that we could beat them and we did the second game.”

Behind Sydney, averaging 14 points and eight assists, and Alyah, 12 points, 15 rebounds and four blocks, the Dragons are 5-9 overall and can make the Okinawa season series a 2-2 draw with a home win Feb. 7 over Kadena.

“Both are seniors and are taking on the responsibility,” said Driggs, who’s coached Kubasaki to four of their nine Far East titles.

Alyah, who transferred to Kubasaki from Swansboro, N.C., has “really provided a backbone for us, been a big eraser down there, chairman of the boards and people are starting to realize that she’s a dominant force in the middle.”

“They send four people to the boards,” he said. “They’re crashing the boards and getting second- and third-chance opportunities to score. I think them beating us really did something for them. Now, they realize they can play. Kubasaki is right there in the thick of things.”

For their part, the Johnsons want to put behind for good what they and teammates refer to as the “Kadena block,” the idea that the Panthers should win every time they face the Dragons.

“Not just beating them by one or two points,” Alyah Johnson said. “Beating them by 15 or 20 points, which I know we can do. We just have to fix a few things and make sure don’t have that mental block when we play Kadena.”

What things need fixing? “A lot of focus during practice, making sure people’s heads are there, making sure we’re all comfortable with each other,” Alyah Johnson said.

“If we keep working hard, build up our confidence and work as a team and realize how good we are, we’ll be unstoppable,” Sydney Johnson said.