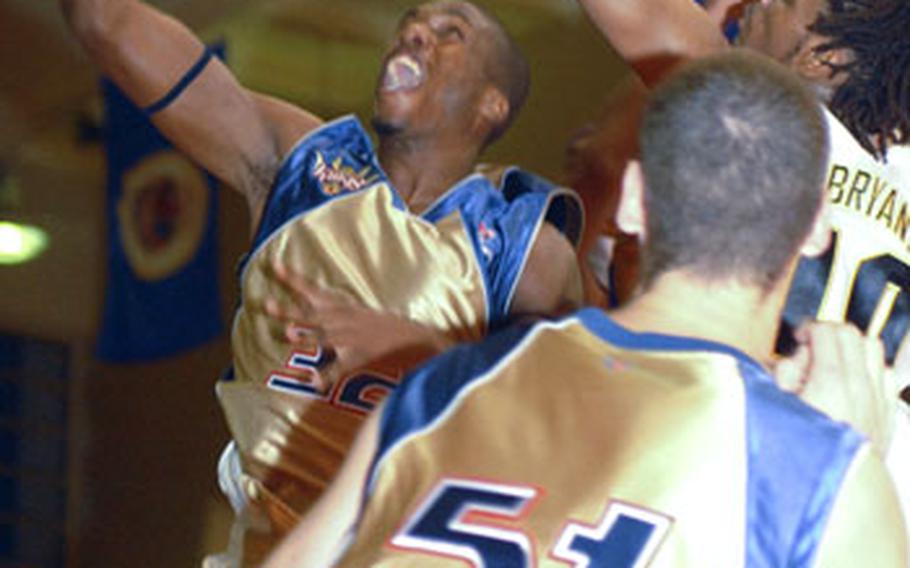 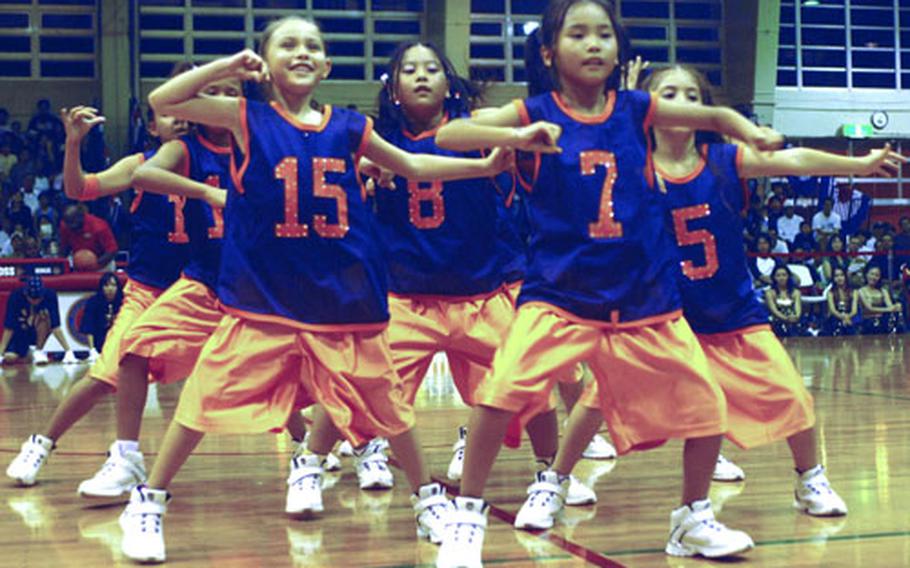 Members of T-Da, a hip-hop dance team of youngsters of American-Japanese descent on Okinawa, perform at halftime of Saturday&#39;s game. (Dave Ornauer / S&S)

He played his first professional game there as well, on Saturday night during a Basketball Japan League exhibition game pitting Simpson&#8217;s Ryukyu Golden Kings against the Tokyo Apache.

The Kings are an expansion franchise in the bjLeague. It includes 10 teams in two divisions, with franchises dotting the Japanese map from Sendai in northeastern Honshu to Naha on Okinawa.

The teams feature roughly a 50-50 mix of Japanese and foreigners. Most of the coaches are foreigners &#8212; including the Apache&#8217;s Joe &#8220;Jellybean&#8221; Bryant, a former NBA player and father of Los Angeles Lakers star Kobe Bryant.

Saturday&#8217;s game plus one Sunday afternoon coincided with Foster&#8217;s Oktoberfest celebration held over the weekend.

Having the bjLeague&#8217;s first games on the island at the Foster Field House was designed as a &#8220;give-back to the military&#8221; but also a way to attract American and Japanese fans. About 1,000 people saw Saturday&#8217;s exhibition.

&#8220;We wanted to give something back to the military and we also want GIs to come out and support us,&#8221; Simpson said.

The atmosphere at Foster Field House resembled that of an NBA game, with loud music and dance groups performing during breaks along with giveaways and a halftime half-court shooting contest.

&#8220;It&#8217;s great that they have pro sports on Okinawa. It gives something to Okinawans and Americans at a different level than the military,&#8221; Kadena Middle School substitute teacher Will Ware said.

Bryant, 53, a Philadelphia native, will enter his third season as Apache coach. He&#8217;s taken his team to U.S. bases frequently for exhibition games against base varsity teams and he calls such visits his &#8220;duty.&#8221;

The Ryukyu Golden Kings open the bjLeague&#8217;s season on Nov. 3 against the Oita Heat Devils of Kyushu at the Okinawa Convention Center in Urasoe. Tickets can be purchased at Lawson or Family Mart, or via e-mail at ticket@okinawa-basketball.jp. Learn more about the Kings at http://www.okinawa-basketball.