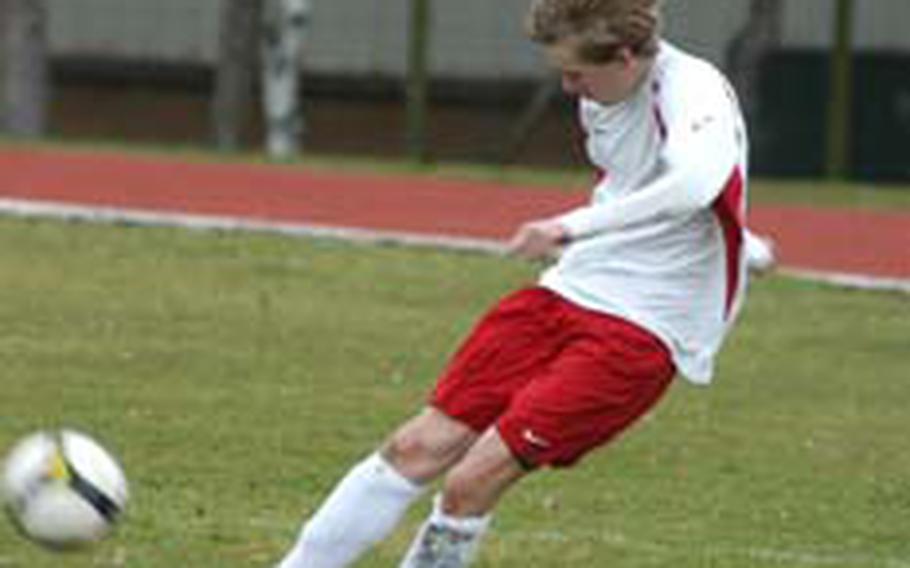 Lakenheath&#39;s Archie Robertson, a junior, drives a free kick during a game against AFNORTH on Saturday. The game was the season-opener for both teams and was won 3-0 by Lakenheath. (David Hodge / S&S) RAF Lakenheath&#39;s Jordie Davis corrals the soccer ball during a match against AFNORTH, March 20. The match kicks off the DoDDS soccer season opening weekend across Europe. Davis is a junior for the RAF Lakenheath Lancers. (David Hodge / S&S) RAF LAKENHEATH, England - RAF Lakenheath&#39;s Joe Sullivan and AFNorth&#39;s Aaron Black attempt to strike the soccerball with their head during the DoDDS soccer season opener March 20, at RAF Lakenheath, England. Black is a senior and Sullivan is a junior. (David Hodge / S&S)

The Italian private schools boys teams that usually dominate Region IV got right to the point Saturday by pinning an aggregate 19-3 defeat on their three DODDS-Europe opponents on opening day of the high school soccer season.

Marymount International School of Rome blanked Aviano 8-0, the American Overseas School of Rome thumped visiting 2009 European small-schools runner-up Sigonella 7-2, and Milan turned back visiting Naples 4-1 as a handful of teams got the 2010 season under way. Just 12 games, six each for boys and girls, were on the schedule, with eight of those scheduled for Italy.

Marymount boys 8, Aviano 0: At Aviano, Alessandro Ramacciato scored two of his three goals to go with a fourth-minute strike by Alessio Cangi and a 12th-minute tally by Paolo Muir to gave the Royals a 4-0 halftime lead.

The onslaught came, according to coach Mark Fix, despite heroic efforts by Aviano keeper Sean Wilson, who left the game with an injury just after intermission. The scoring avalanche continued in the second half with goals by Ramacciato, Mario Checi Gori, Nirosa Liayantha and Nicolo Manci.

Tyler Reed scored Sigonella&#8217;s goals, both in the second half. Reed&#8217;s first goal, two minutes after intermission, was unassisted; his second, in the 79th minute, came off a feed from his brother, Patrick.

Marymount girls 2, Aviano 1: At Aviano, All-European Elena Carrarini had a hand in Marymount&#8217;s two second-half goals, setting up Caroline Wiley for a 52nd-minute strike that tied the game 1-1, then scoring unassisted 17 minutes later for the decisive goal.

BFA girls 4, Bamberg 0: At Bamberg, defending European D-II champion Black Forest Academy rolled behind a goal and an assist from Rachel Kieffer. The champs led 3-0 at the half of the only Region III game scheduled.