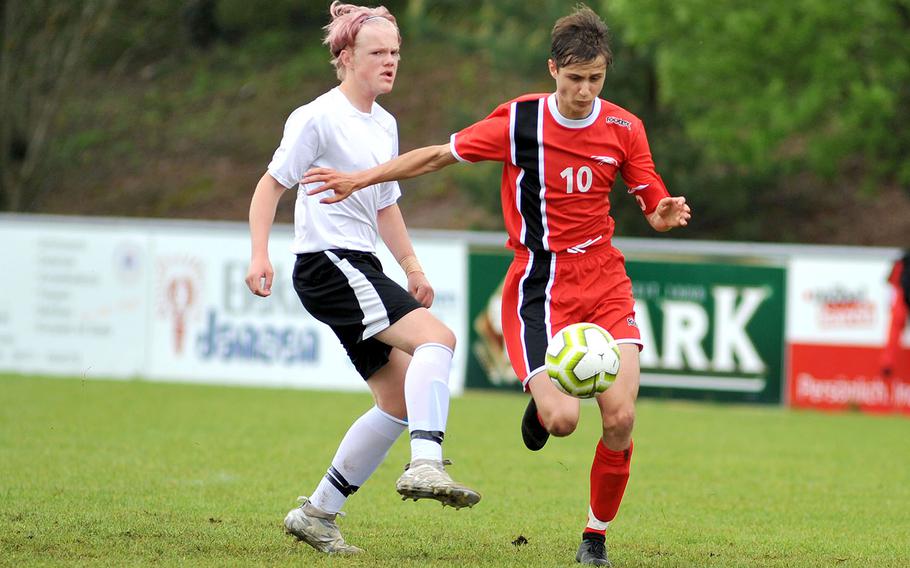 AOSR's Alessandro Ianni drives the ball up the field in a Division II semifinal against SHAPE at the DODEA-Europe championships in Reichenbach, May 22, 2019. Ianni has been named the Stars and Stripes boys' Athlete of the Year for soccer. (MICHAEL ABRAMS/STARS AND STRIPES)

Alessandro Ianni would have left American Overseas School of Rome with a memorable, accomplished career regardless of what happened in his final DODEA-Europe match.

But what happened in that match made it all the more remarkable.

Ianni played a role in each of his team’s goals in AOSR’s 4-0 defeat of Aviano in the 2019 DODEA-Europe Division II boys soccer championship game May 23, scoring three of them himself and assisting on the other. The brilliant performance scripted a perfect end to the senior’s AOSR soccer career and was among the reasons for Ianni’s selection as the Stars and Stripes boys soccer Athlete of the Year.

“His first love has always been soccer,” said AOSR athletic director Daniel Zacaroli, who said he has known Ianni since middle school. “It has been great watching him grow, both as a player and as a young adult.”

Ianni put that maturity on display in the European tournament. The goals did not always come easily for the favored Falcons, who fought through a 1-1 preliminary tie with Aviano and a 1-0 semifinal victory over defending champion AFNORTH to claw their way into the finals and earn a shot at the elusive Division II title.

That all changed in the finals as Ianni put on a masterful goal-scoring exhibition, starting with a beautiful solo score in the opening minutes that set the tone for a runaway AOSR victory.

“The moment I saw it went in I was going crazy,” Ianni said. “The team felt the energy, it was building up. We knew it was coming. We knew we had the skills.”

Ianni finished with 18 goals and 10 assists in 18 games this season. But his contributions were also of the intangible variety. Zacaroli said Ianni “worked to bridge gaps” between players of diverse ages and backgrounds on the team.

In short, Ianni enjoyed a senior season for the ages.

“He is the most talented player that I’ve coached,” AOSR head coach Giacomo Castelli Avolio said. “A true leader and captain.”