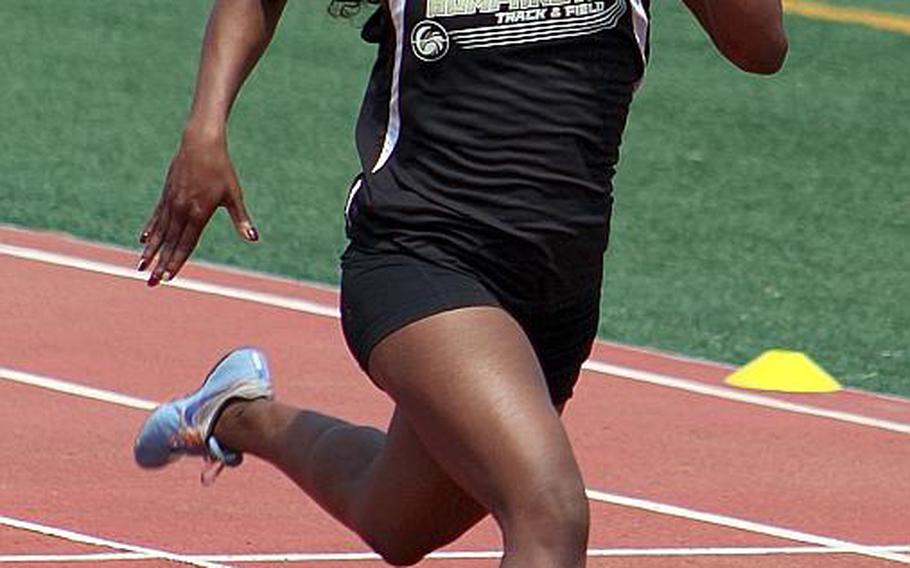 Humphreys junior Jaela Higgs went unbeaten in the 100-, 200- and 400-meter races for the Korea district and Far East Division I track and field champion Blackhawks. (Cierra Dennie/Special to Stripes)

Humphreys junior Jaela Higgs went unbeaten in the 100-, 200- and 400-meter races for the Korea district and Far East Division I track and field champion Blackhawks. (Cierra Dennie/Special to Stripes) 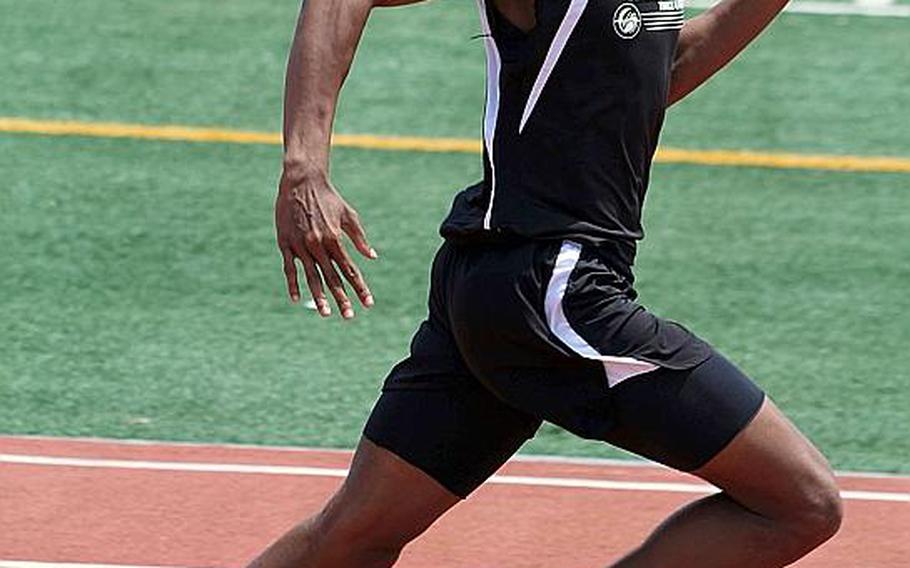 Humphreys freshman Tevijon Williams went unbeaten in the 100-, 200- and 400-meter races for the Korea district and Far East Division I track and field champion Blackhawks, setting a Pacific record of 10.77 in the 100 along the way. (Cierra Dennie/Special to Stripes)

CAMP HUMPHREYS, South Korea – It’s one thing for one track and field athlete to complete the difficult sweep of the 100-, 200- and 400-meter races during a full regular season and the district and state finals.

So two doing that at one school?

Tevijon Williams and Jaela Higgs each accomplished that feat for a Humphreys team that ran the regular-season table, won the Korea finals and became the first DODEA-Pacific school to sweep the Far East Division II banners one year and Division I the next.

Along the way, Williams, a freshman, went unbeaten and sliced at least one second off his times in the 100, 200 and 400, clocking the 100 in a Pacific-record 10.77 seconds at last month’s Far East meet, after which he retired the spikes he used.

Williams rewrote the Korea district boys record book, as did Higgs, who also went unbeaten and shaved nearly four seconds off her 400 time, from 1:01.73 on March 30 to 58 seconds in the Korea finals on May 11.

“It’s not usual that you see that,” said Blackhawks coach Ron Merriwether of his versatile sprint pair. “Once we saw that they could compete (in all three events), we knew it was going to be hard to beat us because we could put them anywhere. They were so flexible.”

And each of the sprinters say the best is yet to come.

“I wouldn’t say I’ve mastered it yet; I can get faster,” said Williams, who transfers to San Antonio after this school year.

Said Higgs, who plans to return for her senior year: “I think I could have done better.”

Their best this season was good enough. They earned the unofficial title of “Pacific’s fastest humans” and also Stars and Stripes Pacific track and field Athletes of the Year honors.

School officials also said the two were accorded Humphreys’ student-athlete of the year honors. And Merriwether said Williams and Higgs were each granted waivers to participate in the 53rd AAU Junior Olympics meet July 24-Aug. 3 in Greensboro, N.C.

From the start of the season, Merriwether said he has emphasized versatility and flexibility with his athletes, trying to get them to do a variety of events.

“Since it’s longer than the other races, it helped build my stamina for the 400,” she said.

Williams began the season running the 100 and 200 but had not tried the 400 until the fourth week of the season. He immediately began winning that event, needing just three weeks to break into the 49s.

“That opened our eyes,” Merriwether said.

For each of the runners, the worry was burning them out, he said.

“That’s back-to-back-to-back-to-back races,” Merriwether said. “That’s the big worry; would they be able to sustain it? Can you peak them at the right time and keep them healthy? It was hard. You’re just hoping. But they did.”

Both Williams and Higgs say they plan to make track their focus in the future.

“I came in running 12s and finished running in the 10s, so anything is possible,” Williams said.