Holifield sees a lot to improve on after third straight crown 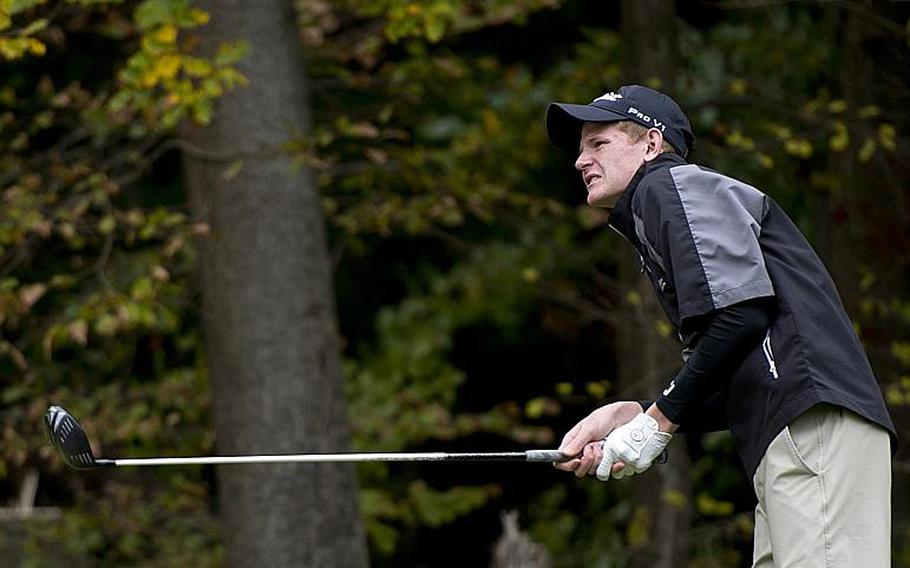 Stuttgart's Jordan Holifield watches his shot during the DODDS-Europe golf championship at Rheinblick golf course in Wiesbaden, Germany on Oct. 8, 2015. Holifield was selected as the 2015 Stars and Stripes boys golf Athlete of the Year. (Michael B. Keller/Stars and Stripes)

It seems there’s not a golfer in DODDS-Europe that can live up to the standard set by Stuttgart junior Jordan Holifield, the 2015 Stars and Stripes boys golf Athlete of the Year.

That includes Holifield himself.

“I couldn’t get any momentum going,” Holifield said after securing his third individual boys golf championship in as many DODDS-Europe seasons. “I couldn’t hit a shot the way I wanted to.

The fact that Holifield’s “bad day” included an extension of his European dynasty shows just how good the Panther junior really is.

Holifield made his mark on DODDS-Europe golf immediately upon his arrival in 2013, rocketing to the top of the leaderboard and claiming a surprise first championship as a freshman. He owned a more self-assured 10-point win as a sophomore the following fall.

As a result, Holifield entered his third season as a prohibitive favorite to win again. An unbeaten regular season set the stage, and a brilliant 42-point round gave him a substantial 12-point advantage through 18 holes of the 36-hole European championship meet.

That’s when Holifield finally faltered. Top rival Noah Shin of Ramstein shaved two points from Holifield’s lead over the second round, though his early edge was plenty to cruise to a double-digit overall win. His 95 combined points fell short of the 101 he’d produced in the 2014 tournament, though he won both by the same 10-point margin.

Holifield wasn’t pleased with the effort.

It’s safe to assume that such adversity – even if it didn’t truly jeopardize his championship reign – will serve as motivation as Holifield seeks to duplicate the four-year title run recently completed by Wiesbaden’s Jenna Eidem. Unless a freshman phenom lands on DODDS-Europe turf between now and next October – one like Holifield himself just two years ago – the Stuttgart ace will enter his senior year a favorite to round out the high school sweep.

Holifield, meanwhile, prefers to focus on his own game and let the numbers, as they generally do, fall in his favor.

“Scrambling, going back out there and working on the things I need to work on,” Holifield said. “Getting them fixed as soon as possible.”