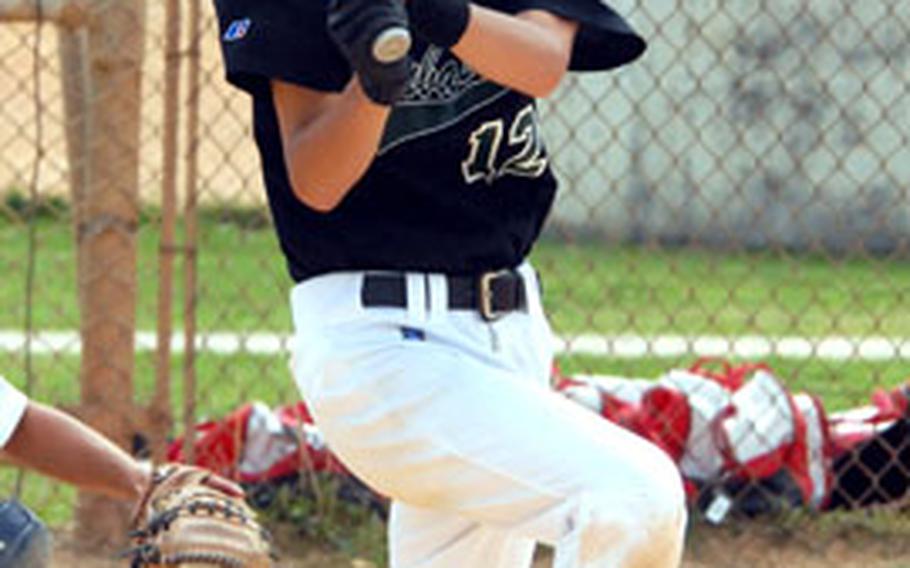 Patrick “Duck” Duffy lines a base hit during Kubasaki’s 11-2 victory over Ginowan B on Saturday at Chibana Recreation Area, Okinawa. (Dave Ornauer / S&S)

Patrick “Duck” Duffy lines a base hit during Kubasaki’s 11-2 victory over Ginowan B on Saturday at Chibana Recreation Area, Okinawa. (Dave Ornauer / S&S) 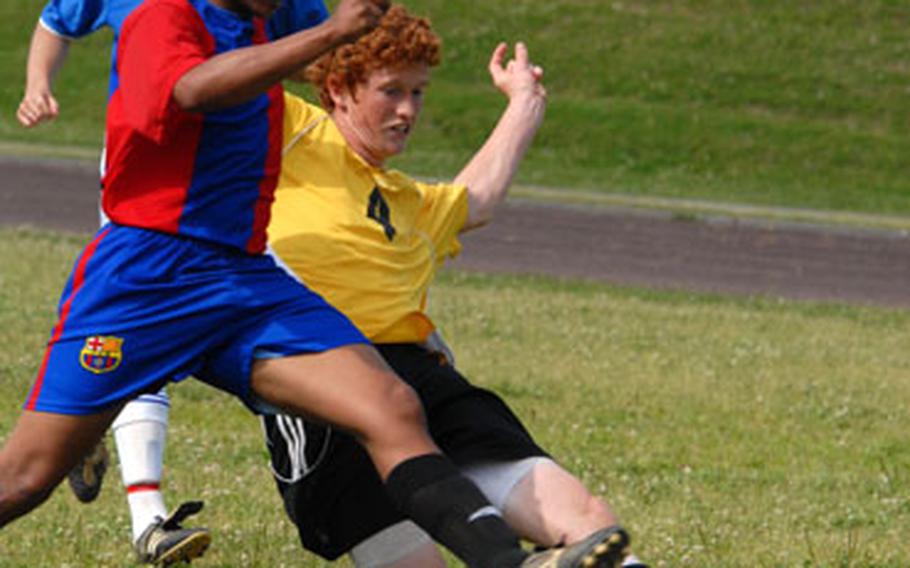 Kadena sophomore Stanley Schrock (4) taps the ball into the net for the first of his two goals as Yousef Philmont of Mil United defends. (Dave Ornauer / S&S)

Most pitchers who throw a one-hitter might expect also to win the game.

Not Tristan Heckerl. The Seoul American right-hander allowed a first-inning bloop single to Daegu American and no earned runs, but walked nine and saw eight Daegu runs score on passed balls in a 9-3 loss to the Warriors on Saturday at Camp Humphreys.

Hours later, his freshman brother, Colton, tossed a two-hitter and struck out eight as the Falcons routed Osan American 13-3 in five innings.

Seoul American, the preseason favorite to win the league, stayed in first place at 3-1. Daegu is 2-2, Osan American 1-3.

Tristan had the same speed on his fastball and movement on his curve he had when he threw a no-hitter in a 16-1 victory over Daegu two weeks ago at Yongsan Garrison. But junior Joe McLean, trying his hand behind the plate for the first time, had trouble handling the senior&#8217;s pitches.

Now a junior, Kim rewarded Harden&#8217;s faith, hitting two home runs in a 9-0 five-inning victory over Daegu, then trying her hand in relief and striking out four Osan American batters in a 12-7 victory over the Cougars.

Seoul American sits atop the DODDS-Korea standings at 4-0

The Mustangs (5-0) have outscored their foes 27-0. Coach Matt Whipple of Yokota (10-2) sees ASIJ, which finished seventh last year, as a legitimate threat to win the Far East Class AA title.

ASIJ coach Carlos Aranda credits the play of junior Melissa Walker, a transfer from Connecticut who plays a variety of defensive positions. &#8220;We&#8217;re definitely better than we were last year,&#8221; Aranda said.

The parade of Yokota freshmen newcomers continued at Sasebo Naval Base, where the Panthers boys (8-2) swept a three-match series 2-0, 2-1 and 2-0 from defending Class A champ E.J. King (5-9-1). New striker Andrej Gomez scored three of the six goals.

After going winless in their first seven games (0-6-1), Robert D. Edgren&#8217;s boys took three of four weekend home matches, getting four goals from sophomore Brandon Massie as the Eagles split with Nile C. Kinnick and swept two from Matthew C. Perry. Massie has eight goals on the season and 35 for his career.

On the girls side, junior Karla Stroud continues to show her appetite for playing forward. The converted defender scored three goals, running her season total to 12 as Perry won two matches against Edgren.