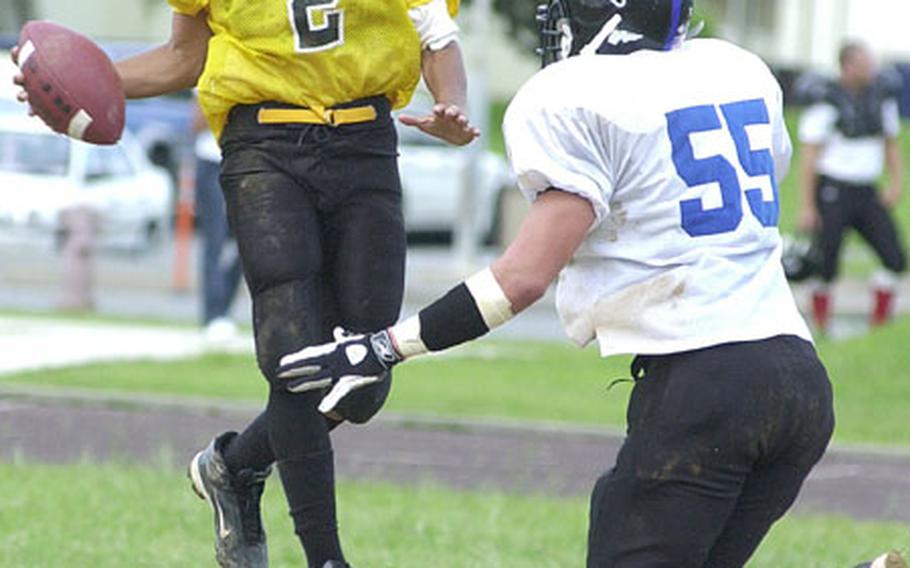 Kubasaki Shogun quarterback Rafael Mew (2) tries to unload the ball before being hit by Kadena Islanders defender Grady Pennell (55) during Friday&#39;s Okinawa Activities Council high school football game at Kadena High School, Kadena Air Base, Okinawa. Pennell sacked Mew on the play, one of his two sacks on the day. The Islanders forced five turnovers, recorded five sacks and held the Shogun to minus-53 yards in a 17-7 victory. (Dave Ornauer / S&S)

Yokota&#8217;s winning streak continues, but Nile C. Kinnick&#8217;s stingy defense and icky weather on Friday conspired to give the Panthers a scare.

Chris Roach scored on a 3-yard run early in the fourth quarter, and Stefan Welch&#8217;s extra-point kick proved to be the difference as the Panthers edged the Red Devils 7-6 in driving rain at Yokosuka Naval Base&#8217;s Berkey Field.

At Camp Foster, Okinawa, sophomore newcomer Lenard White fell on an end-zone fumble and later returned a kickoff 79 yards for a touchdown as the Samurai scored Kubasaki&#8217;s first victory over a Kadena team since the 2002 season, rallying past the Okinawa Activities Council defending champion Buccaneers 21-15.

The 2002 champion Samurai remained tied atop the Okinawa standings with the Kadena Islanders 17-7 winners over the Kubasaki Shogun.

Yokota 7, Nile C. Kinnick 6: It was the closest call Yokota&#8217;s had since edging the Kubasaki Samurai 3-0 in the 2000 Rising Sun Bowl, and the closest Kinnick has come to beating the Panthers since the 2000 opener, when Yokota nipped the Red Devils 12-7.

Yokota has won 42 consecutive games on the field, but had to forfeit two games in the 2002 season for using an inelibigle player.

&#8220;We figured it was going to be a battle of the lines and two great runners,&#8221; Yokota coach Tim Pujol said of Roach and Kinnick&#8217;s Leonard Lynce. &#8220;The conditions dictated everything. Throw out passing or anything fancy, straight-ahead power football and hard-hitting defense.&#8221;

Kinnick (2-1) had its way early, bulling close to the Yokota goal line three times in the first quarter, but not scoring.

After a scoreless first half, Kinnick broke through late in the third quarter when Lynce scored, but the extra-point was denied by Yokota&#8217;s Mark Dixon.

Roach finished with 167 yards on 25 carries and McCary had three returns for 72 yards. The Panthers uncharacteristically coughed up four fumbles.

Lynce was held to 58 yards on 10 carries and had four returns for 47 yards. Senior fullback Adam Krievs had 108 yards on 25 carries, a fumble recovery and seven tackles.

Kubasaki Samurai 21, Kadena Buccaneers 15: After going 1-7 last season, the Samurai find themselves tied for first on Okinawa, a perch they last occupied when they beat the Bucs 35-27 in the 2002 island championship game.

First-year Samurai coach Fred Bales refused to call it a &#8220;breakthrough&#8221; victory, but was happy nonetheless.

The Samurai had to overcome a 202-yard, one-touchdown rushing performance by junior Darnell Womach, who helped the mistake-prone Bucs outgain the Samurai 281 yards to 99.

Womach ran 80 yards for a score to make it 7-0 early and Tyler Schmidt tossed a 24-yard TD pass to Gary Wright to open the second half and give the Bucs a 15-8 lead. But four turnovers proved to be the Bucs&#8217; undoing.

Kadena Islanders 17, Kubasaki Shogun 7: At Kadena Air Base, Okinawa, the Islanders broke a 0-0 tie by scoring twice in a span of 1:09 in the third quarter, with each touchdown coming off a Shogun turnover.

Arnold Tillman fell on an end-zone fumble for the first score. Then Graig Monroe&#8217;s sack forced a fumble recovered by Grady Pennell that set up David McCowan&#8217;s 1-yard plunge early in the third. Ted Awana added a 45-yard field goal at the start of the fourth quarter.

Terrell Chavis cut the margin to 10 points with a 3-yard plunge with 2:09 left, after the Shogun blocked an Islanders punt.

Pennell had two of the Islanders&#8217; five sacks and one of the team&#8217;s four fumble recoveries. The Islanders forced five turnovers.