Danny Jones (22) of Heidelberg puts up a shot against the defense of Ramstein&#39;s Dre Chilton during the Generals&#39; 63-48 victory Monday in the championship game of the sixth annual Martin Luther King Jr. Basketball Tournament. Jones was voted the tourney&#39;s most valuable player. (Rusty Bryan / S&S)

Danny Jones (22) of Heidelberg puts up a shot against the defense of Ramstein&#39;s Dre Chilton during the Generals&#39; 63-48 victory Monday in the championship game of the sixth annual Martin Luther King Jr. Basketball Tournament. Jones was voted the tourney&#39;s most valuable player. (Rusty Bryan / S&S) 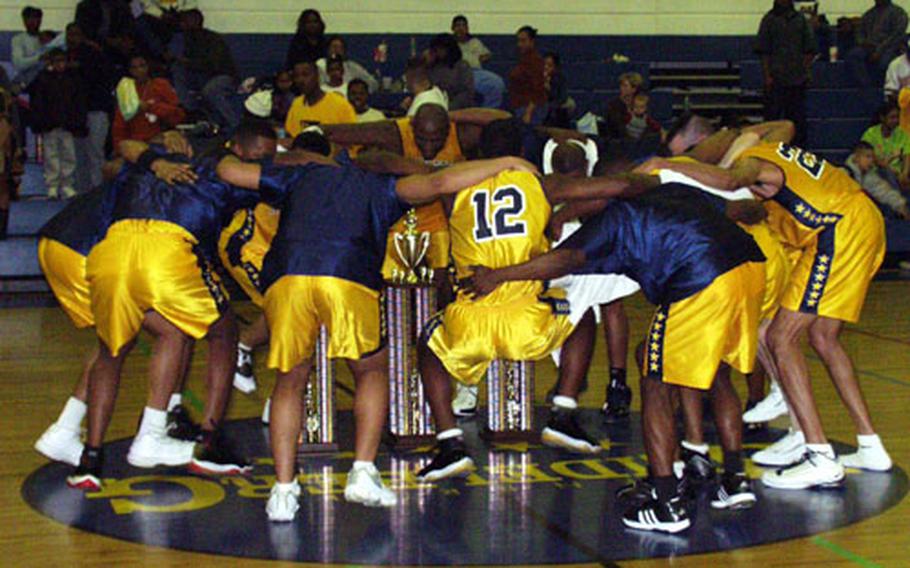 The Heidelberg men&#39;s team huddle in the middle of the gym following the trophy presentation Monday at the end of the of the sixth annual Martin Luther King Jr. Basketball Tournament. Heidelberg swept the tourney as the women&#39;s team also finished first. (Rusty Bryan / S&S)

Heidelberg&#8217;s women, for the third time in four days, defeated W&#252;rzburg, this time 40-28, and the Heidelberg men, for the second time in two days, turned back Ramstein, 63-48. The victories completed unbeaten runs through the tourney for both teams.

The opponent in the final wore jerseys that read Kitzingen, but Heidelberg was plenty familar with the team representing the W&#252;rzburg community in this tournament since it had beaten the Lady Rattlers Friday and in Sunday&#8217;s winners-bracket final.

The plan worked as designed as Heidelberg took a 20-12 halftime lead over a team that had earned its slot in Monday&#8217;s title showdown with a 64-48 victory over Mannheim earlier in the day.

The result was a decisive 11-3 run to start the second half that included four Collins free throws in four tries and a classic feed to tourney MVP Rhonda Williams on a fast break that resulted in two of Williams&#8217; game-high 11 points.

The championship was the fourth straight tourney crown for Heidelberg. The Lady Generals won last season&#8217;s U.S. Forces event, and all three of this season&#8217;s holiday events: Columbus Day in Darmstadt, Christmas in Kaiserslautern and their own MLK event here.

In what looked much like a replay of the Generals&#8217; 57-47 winners-bracket victory over Mannheim on Sunday, Heidelberg turned around a soft first-half effort on the boards to win going away.

Ramstein, which fell to the Generals 66-57 on Sunday, held a 28-26 halftime lead on Monday, largely on the strength of second-chance shots at the basket.

That all changed at halftime.

Heidelberg took care of that problem and with it the challenge of the Rams, who earned their rematch against the Generals with a 48-45 victory over Mannheim earlier Monday.

Also effective in the second half was tourney MVP Larry Jones, who scored 12 of his 14 points after intermission. He hit field goals to tie the game at 28, 39 and 41 in the first 9:10 of the second half, then sank six free throws in six tries in the final 7:50 as the Generals put the game away.

Newcomer Craig Marcelin picked up part of the load. The all-Armed Forces player, who stepped off the plane and into the Heidelberg lineup on Thursday, scored 22 points and turned in a strong defensive effort.