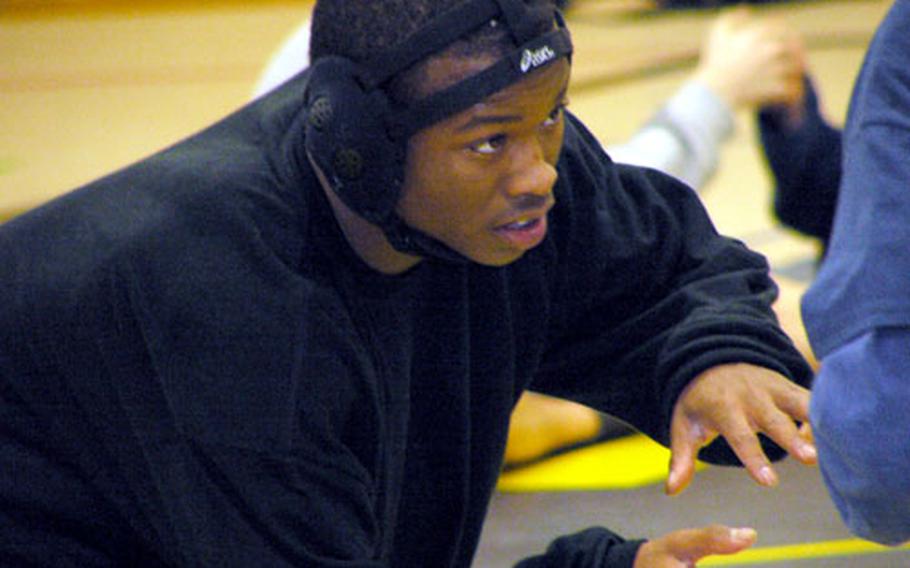 Undefeated Heidelberg 112-pounder Kuani Tillman has an intense look on his face as he watches for an opening against sparring partner Zach West during a practice Tuesday in Heidelberg, Germany. (Rusty Bryan / S&S)

Tillman has been pondering this season&#8217;s championship tournament since last February.

Campos is back for Naples, but he is wrestling two weight classes up at 125.

Tillman is a 5-foot-2 bundle of energy and outspokenness who improves daily, according to Heidelberg coach Warren Kimmerly.

&#8220;I wish I had him in a school in the States where he could wrestle year-round. He&#8217;d be a state champion in almost any state,&#8221; Kimmerly said as his squad ran through conditioning drills.

Unlike many wrestlers, Tillman&#8217;s no gym rat. He claims he does no weightlifting and little conditioning outside of practice. He does push-ups, but not necessarily for wrestling.

Anger and frustration, he said, were responsible for launching his wrestling career when he was in the seventh grade.

The only trouble Tillman gets into these days is on the mat, and it doesn&#8217;t last long, according to his coach.

Tillman sees himself as a scrambler.

Tillman credited his coaches, injured teammate Andrew Moon, second in Europe at 125, and his lifelong work with younger brother Leon, Heidelberg&#8217;s 103-pounder, for much of his progress.

Tillman, whose family hails from Tennessee, hopes his next move takes him to a wider stage.