Has Okinawa’s dominance run its course? 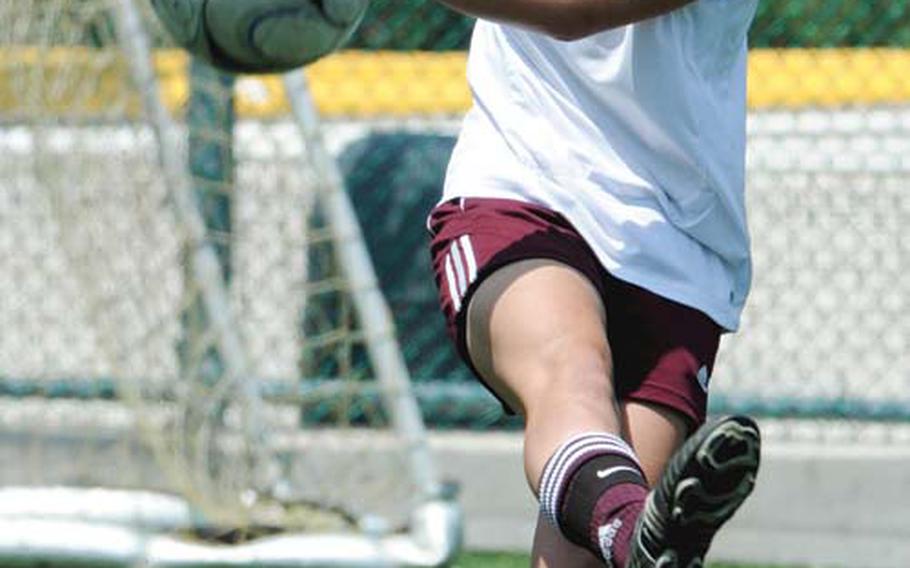 Heather Hyson will suit up for Kubasaki this season after transferring from M.C. Perry. (Dave Ornauer / S&S)

CAMP LESTER, Okinawa &#8212; Chris Eastman still shakes his head when he thinks back to last spring, when not one Okinawa soccer team won a Far East Class AA Tournament title for the first time since their inception in 1998.

"I was shocked when Zama won" the girls title last May, said Eastman, first-year coach of Kubasaki&#8217;s boys and a veteran of the Far East tournaments as a player with Kadena in the late 1990s. "Hopefully, things will return to normal."

But given how things have gone since 2005, one has to wonder, just what is normal?

From Eastman&#8217;s days until 2004, Kadena and Kubasaki combined to win five boys and five girls titles; only three times did a non-Okinawa school even reach the finals.

Since then, Christian Academy Japan has won three boys titles, while American School In Japan and Zama American have won the last two girls championships.

"They&#8217;ve caught up," Kadena boys coach Tom McKinney said, adding teams have "discovered what they need to do" against Okinawa teams, building defenses to stop certain players, exposing weaknesses and convincing good athletes in other sports to play soccer to build their programs.

Kubasaki and Kadena possess "excellent coaching and great players," Collier said. Their players play year-round, he said, with off-post Japanese and on-base men&#8217;s club teams. And the weather is conducive to it. "You just don&#8217;t get that in Kanto," he said.

So, what has made CAJ so successful? Good team chemistry and the ability to keep players from middle school to graduation, Collier said. Many are Japanese or Korean who&#8217;ve played club ball from a young age.

Then, there was that 2005 breakthrough, beating Kadena 2-1 in overtime for the title.

"Once you break through that psychological barrier, it&#8217;s huge," Collier said. "You beat Kadena once, it&#8217;s going to change everything for future teams."

Working in Kubasaki&#8217;s and Kadena&#8217;s favor are the recent arrivals of transfers Heather Hyson, formerly of Matthew C. Perry in Japan, to Kubasaki, and sisters Bria and Jasmine Pressley, formerly of Class A champion Osan American, to Kadena.

They&#8217;ll battle to wrest the title back from Zama American, which lost most of its scoring firepower in sisters Aubrey and Mallarie Ashliman, but in their place got junior Taylor Cave from Virginia.

With most of its firepower in Karla Stroud and Danielle Dobson having graduated, one coach sees a three-way battle between Daegu, Osan American of South Korea and Robert D. Edgren of Japan in Class A.

Edgren, which tasted some success at Far East going 4-3-1 after an 0-12-1 regular season, might have its own transfer weapon in Jen Black, late of Yokota. "Edgren didn&#8217;t have that spark at the end" last year, Thompson said. "Jen Black just might provide that."

On the boys side in Class A, two-time defending champion Yongsan International-Seoul, with strikers Jona Park and David Kim returning, have "set the bar," Perry coach Mark Lange said.

"They&#8217;re in a different class, no question about it," Lange said. "They have good players, they seem to have a better understanding of the game, a sixth sense, than the other teams we play."